Tynehead is a classic Green Road that sits high up on the Cumbria/Northumberland border. Remote and prone to unpredictable weather, it's an adventure any time of the year. However, it's not immune to the unprecedented floods that hit the region this winter, as Steve Stout found out as he pulled together a team of TRF volunteers to repair a crucial bridge at risk of collapse. Would they be able to repair it in time?

Hi Steve. I hope you've recovered from what looked like a hard days work out in the Pennine Hills. Could you tell us how the bridge repairs at Tynehead came about?

On a Northumbria TRF ride one weekend in early January Greg took some photos of the bridge as we passed over it for the Cumbria & Northumbria Facebook pages. One of the lads picked up on the bridge being flooded and pointed out the potential for the bridge to collapse. It was decided that as it was a lane in Cumbria, CTRF would sort it out and I was asked to organise a repair day. Water runs over the bridge after the December floods. Left like this and the structure would eventually collapse.

I'm guessing that to do this kind of work you need to get relevant permissions?

Yes, as this lane is a UCR, you need either the Highways or the Land Owners permission, for us it was easier to track down the land owner as we had a local who thought he knew who it was. That local was Danny Taylor who runs Haggs Bank Bunkhouse near Garrigill. With a few questions around the local community and a few drives up the lane of the farm, he managed to establish contact and get us permission. This took a bit of negotiating and we had to write a letter of assurance that we would work around the bridge area only but Danny did a sterling job and got it all sorted out for us.

So how did the day unfold? Did it all go to plan?

Yes it did really, we were done by 2pm and heading home, which was better than expected. We had a list of about 10 names of folk who said they would turn up to help out from Teeside, Northumbria and Cumbria TRF, then we had visits from the Ribble Valley guys who pitched up on their bikes and spent a great 2 hours sorting the flow out on the upper part of the river. Scott Heyden and his Dad did a superb job of moving lots of rock and worked with Danny under the bridge shoring up the blocks that had been moved in the floods. Geoff Wilson did a brilliant job of passing on some of his knowledge and the whole team just worked well together. I thoroughly enjoyed myself, splashing around in the river, learning some new skills and above all preserving a lane I use a lot and really enjoy. It was great to see the teams working together and see the happiness as they all realised we’d got the flow and the bridge sorted for the next few years.

Technically, what was done to the bridge and do you think it will hold up against the challenging weather that the area sees throughout the year?

The jobs that needed to be done sort of ran across each other, so we split into four teams, those working on the bridge and three working either under or on the upstream side of the bridge. The bridge itself had all the sets relaid on its surface, this will protect it from the bike tyres as they pass over it and Geoff was instrumental in getting this done in a way that will last. 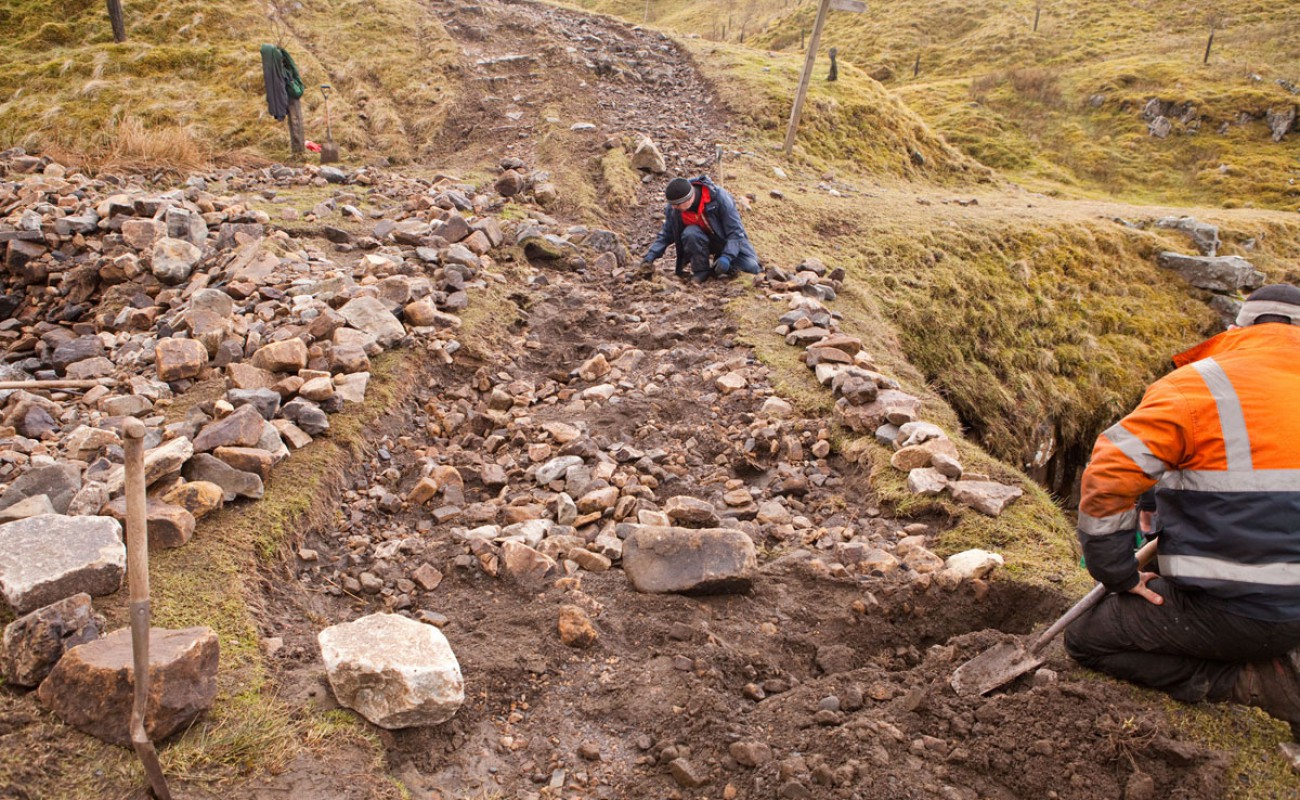 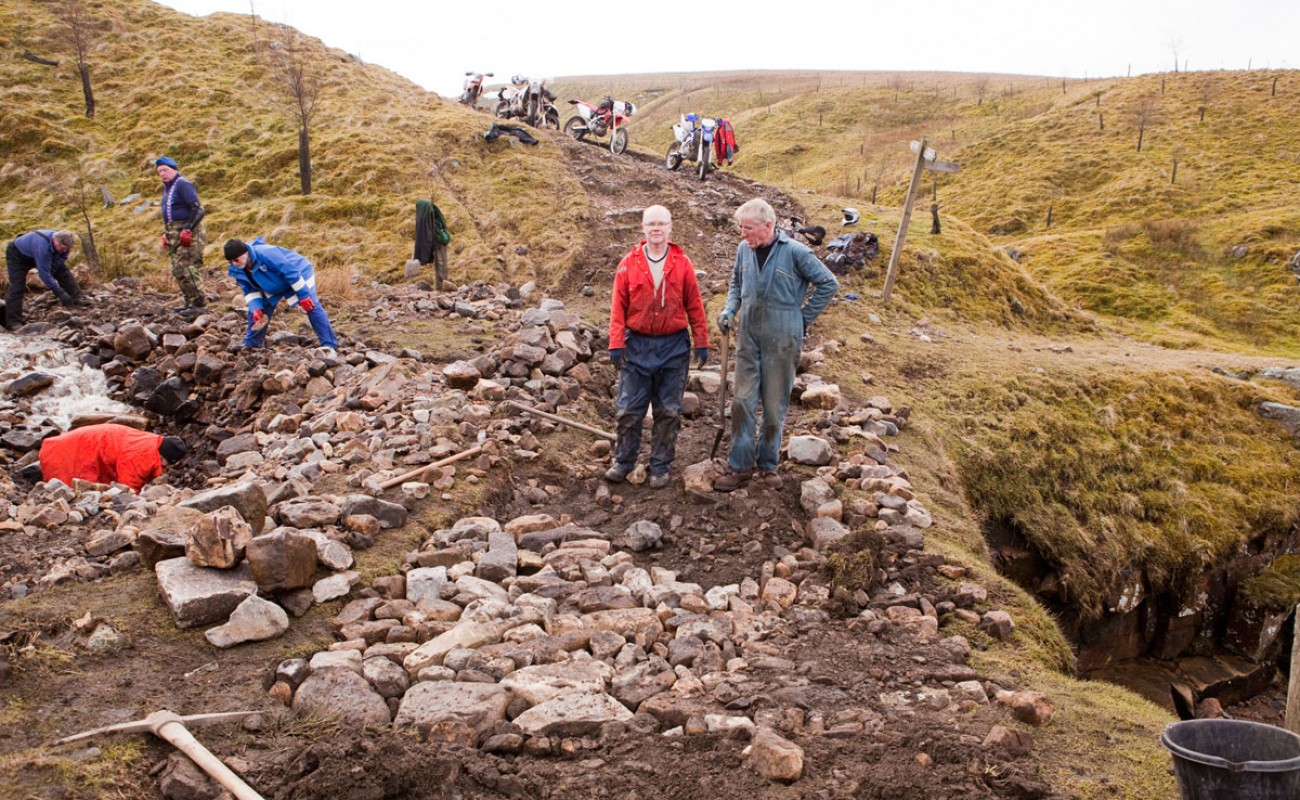 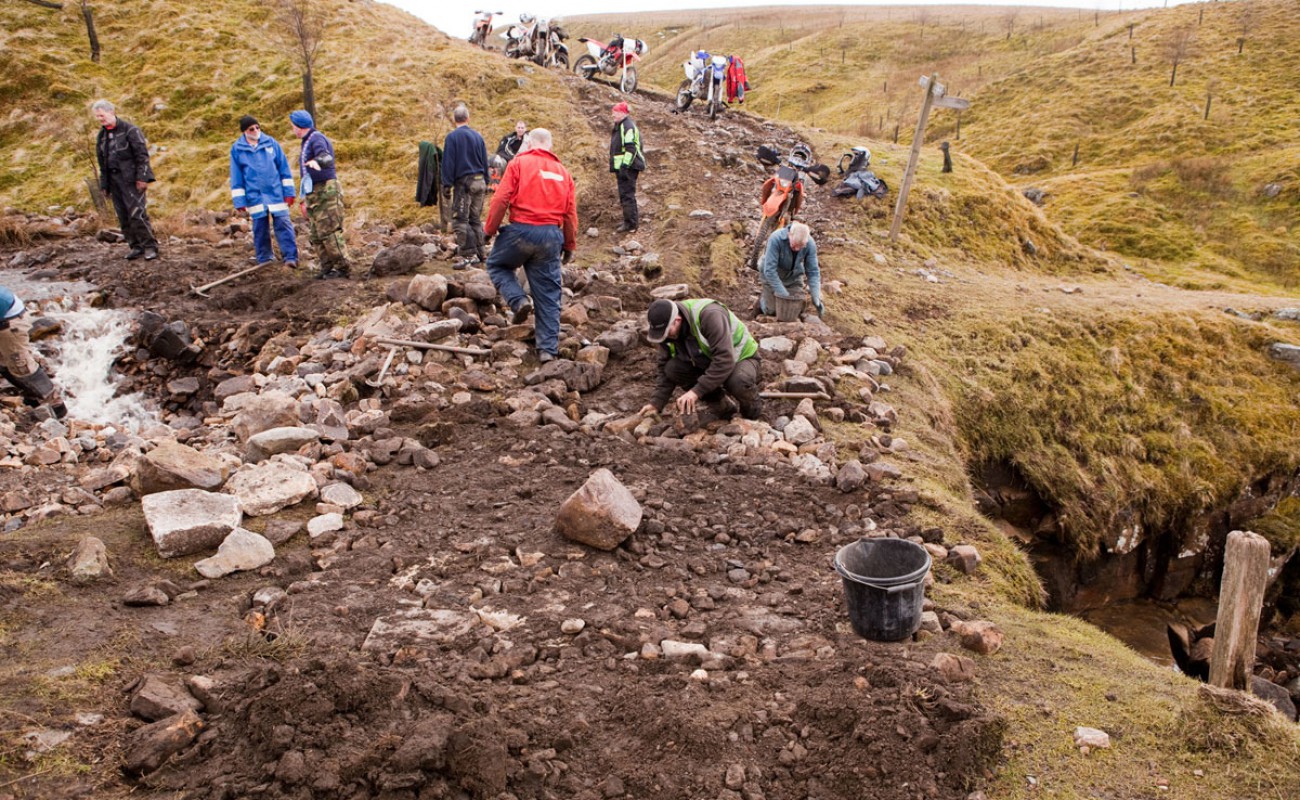 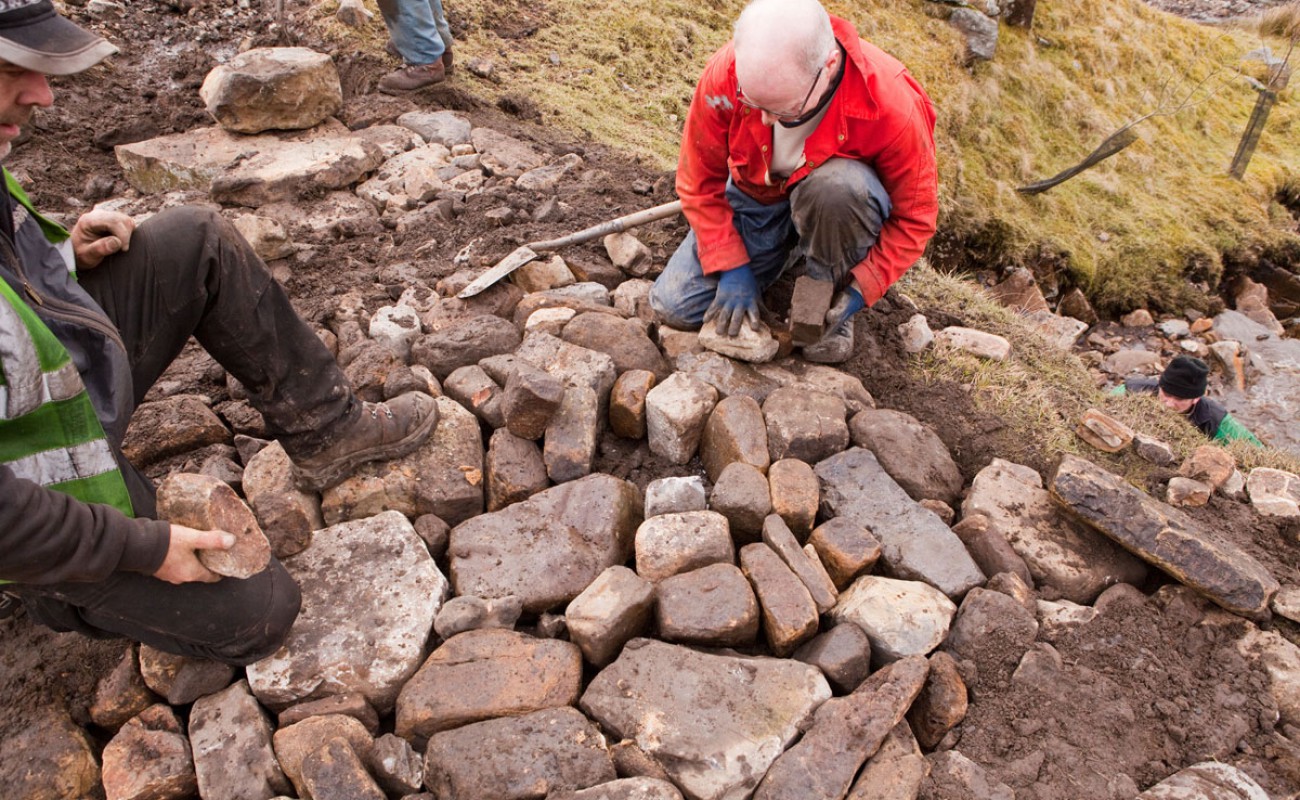 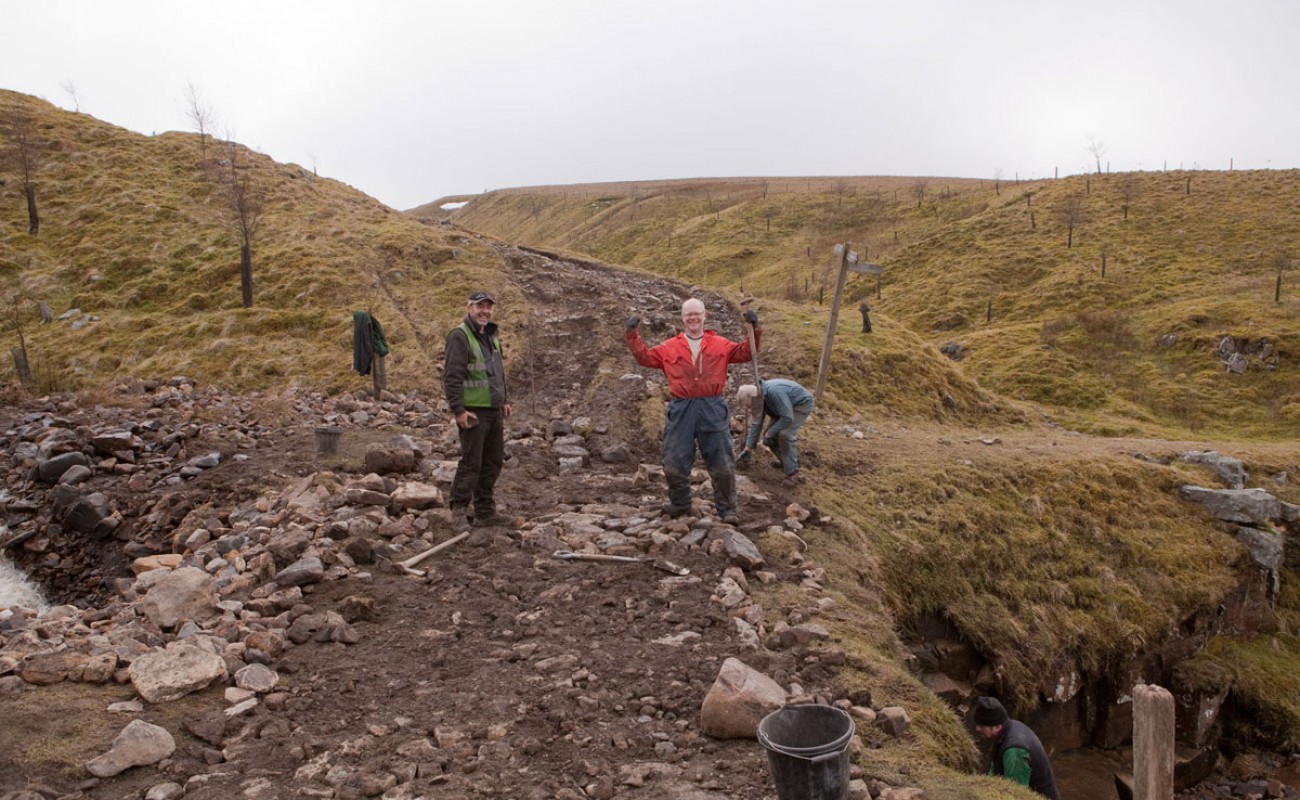 The team clear stone from the top of the bridge before re-packing it. The stones are placed in such a way to add strength and reduce the chance of them moving.

The block that had made the entrance half its size was moved under the bridge and used to fill in a big hole in the side wall. It had to be winched upstream first, the stone underneath it cleared and a path made to get it under the bridge. Another block higher up the stream that was diverting the flow into a bottle neck was lowered under the bridge and used to fill in another hole on the left hand wall. The whole upstream bed of the river was widened and flattened out to make the flow of water run smoother and back into a straight line. We used the larger stone from the riverbed to build a protective wall along the edge of the river so that the flow was directed under the bridge. The upstream face of the bridge has several new large blocks put in place to protect the bridge from a strong flow in the future. As a final job we moved some bigger stones to block off a section of the edge of the trail that some 4x4’s and a couple of bikes had tried to use. This had left unnecessary ruts and some damage to the side of the lane. Unless we have some terrifically huge storm it should all hold up well for a few years now I hope.

The winch mechanism that you used to move the big boulder was pretty neat. Where did that idea come from?

Geoff brought the winch with him and I applied techniques learnt from mountaineering and working in the Antarctic to build the anchor to secure it too. We also had some long industrial slings we then used to hold the blocks in place. It was pretty quick and easy to do really.

Our winch anchor was a builders bag that large amounts of sand and the like are delivered in. There were no suitable trees or blocks nearby so we just filled the bag full of rocks and then used one of the slings around it to act as a tether for the winch. Simple and easy.

It looks like you had a lot of help. I guess this kind of project can't exist without volunteers?

Everybody involved was a volunteer, they all did a lot of physical work on both the days that work was carried out. Total respect goes to the Geoff, Steve Pighills and Robert Wilson for the intervention work they carried out in freezing conditions in early January, their work laid the foundation for the work the rest of us did the second day. A massive thanks goes out to all the people who got involved, we laughed, swore, sweated and all met new people for a gossip. It’s one of the reasons I like being a member of the TRF really.

I saw like minded people putting in some effort for a past time they love and feel passionate about. Giving something back to a community and also seeing a direct benefit for their efforts.

Most of the people involved had driven a minimum of an hour to get there and just rolled up their sleeves and got on with it. No fanfare, no showiness needed just good old fashioned British honest effort. I think if more people could do this across the country and show this level of passion for their past time we would have such a positive force which then sets us in a whole different light.

Do you enjoy riding Green Roads? Are you prepared to volunteer one day of the year to help conserve them?

The TRF are active in helping to conserve the Green Road network and work with volunteers throughout the country all year round. You can play a part in making sure we continue to be able to enjoy trail riding in the UK. Sometimes it really is as simple as helping to move some rocks.

Get in touch with your local TRF group to find out what is going on and how you can get involved. 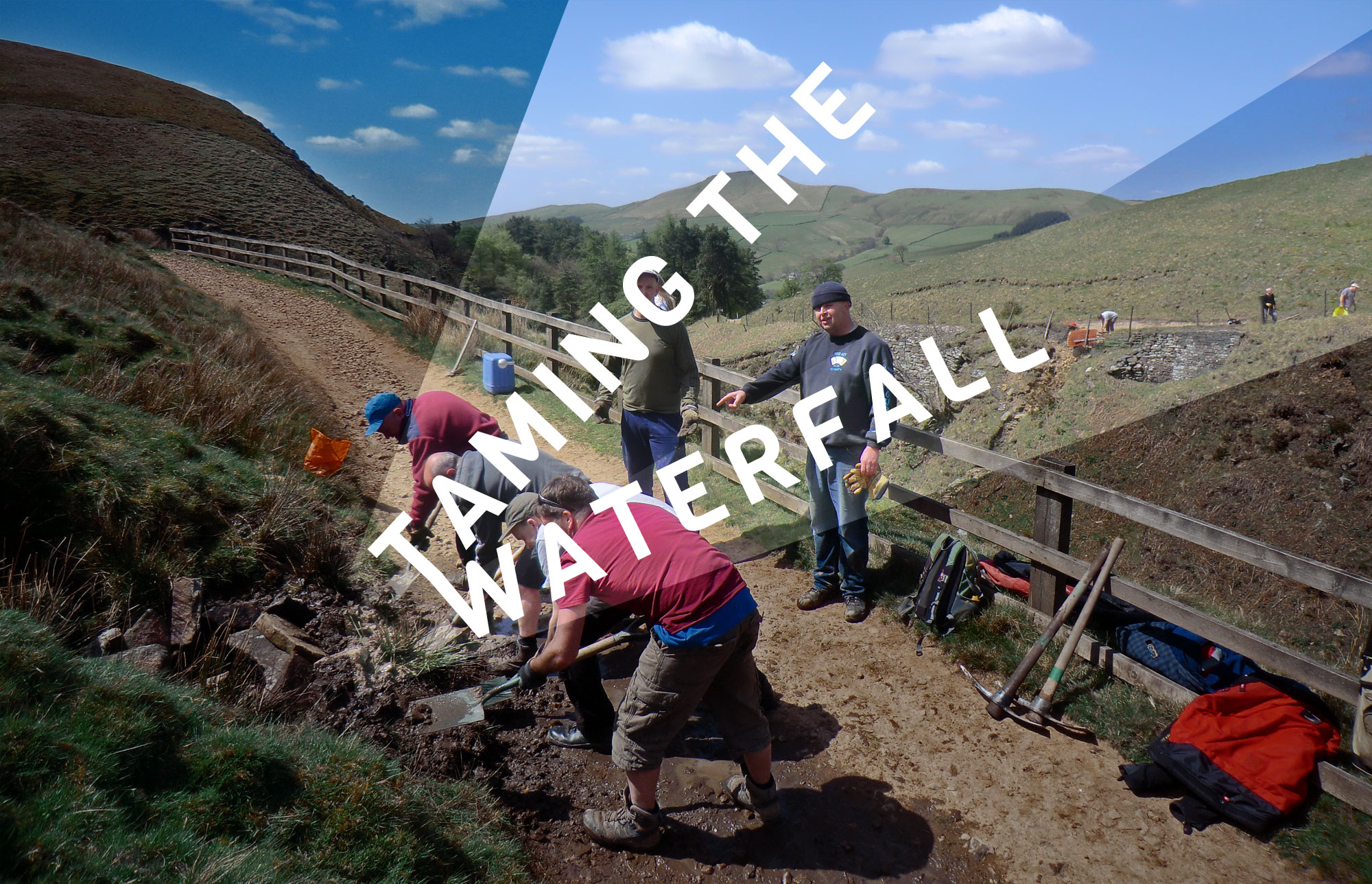