Hiring the TRF for horse events

This October saw Northumbria TRF hold their first ever Hadrian Adventure Weekend. Billed as 'Trail riding on the edge of the Roman Empire', the weekend attracted TRF members from all over the country and beyond, keen to get a taste of the riding on England's most northern green roads. Co-organiser Greg Villalobos explains how the weekend went and just how you cope with one of your riders falling into the River Tyne… sort of.

The Hadrian Adventure Weekend is the brainchild of Tony Huntrod, Northumbria TRF's new group chairman who was excited at the prospect of helping TRF members from all over the country explore some of the most remote lanes in England as well as raise important funds for the club. There had been a lot of attention on the north east due to the successful 'Save Hexham Lane' fundraising campaign and in some ways this was a way of saying thank you and showing trail riders the green road network that their donations were going towards conserving.

Based out of Haltwhistle, the geographic centre of Great Britain, sixty trail riders from as far afield as South London and even Denmark converged on Herding Hill Campsite in glorious Friday sunshine. Tents were constructed, caravans plugged in and for those who had booked them, hot tubs bubbled outside the luxury wigwams. Beers and pizzas were enjoyed as the sun dipped below the horizon. It was going to be a great weekend.

So you can imagine the surprise at waking up early on Saturday morning unable to see more than 5 yards. 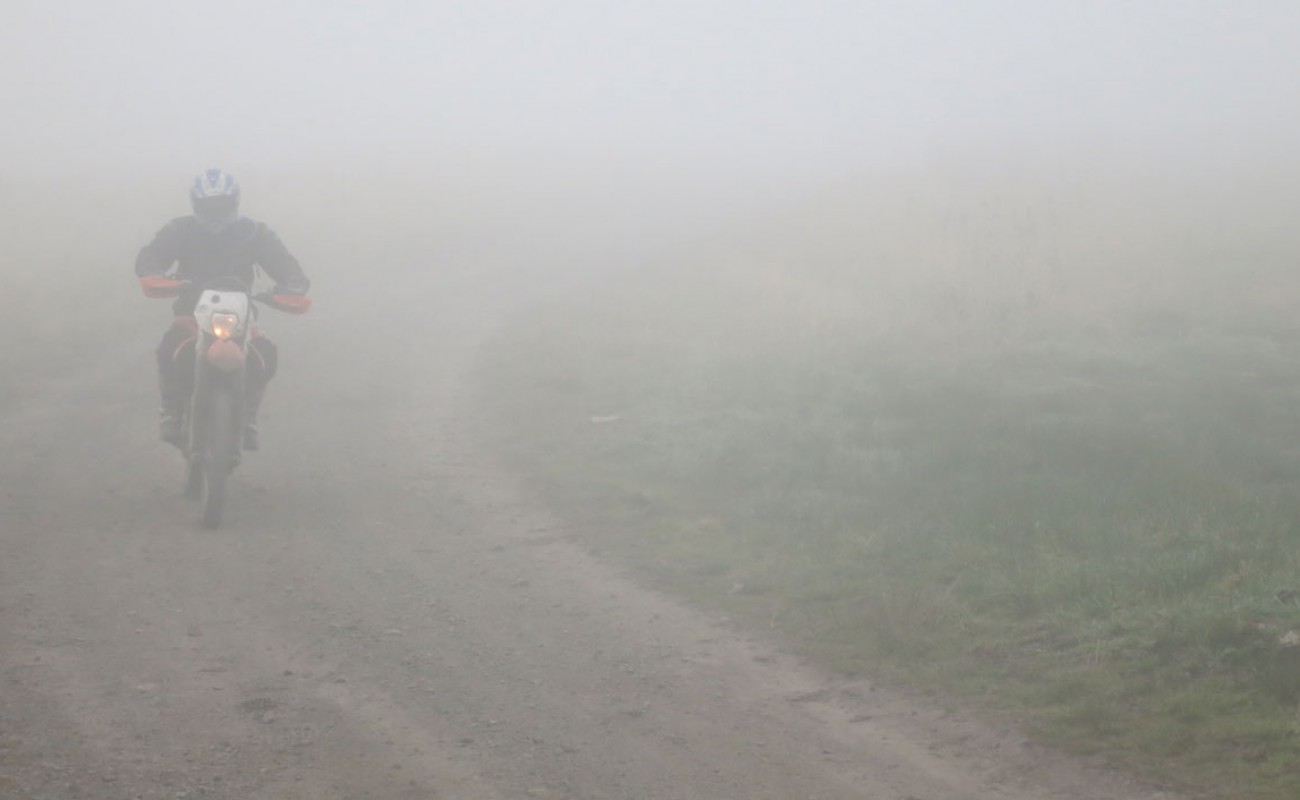 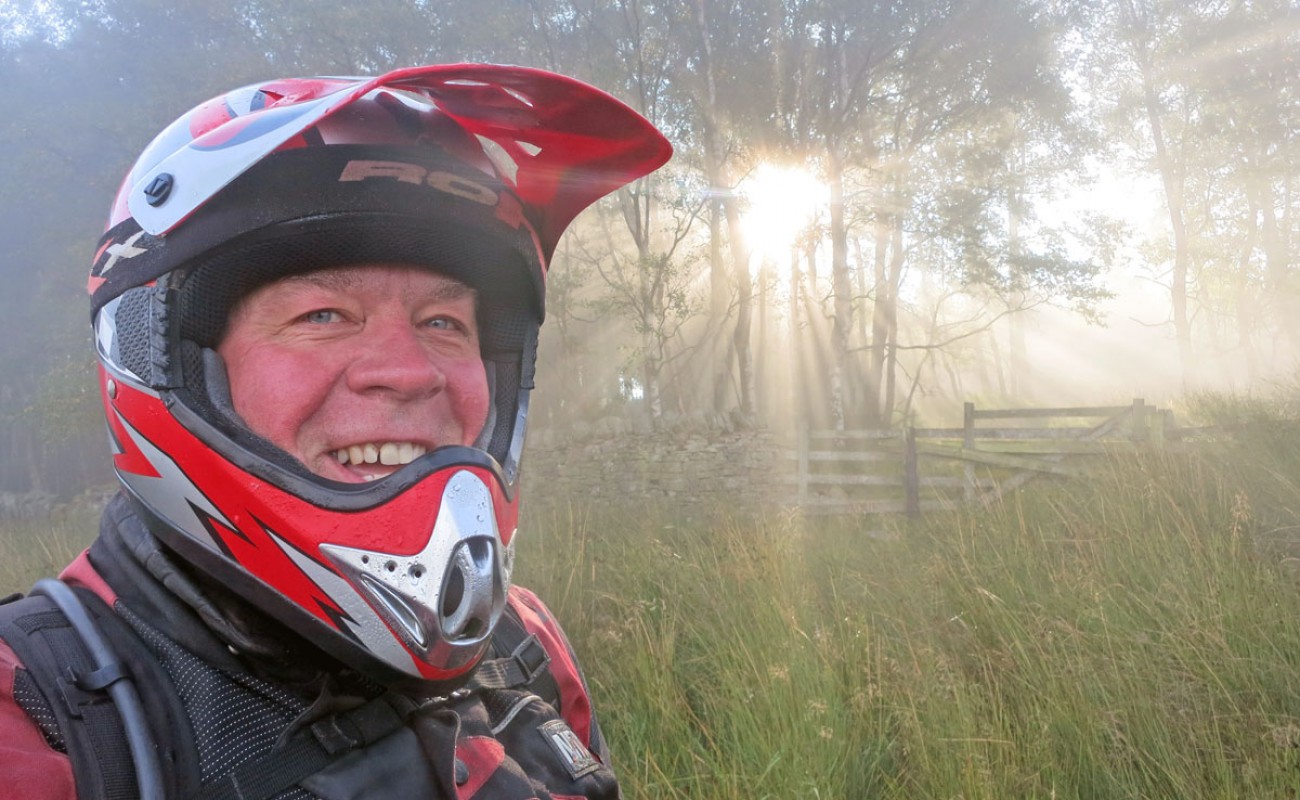 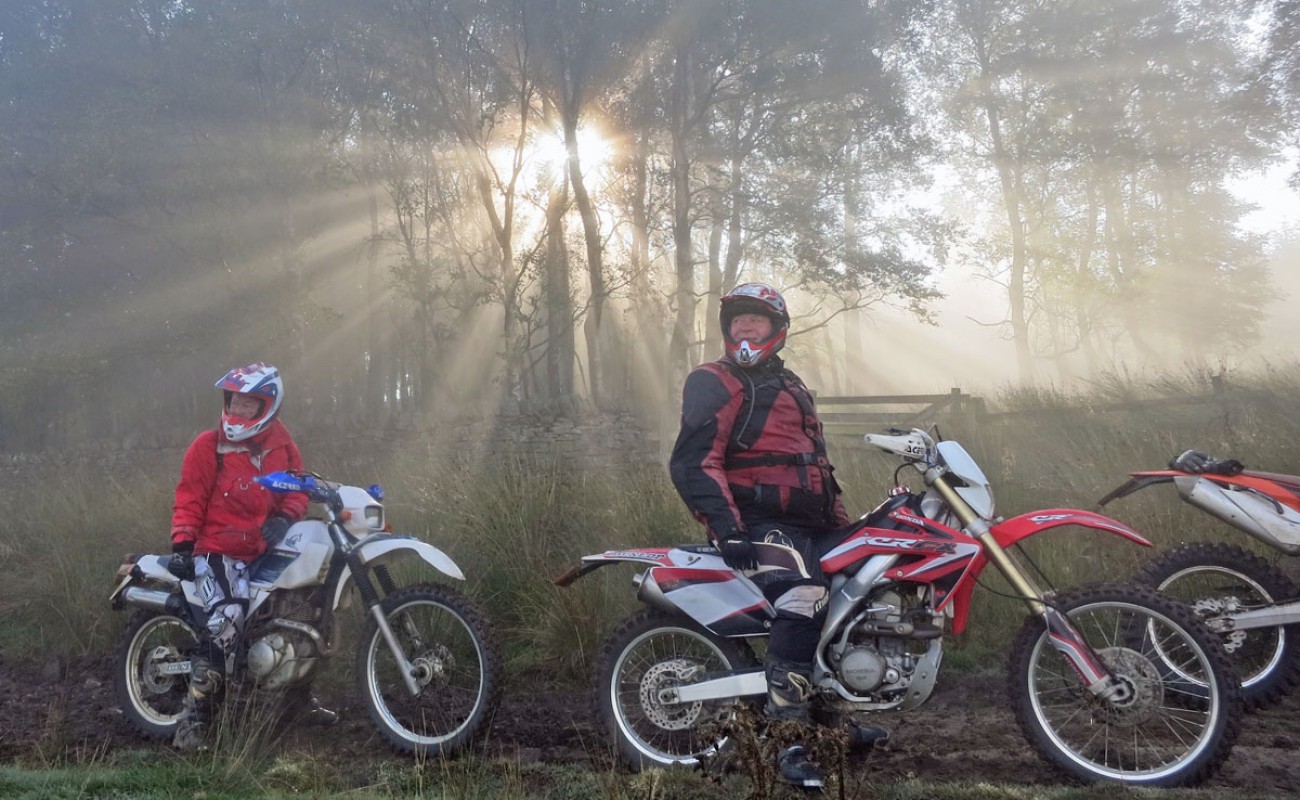 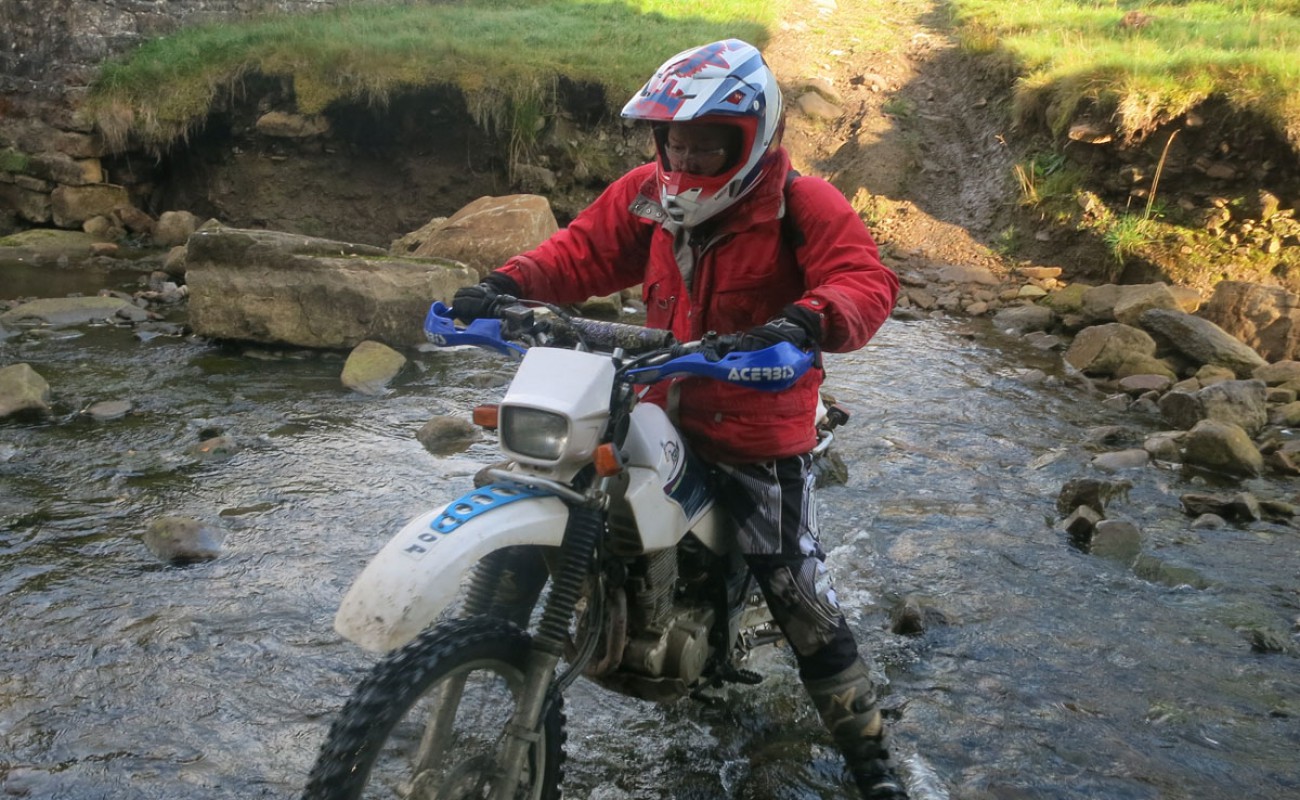 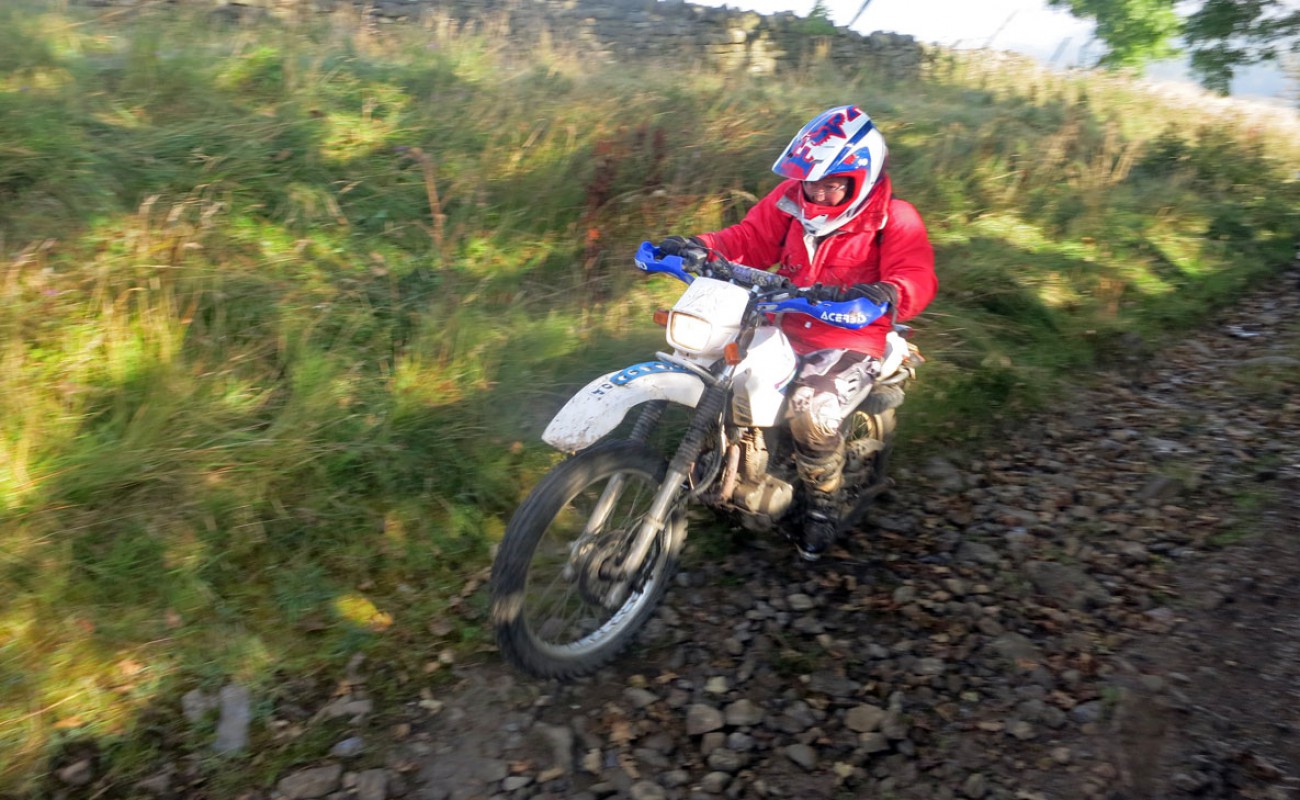 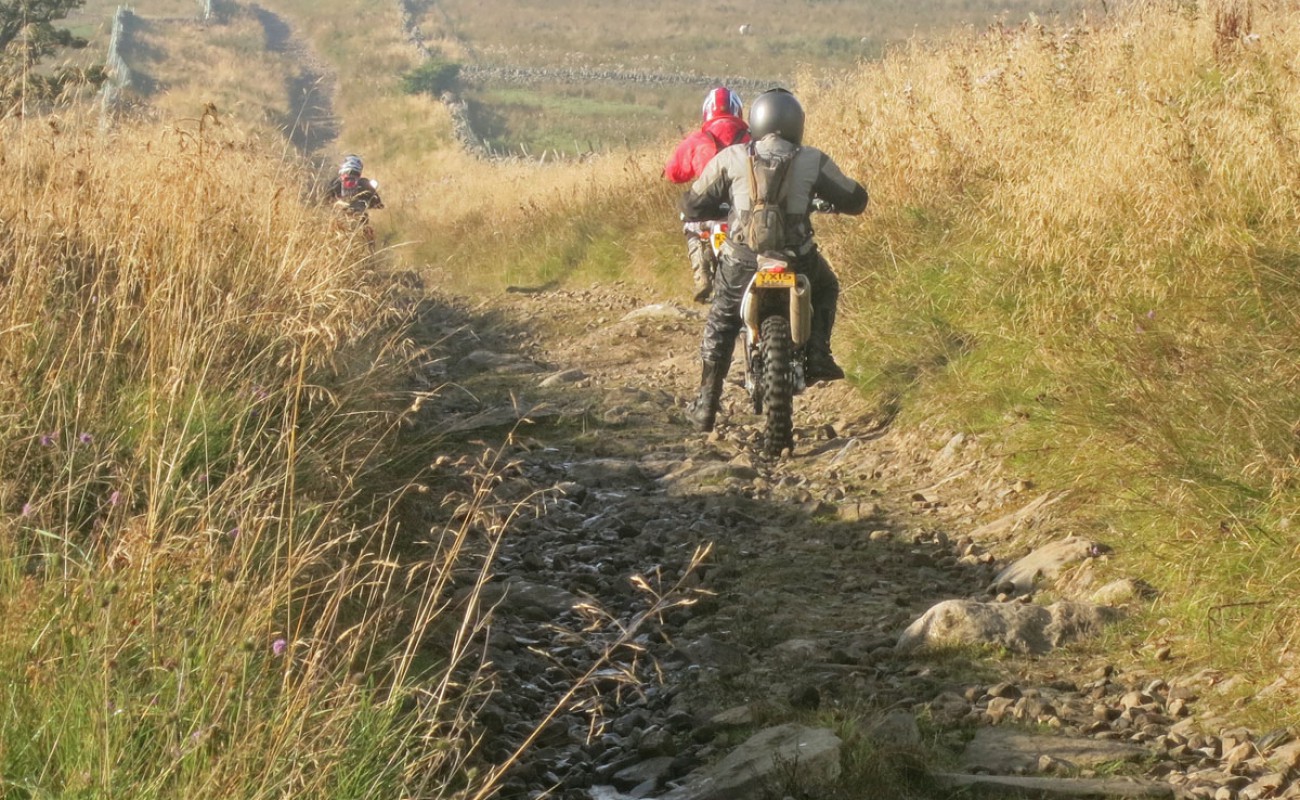 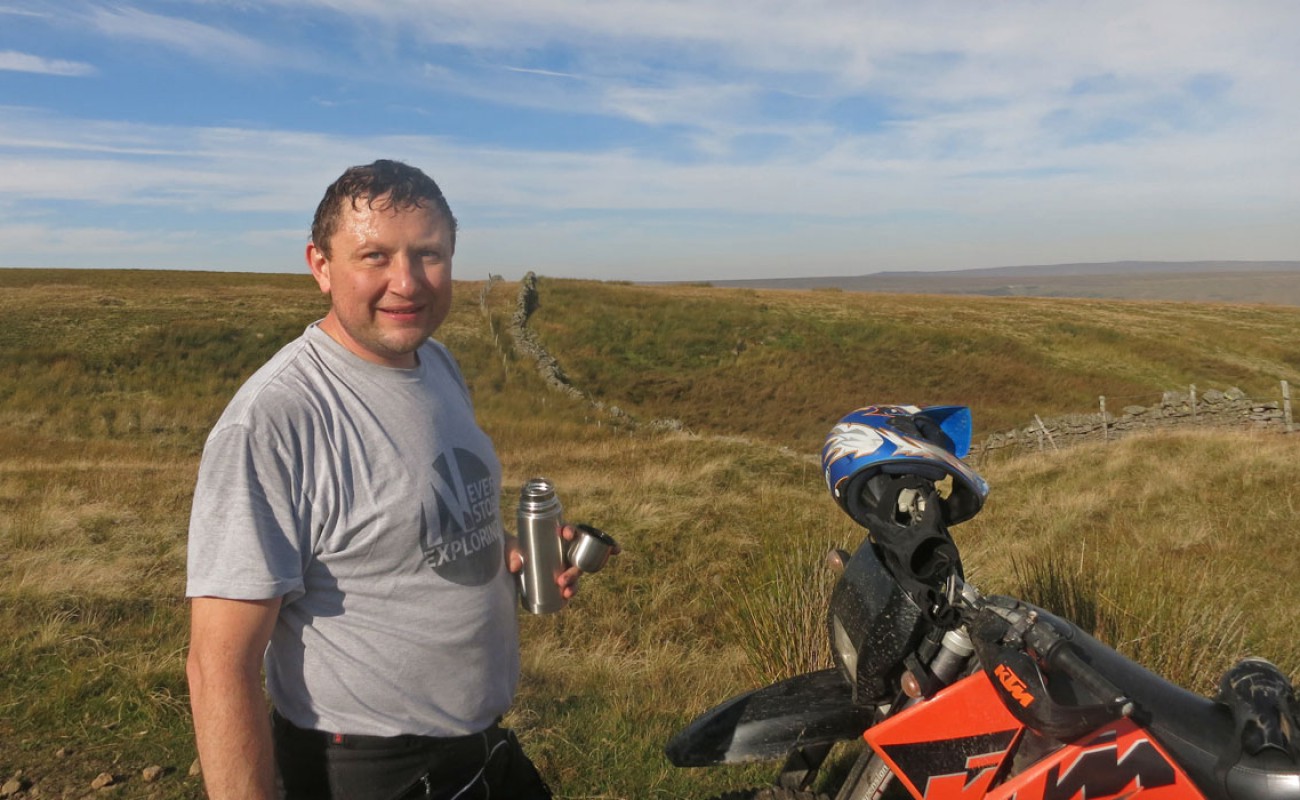 The Roman fog had descended during the night and all hope of enjoying spectacular views of Northumberland went out of the window. Or tent flap depending on your commitment to the 'camping' part of the weekend. It would have been no surprise if a legion of Hadrian's finest came marching into camp, though we probably wouldn't have seen them.

Faced with sixty expectant riders the Northumbria TRF run leaders saddled up and headed out with their eager groups, one by one disappearing into the mist, the drone of four strokes being swallowed as they went. As I had done most of the organising my group was last to leave. Colin, Lek, Tim, Graham, Alison, Dino and Lucian had all signed up to the easy going group that I was happy to lead.

Northumbria has a fantastic mix of lanes, from hard and rocky, to muddy, to sandy forest tracks. You can even ride a small section of beach, though we weren't destined to make it that far today. For the first hour or so the only view we had was the surface below our wheels, but as we made our way towards Alston, the fog began to lift. Or technically speaking, the fog stayed where it was, it was us that was lifting. Before long the views that I had hoped to enjoy revealed themselves and our group enjoyed Limestone Brae and Long Cross two rocky testing lames, in sweltering sunshine. Layers were removed, and frozen faces gave way to rosy smiles. This was more like it.

Under normal circumstances, Alston is our half way point for fuel and food, however this weekend the campsite we all started from is situated only 2 hours away as the trail bike rides. We swept through the popular biker pit stop and made our way towards one of the finest lanes in the region, Tyne Head. A long trail that starts near Garragil and makes its way parallel to one of the tributaries that feeds the famous river. The entrance to a small mine still remains near an old miners hut at the top, the lane originally used by men and horses transporting the fruits of their toil out and down the steep track.

Today it was to be frequented by our group of riders who were starting to question the 'easy' bit of the 'easy going' ride they had signed up to. Fortunately summer had dried the boggier sections out and before I knew it I was at the back putting my camera away with the main group making good progress.

"Right guys, this is Tyne Head. As the name suggests, it's one of the points at which the River Tyne starts. It's a great lane but there's a point at which it is really obvious which way not to fall. Whatever you do, don't fall to the right…"

As I rounded the corner to catch my group up, the solo bike lying on it's side told an ominous story. Someone had fallen to the right. 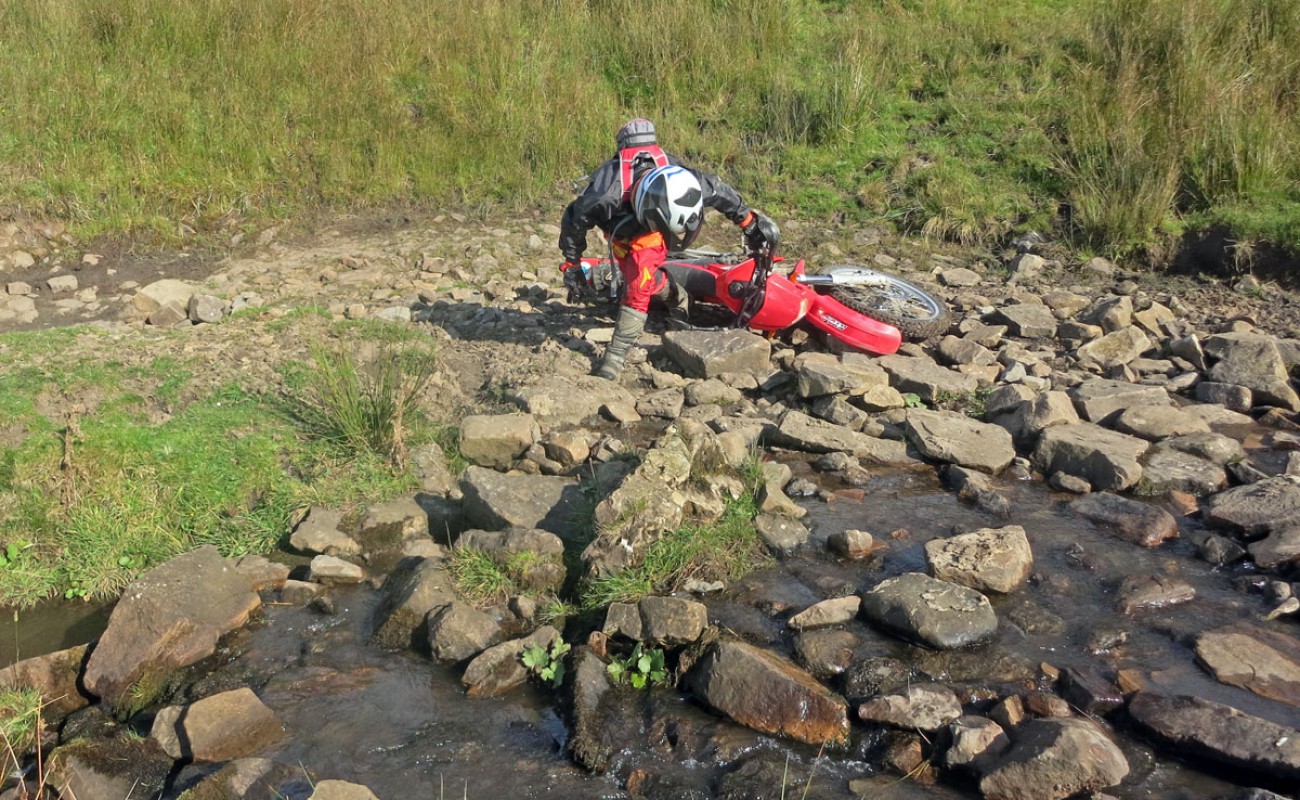 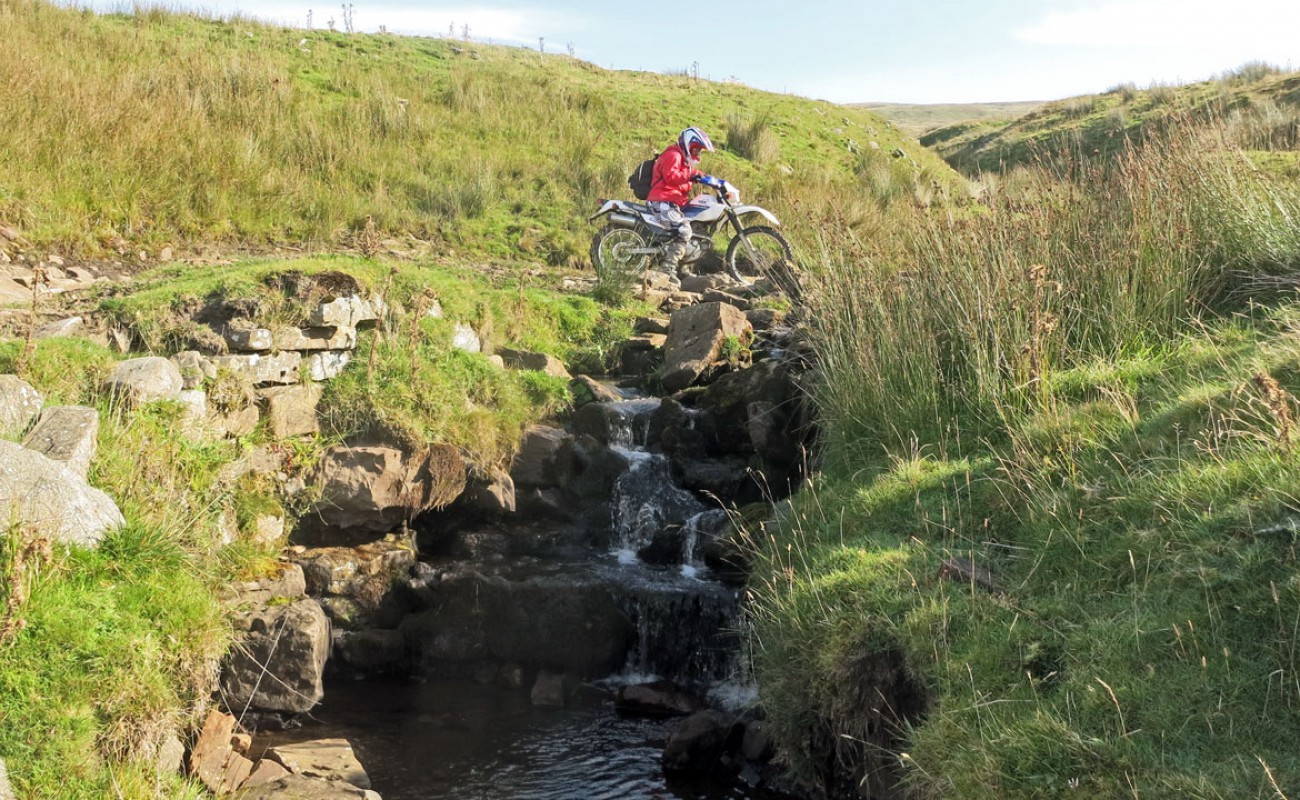 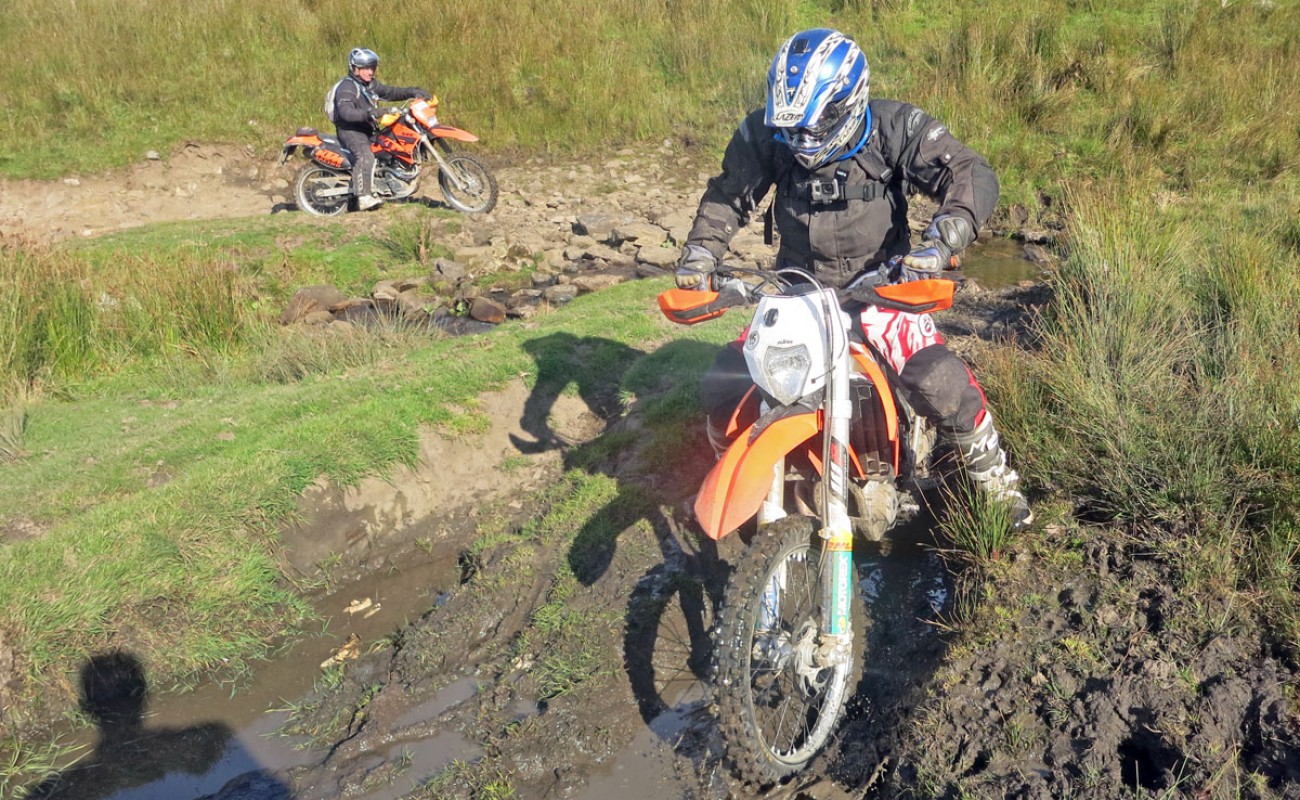 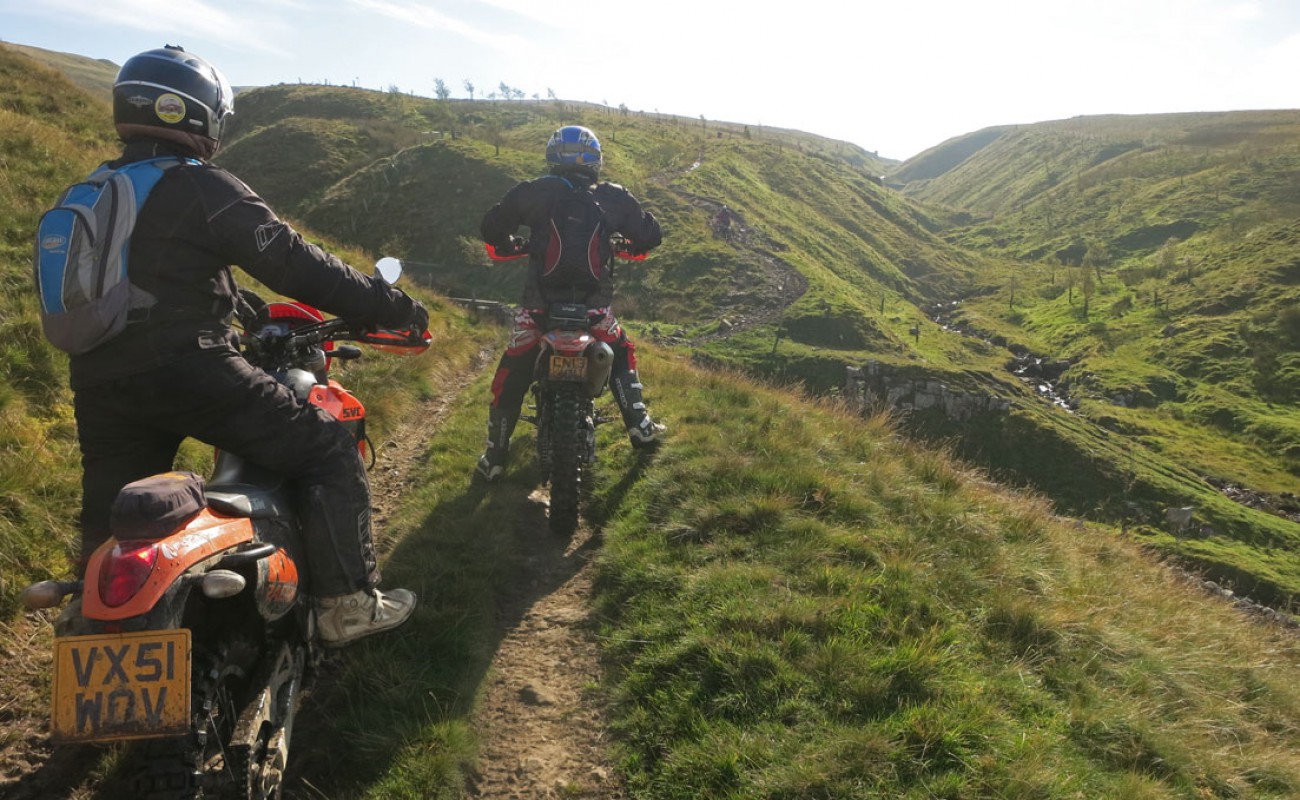 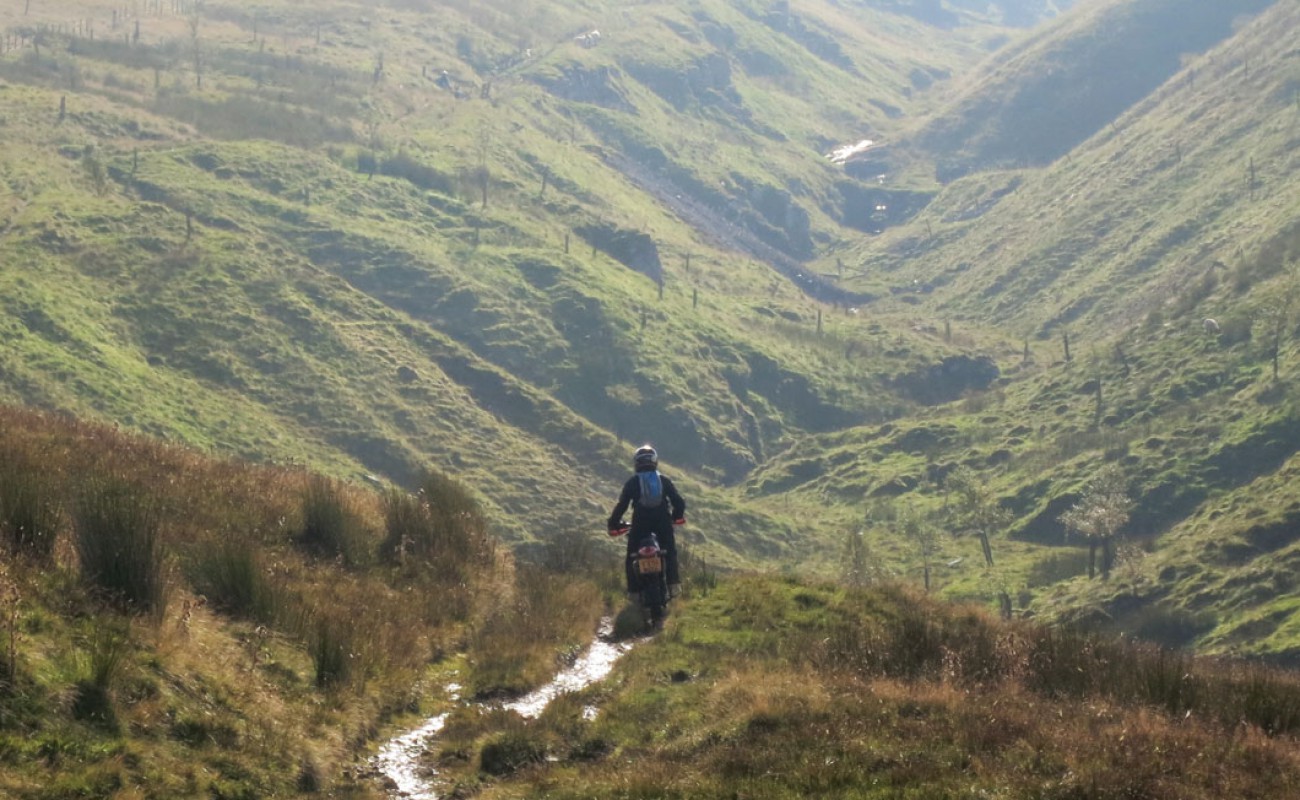 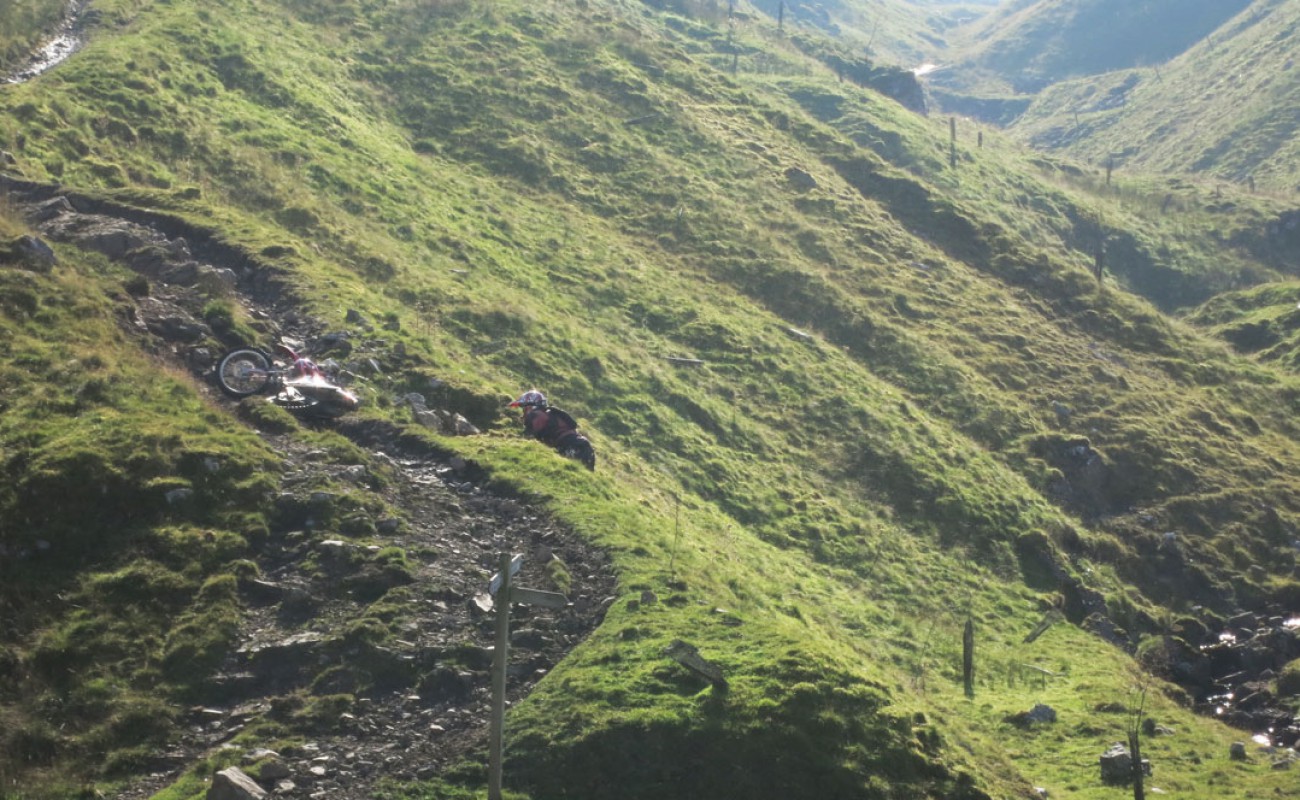 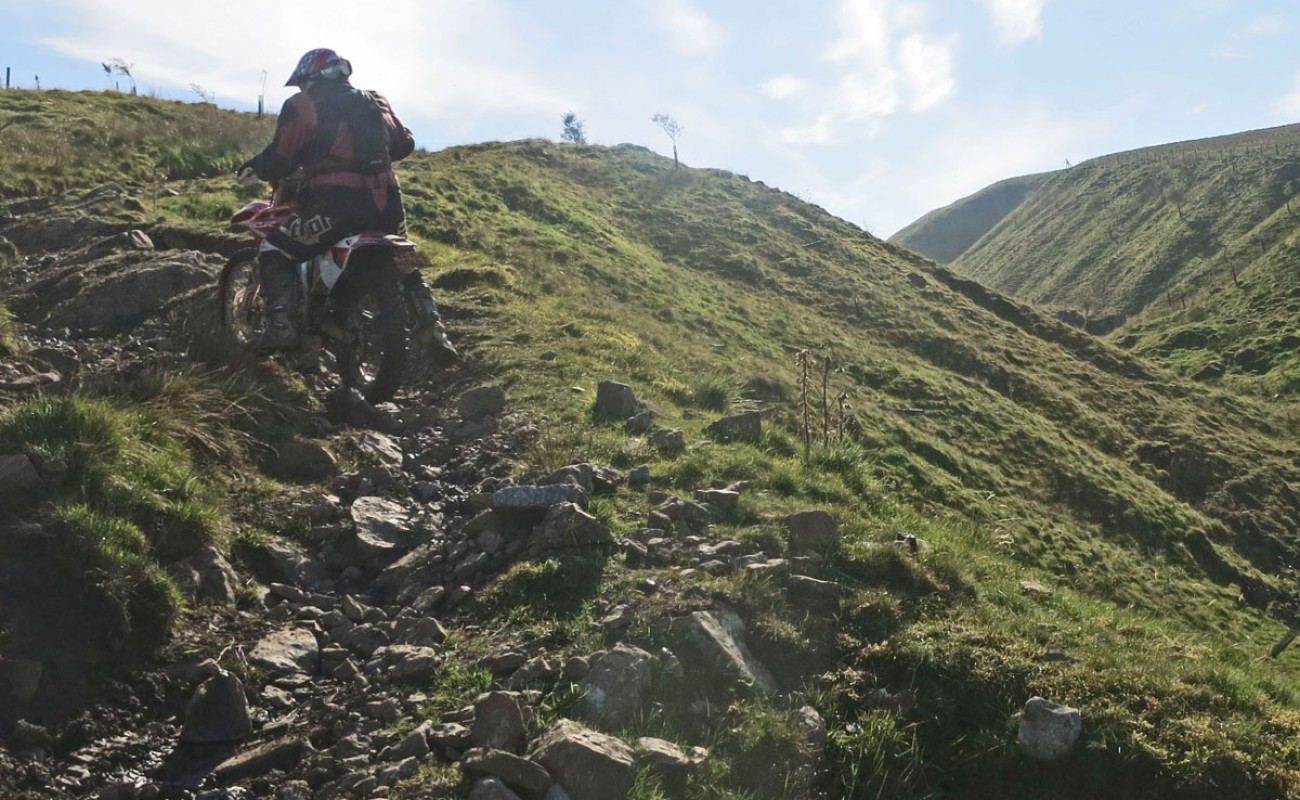 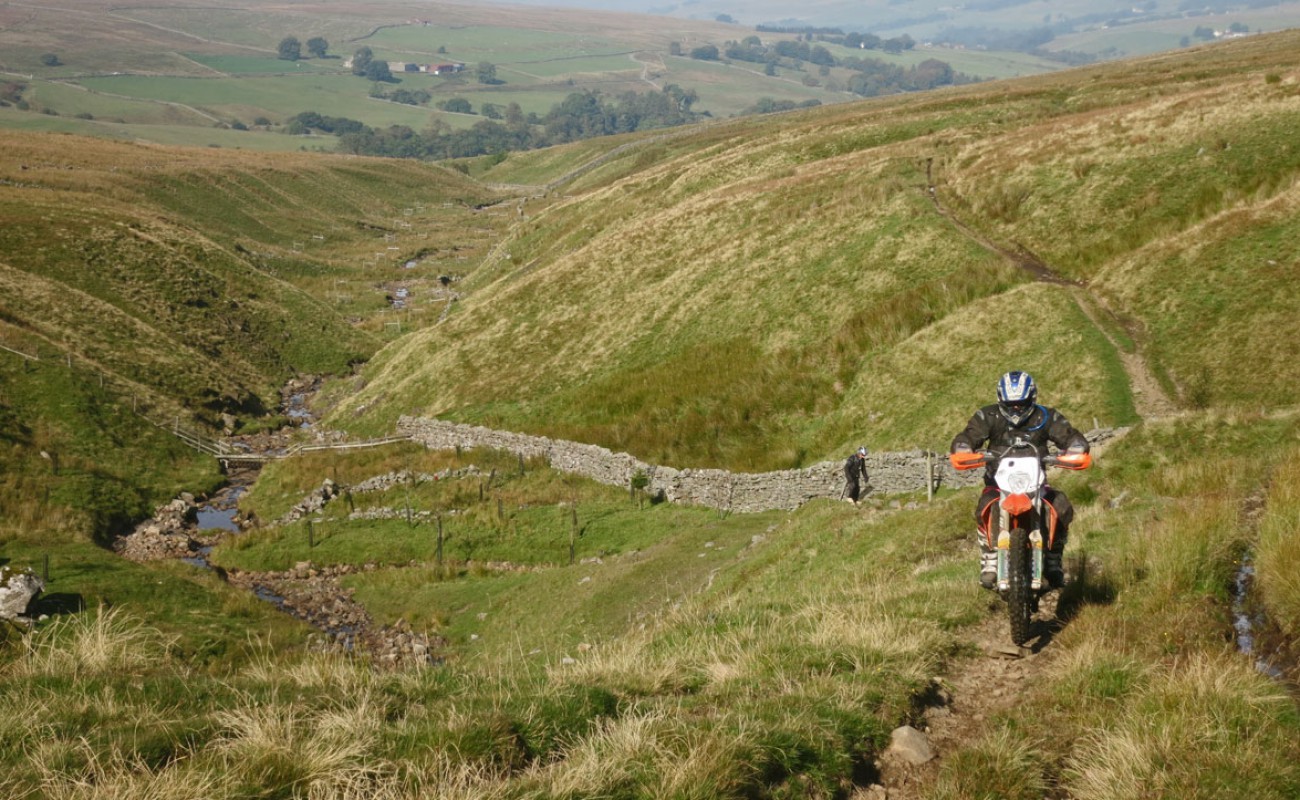 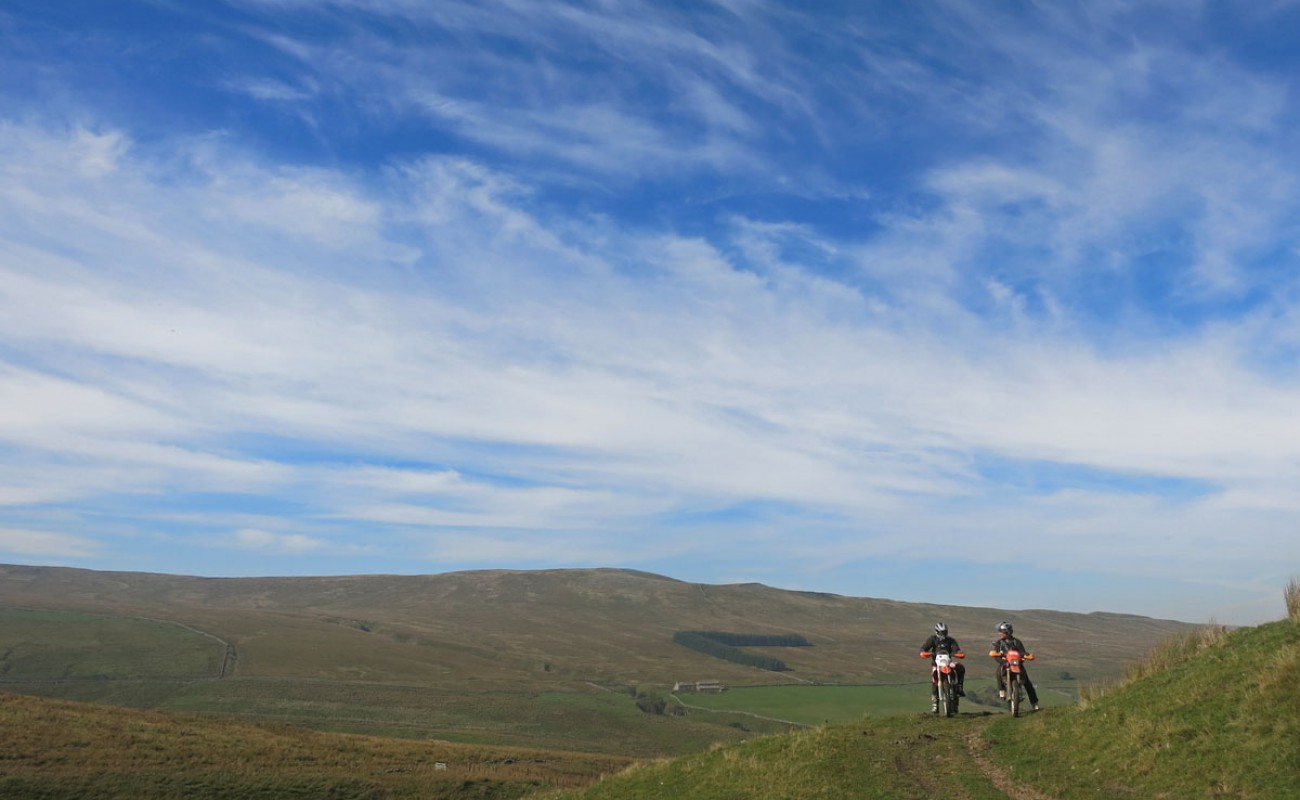 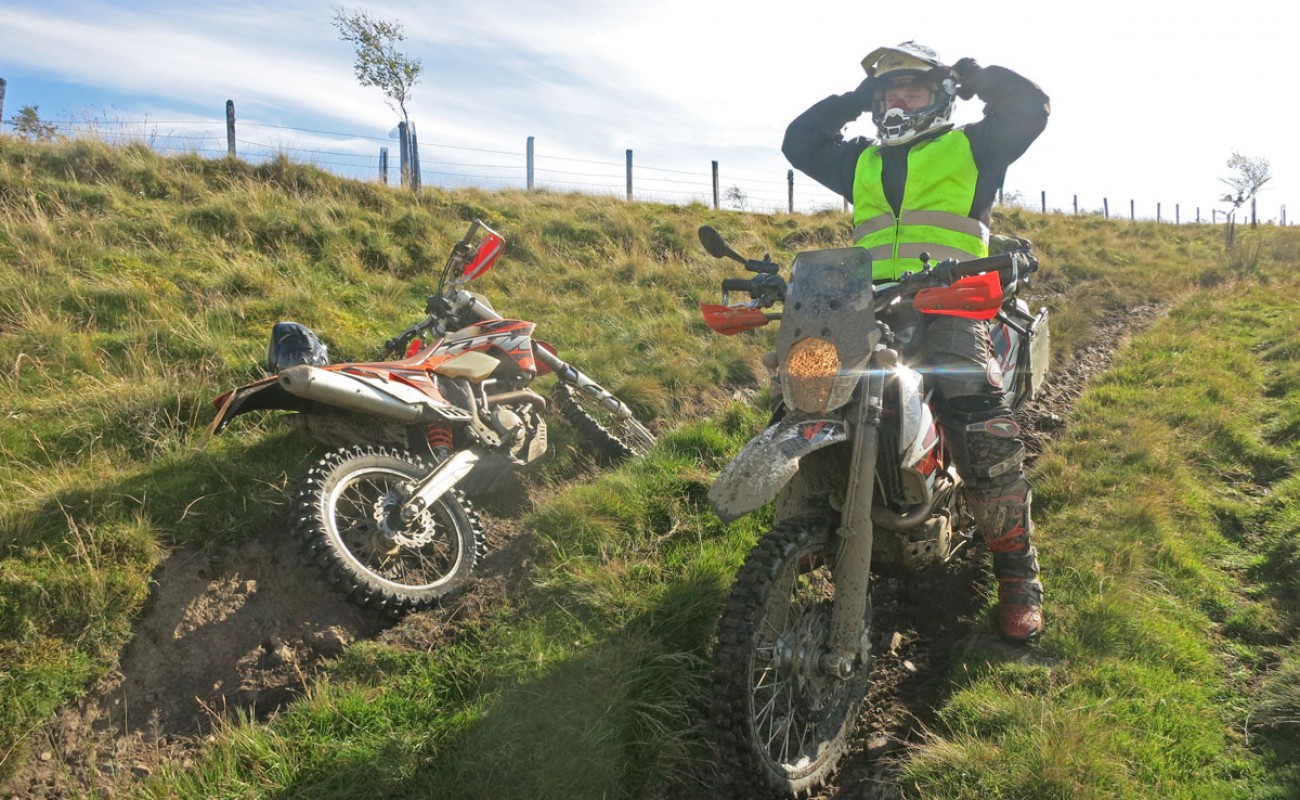 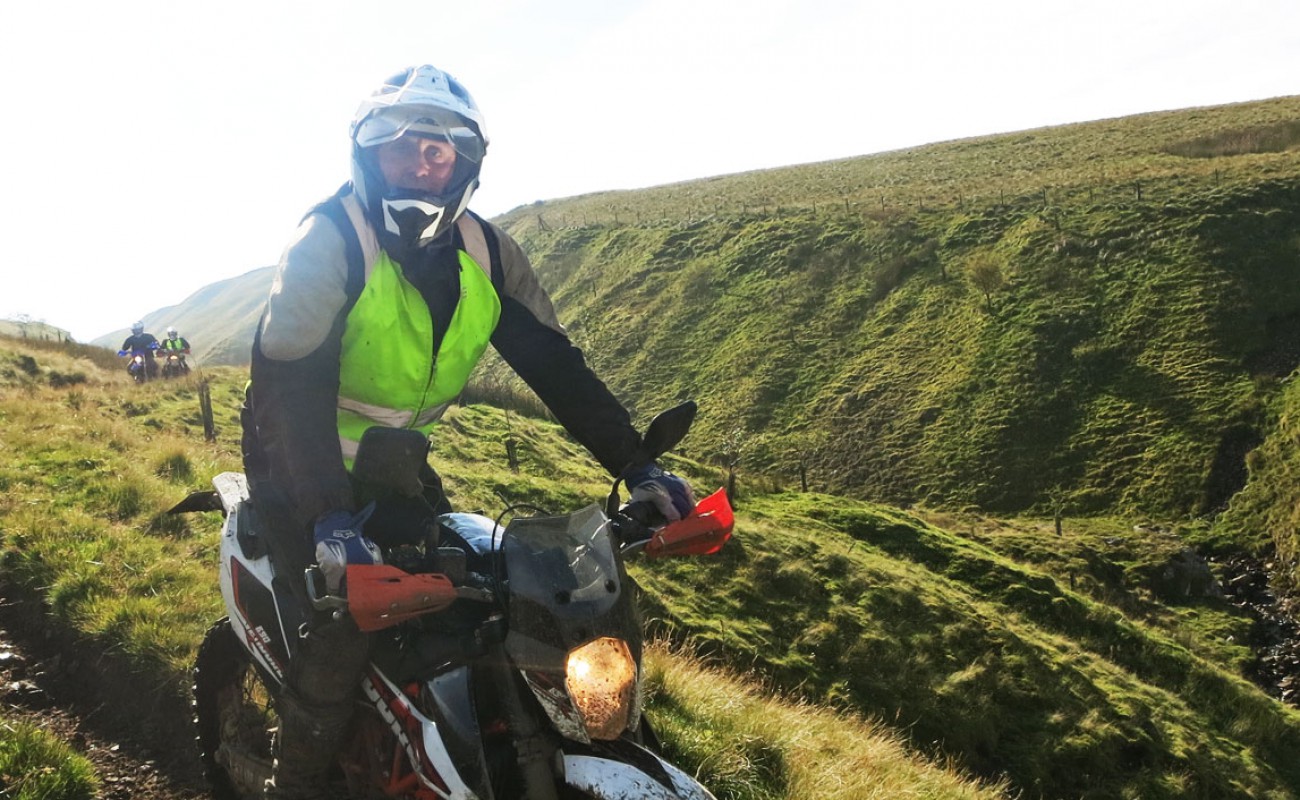 The only instruction I had given to all the run leaders before we left that morning was to make sure they brought everyone back in one piece. I admit at this point I was a little on edge until Dino's head popped above a rock and he started to make his way back up the hill towards his bike. Frowns broke into smiles as thumbs up were given and received.

Tyne Head conquered we rose up over Coldberry End, the highest green road in England and descended into St John's Chapel for a well earned pub lunch. Other groups would be grabbing 3 minutes to stuff down a service station sandwich keen to pack as many lanes in as possible. My group realised that our sit down pork burgers and chips was the 'easy' bit of 'easy going'.

Bellies full and energy levels recharged it was time for 'The H'. A fantastic lane in Weardale, so named because it is laid out in the shape of said 'H', with two tracks joined in the middle by a fiendishly difficult lane the drops and rises into and out of a small valley. Water erosion has cut a deep channel into one side that makes the descent interesting and the ascent a real pig. Our route had us pointing down the eroded track. I took the long way round and made sure we went up it.

Riding the H is akin to a trials section really, but it's rare that anyone has the foresight to bring a trials bike. The guys got stuck in pushed, pulled, sweated and swore their way up and out of the gully. It was the highlight of the day seeing the look of apprehension at the bottom be replaced by proud smiles at the top.

"Make sure you tell everyone you did the H today, and that you went UP and not down it." Well done boys and girls. 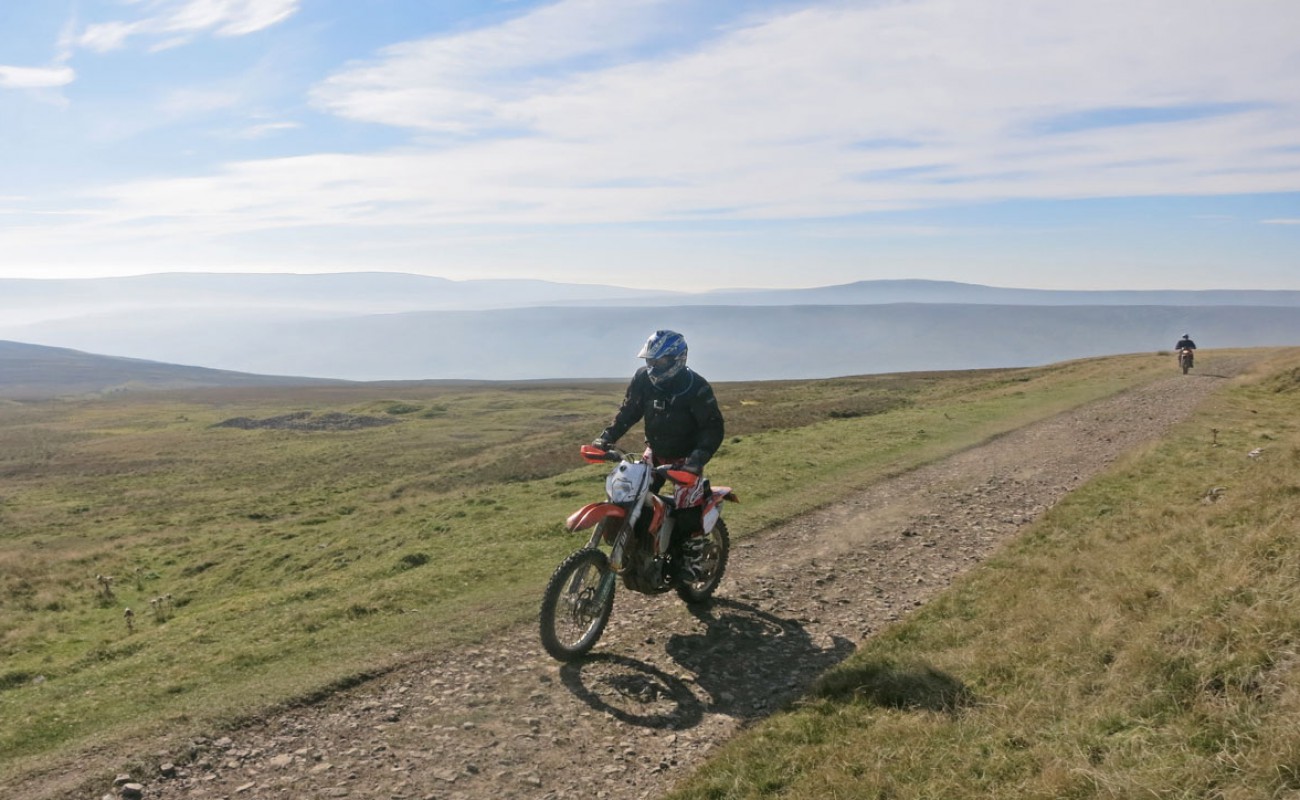 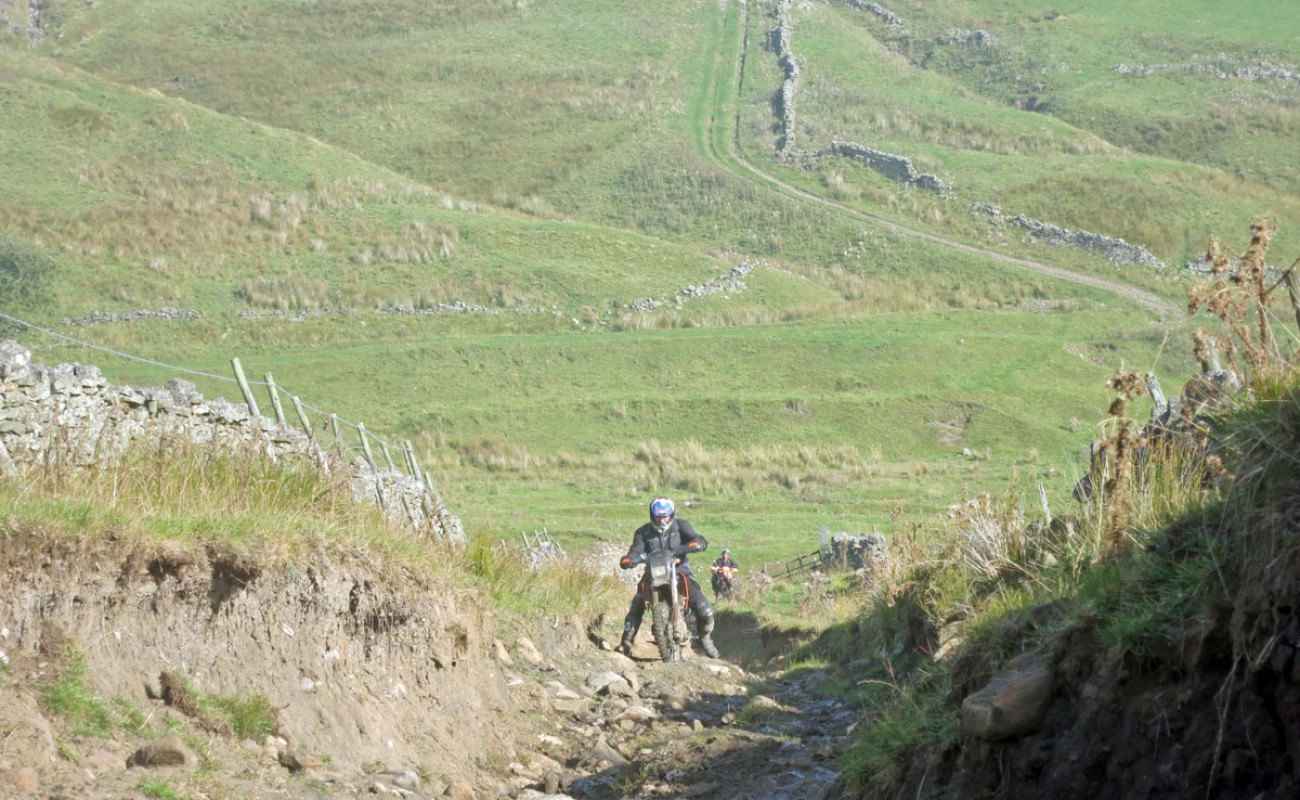 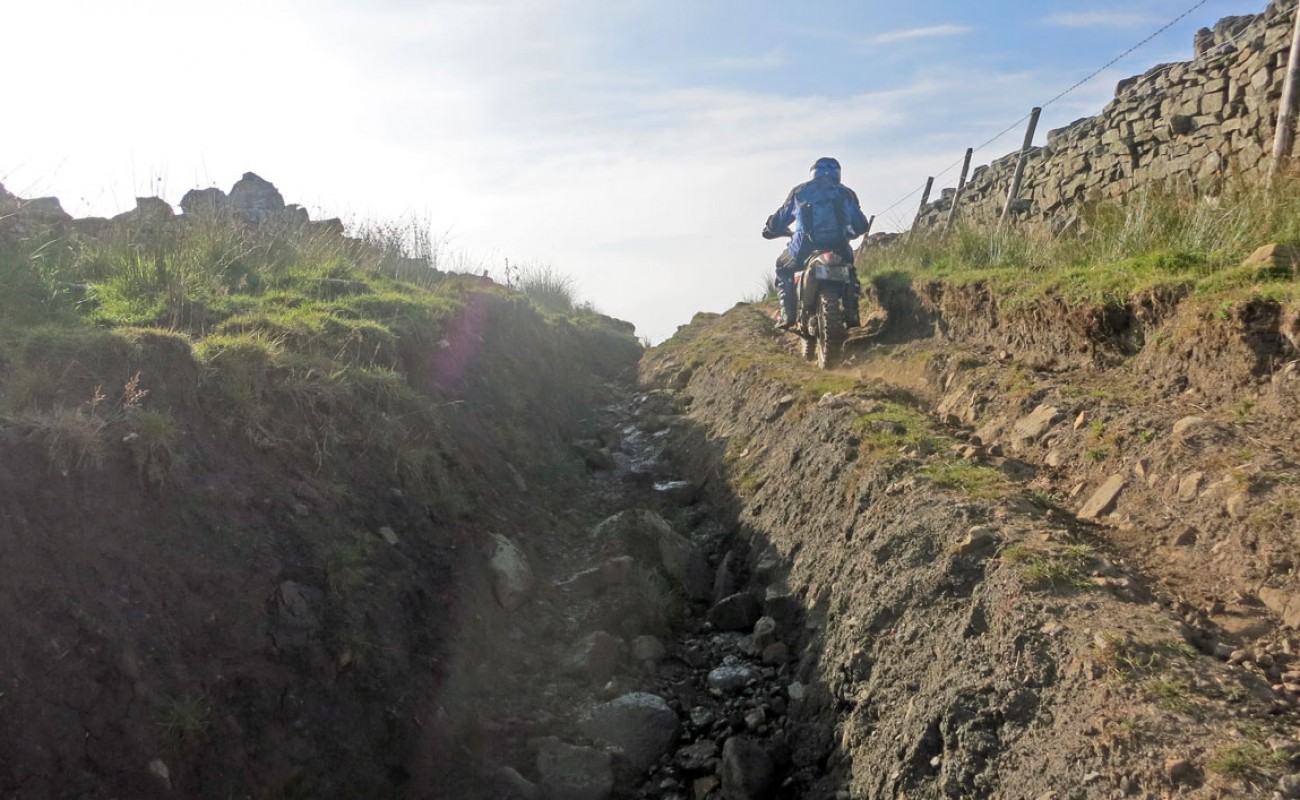 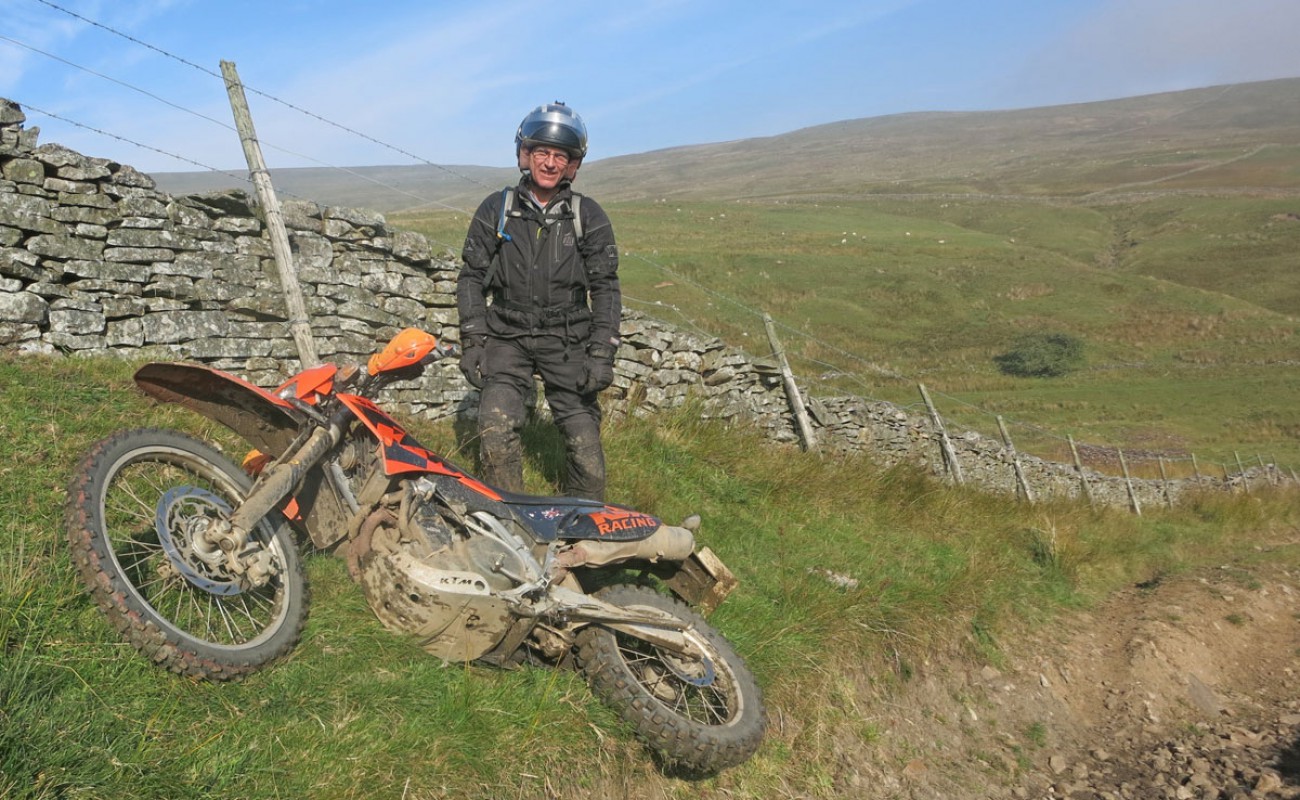 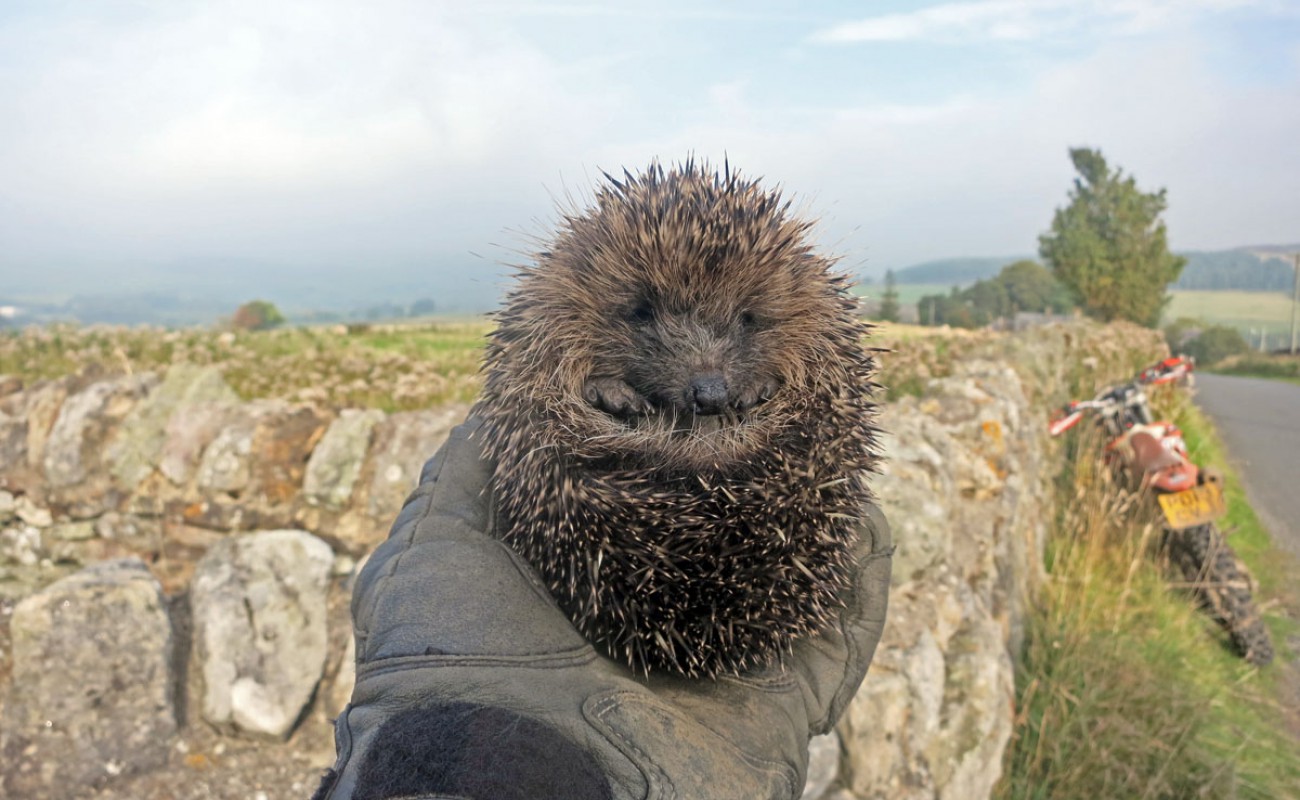 The rest of the afternoon's ride took us away from the moorland and valleys of Cumbria and Teesdale, back into Northumberland and towards Hexham through Slayley Forest, a popular network of green roads that cut through forestry commission land. It was tempting to cram in more, but with another days riding ahead we decided to end on a high and having had not a single mechanical or puncture, not push our luck.

After all, there were hot tubs and beers to be enjoyed back at the campsite.

Northumbria TRF's  Hadrian Adventure Weekend is set to become a regular feature on the TRF trail riding calendar. To find out more information or to get booked on next years event contact Greg Villalobos.