The Happiest Valley in Wales

With a name like Happy Valley you would hope that two days riding would be just what you need to shake off those work week blues. This summer 21 intrepid TRF riders set off to test the theory.

Split into three groups, the riders headed for the Welsh coast in search of joy. Manchester TRF member Hugh Cleary braved a bout of man flu to catch the action. "Thanks to all, especially Alan for organising what was for me one of the best trail riding weekends ever! We had a great group with a good bunch of lads so cheers to our ride leader Roger (and Adam for the last few trails) for two days of amazing trails. The scenery was breathtaking and the weather excellent. As for the infamous "road of bones".....what a killer. Great to be a part of the TRF…"  Paul


"Thanks Alan for a cracking weekend. You are like a human sat nave! Weather couldn't have been better. Fantastic scenery. Met some great people enjoying the same banter. Bit sore this morning and a few aching bones. Thanks Pete for helping sort my bike after my come off." Archie

"Thanks to everyone, especially Hugh for swapping bikes and my husband and everyone else for their patience and humour." Debs


"What a great weekend! it's all been said already but you can't beat fantastic weather, fabulous views and endless number of challenging lanes to ride with great friends. Big thanks to Alan, Roger, and all the lads for the best days out on the bike so far." Simon

"Big thanks to Hugh for the lift there, Mark for the lift back, Alan for the organisation and all the rest of you who helped me have the best trail riding weekend of my life! What a wonderful bunch of humans you all are!" Jay


"Wales just keeps giving, see you on the next one!" Roger


Whilst getting into my car immediately before setting off on Friday I noticed a screw in a rear tyre so had to take the car to a tyre repair centre - they found three screws in the one tyre! Well this put me back a couple of hours and I needed to get to Chester to pick up a tent that I had ordered. Anyway my downer on luck was good for somebody else as Jay phoned to see if I had set off, anyway went to pick him up and off we eventually set off. Got to Chester in good time to pick up the tent and from there on to Dolgellau. On the twisty road we were passed by a Jaguar XK "R"; Mercedes AMG and a Porsche, we caught them up about two miles further on, tortoise and hare!

I set up camp, went for supplies and sat around a bonfire with Andy, Mark, Paul, Gary and Jay listening to daring tails of do or die and how to cut one's arm off with Andy's blunt knife without spilling any blood or pain.

Unfortunately my occasional sneeze was getting worse with my head blocked and throat feeling like it was full of barbed wire. The wine helped smooth it a little but I could not get to sleep for more than about 20 minutes at a time, popping paracetamol and Lemsip until 5:30 in the morning when I could hardly breath I took myself off to the facilities and had a hot shower, and was finally able to breath again.

Up we got for breakfast, which was really good value in my opinion, but my voice sounded like Mariella Frostrup on speed. 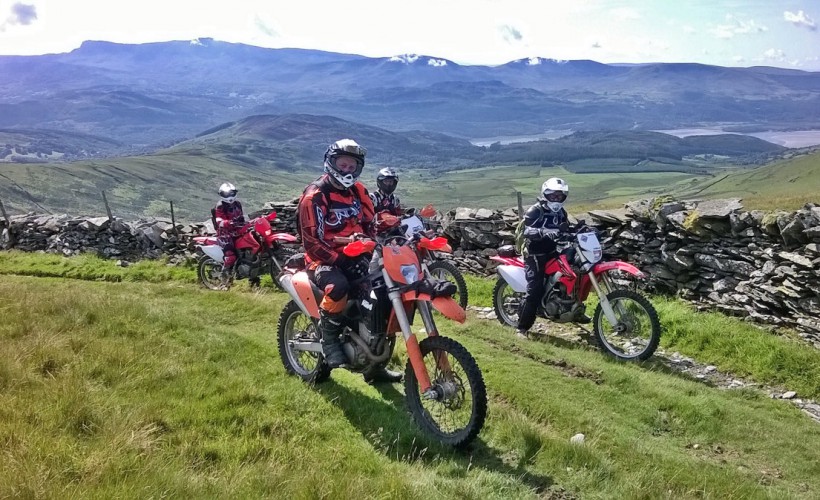 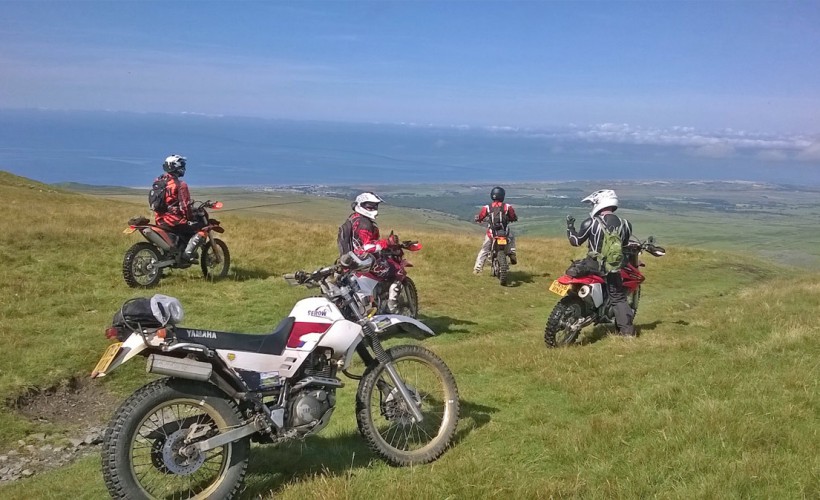 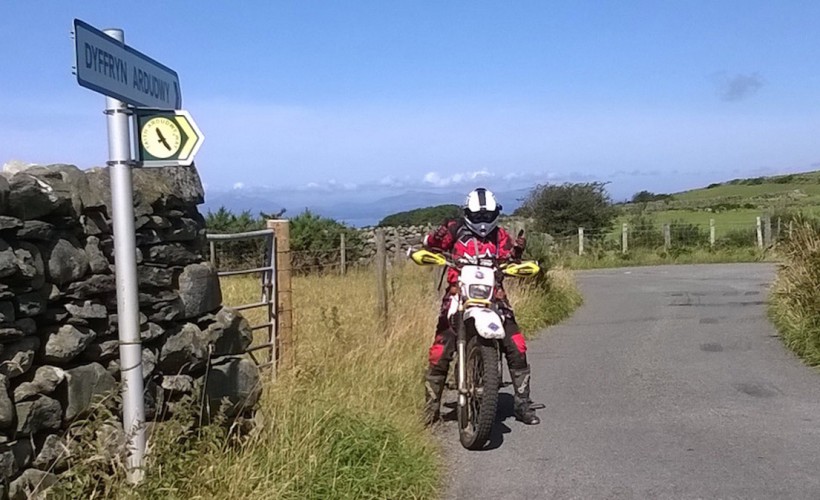 Ok, so Group three assembled themselves; Debs, Gerrard, Paul, Mike, Steve, myself and our leader Mark H. Brilliantly led by Mark we set of for our first lane, do n't ask me where as I have no idea other than it was North of and overlooked Barmouth Estuary with brilliant views. I stayed at the back (as usual) but the air quality was getting worse as Mike's KTM seemed to have been overfilled with engine oil and was sending plumes of white smoke the likes of which have not been seen from the Graf Spee. His bike became harder and harder to start so Mike eventually had enough and he and Steve went back down the hillside. That left five of us to continue, entertained by all forms of expert gymnastics from Debs showing how to disembark a moving motorcycle and roll down hillsides, singing words like "the hills are alive..." at least I think that was what she said as my ears were blocked and my nose running like a Consulate advert from the 60s

Eventually Deb's bike had a temper tantrum and would not start on the electric welly so we swopped bikes, I was slightly better at bump starting with help from Gerard and Mark pushing, not easy on wet grass.

The rest of the lane was great riding on the large flat stones separated by three foot deep bog on either side, over a rock bridge with an eighty foot drop to each side (well five anyway), and eventually down to a Spar for elevenses. Plenty of liquids for me plus another upload of Lemsip and paracetamol.

Debs so wanted to make us lunch on the way that she had the night before been out and even placed a microwave in a farmer's wall.

After our brew we then set off up a narrow rocky lane when Deb's bike decided it had had enough of me and threw off its drive chain. Well we managed to remove the lock ring and prize the front sprocket off to release the trapped chain from the swing arm. Now I was pointing uphill and the others had returned to listen to my guttural germanic sounding words of persuasion to the chain. Job done I set off up the hill whilst the others went back down to turn around until the Serow decided to pin Debs down between a rock and a hard place. It was decided that enough was enough so we headed back down the outside of a four mile traffic jam out of Barmouth to base. 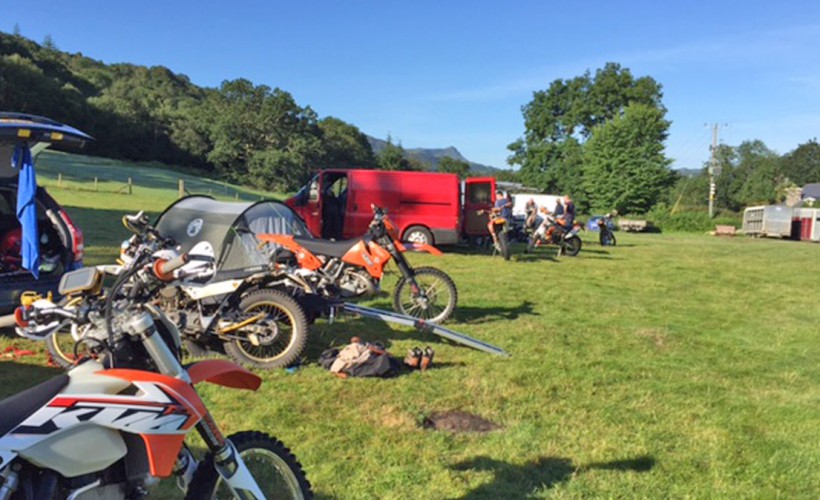 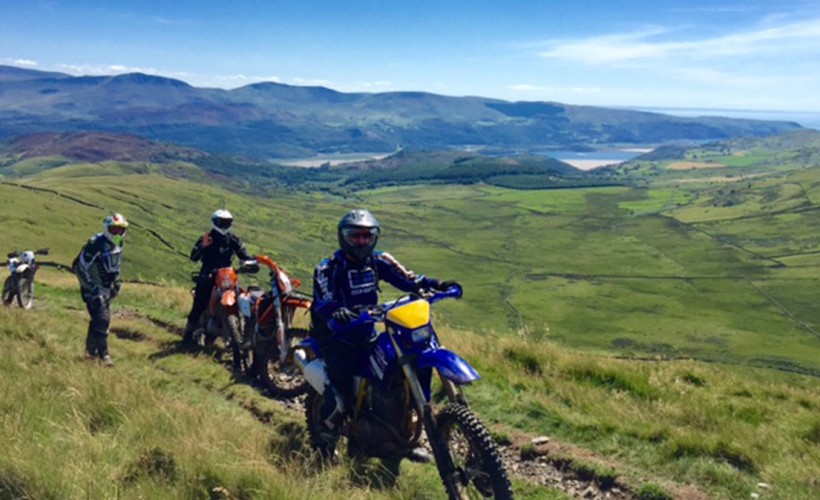 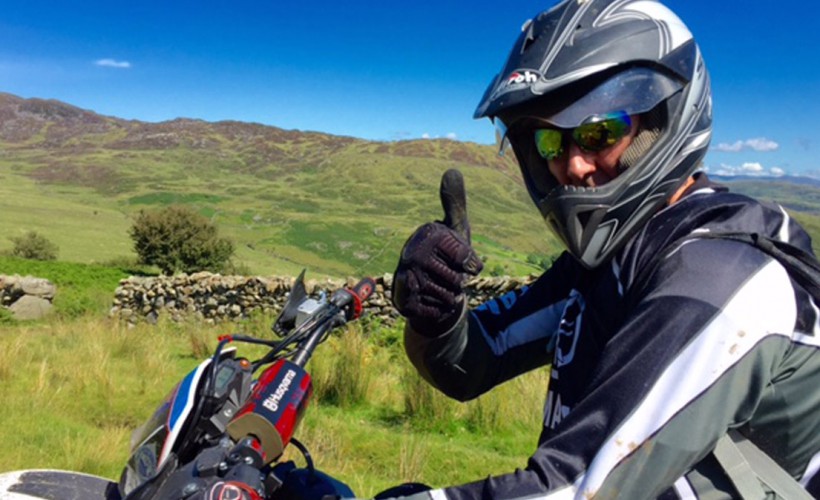 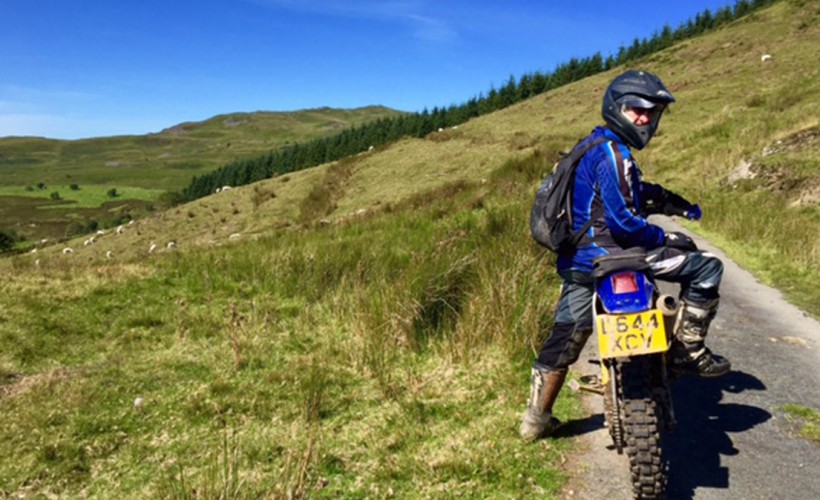 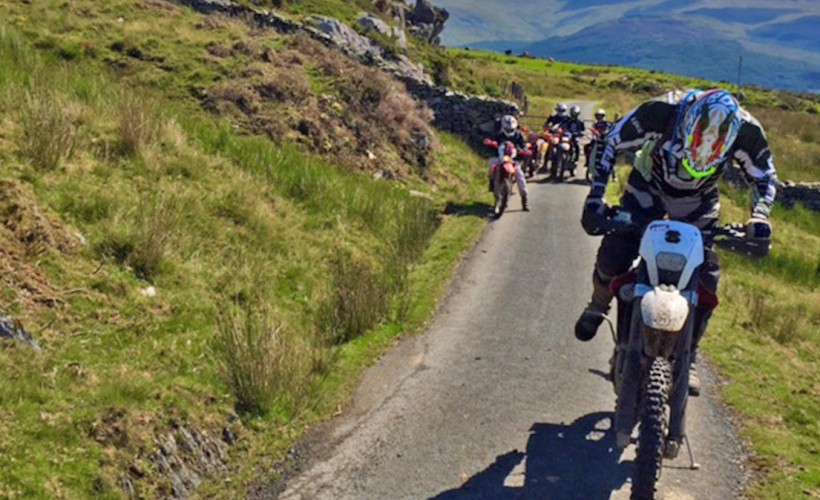 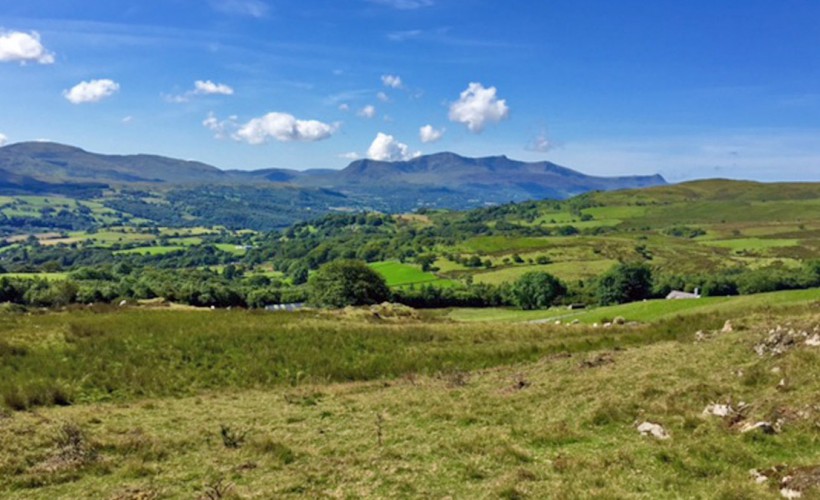 With Deb's Honda not really in a fit state for more trail riding they set off home. I was completely shot from the effects of the heat, smoke and 'man flu' that I was drained of all energy. Mark decided that as there were only three of us left and I was considering calling it quits too he left to take his lads out. Paul went off for a little ride of his own and I stayed at camp. When all the others returned, and Paul, another Mark kindly offered to take Jay home which meant that I could go home as well, rather disappointed and peering through a windscreen covered in sneeze residue I got home just in time to buy another box of tissues and Lemsips.

We really did have a great time on our little group ride, the weather was kind and the views excellent but it does show how quickly things can deteriorate if simple pre-ride maintenance is not up to scratch.

Thank you to all for great banter, Mark for leading, Alan for organising and Debs for the acrobatic show especially the double pike followed by back flip over the top of the hillside (what sympathy, nobody handed me a clean handkerchief).

Have you joined the TRF Facebook Group or Forum? They are great places to find out about rides all over the country throughout the year.