The calm before the storm

How do you conserve a Green Road? We all have our favourite bike brand, and once you're hooked nothing else will do. Long time trail rider, but new Cumbria TRF member, Noel Thom has been a Honda disciple for as long as he can remember, however has never been tempted by modern Enduro machines. Until now.

We caught up with him as he took his new(ish) Honda CRF250X out for a spin in the Lake District. The only problem was, no one told him storm Desmond was on it's way...

As with most Hondas I've acquired in the past, I wasn't even aware of the CRF250X model until the day before I bought it. Being of a certain age and state of mind my off road bikes have previously all had air cooled engines and steel frames. However it had suddenly occurred to me that I'd never owned a contemporary dirt bike. It turns out Honda have been making this particular contemporary dirt bike since 2004 but, for me at least, it's a huge leap forward. Three weeks after taking delivery of it and having still not really ridden the thing I managed to talk Greg into coming down for a tour of the Lake District's limited trails. Week days in winter are the perfect time to take advantage of Cumbria's off road network. Zero pedestrian traffic is almost guaranteed although this does of course mean that you will have to open all your own gates and what we lack in open byways we more than make up for in the number of closed gates.

Honda ownership is crucial in these situations. Neutral needs to be found quickly and efficiently and this, coupled with a usable side stand helps to relieve the inconvenience, two things not all manufacturers pay enough attention to. Both come fitted as standard on all Honda motorcycles. Noel's Honda engages neutral for the gate. Greg's KTM has a little lie down.

Having tackled the lanes east of Windemere we turned our engines off and sat waiting for the ferry west. I was already feeling very happy with the CRF. It's obviously a tamed motocross bike that's been tuned for more low end torque along with gear ratios more suited to the trail than track. The CRF also comes fitted with 450cc's but it's hard to imagine a situation where the extra quantity would be necessary on the UK's Green Roads. At Grizedale forest I accidentally rode past the track I've been using for thirty years. Recent timber harvesting had completely changed the appearance of the landscape making the entrance to the track unrecognisable. From there it was onto Coniston for lunch at The Meadowdore. This is one of the last proper cafes in existence and a must for any motorcyclist seeking delicious sustenance with a log fire and plenty of room for drying clothes. 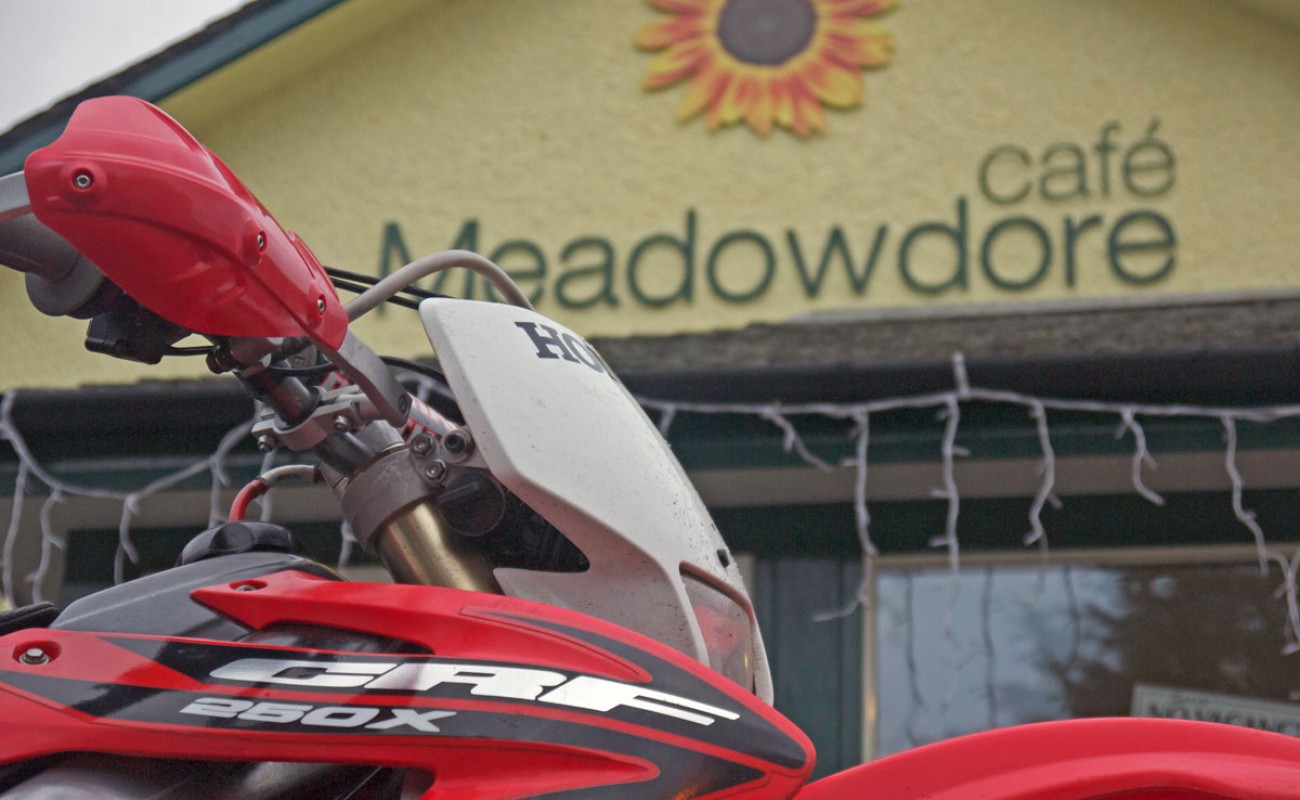 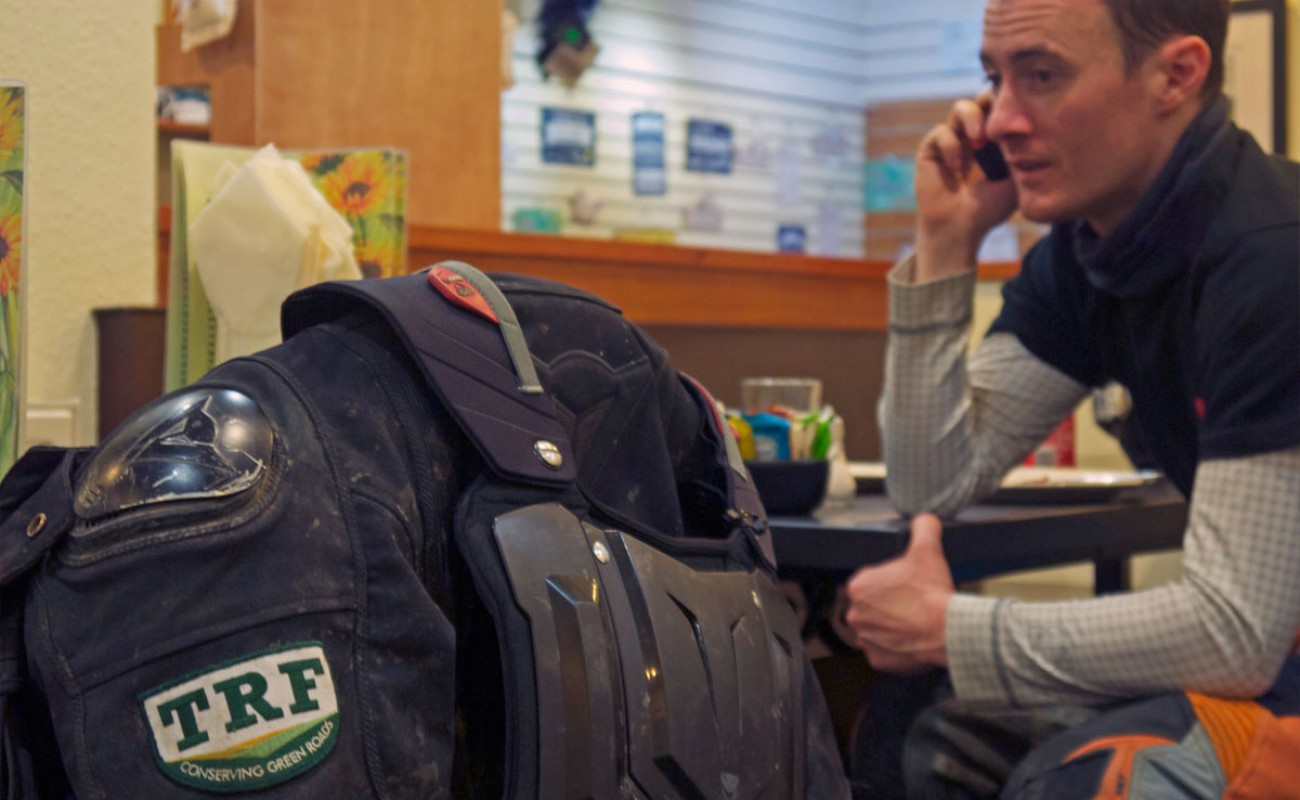 What do you mean you didn't think it was very deep...?!

Having studied the weather forecast this ride was taking place a day early and on the eve of, what turned out to be called, Storm Desmond.

Our first clue to the impending devastation came when Greg's mobile phone finally picked up some signal just as our chips arrived. His mother had been stranded inside her flood damaged BMW for four hours outside Cockermouth the previous evening. Rescue had at last arrived just before midnight and the car was a write off. This rather disconcerting news was bad enough, little did we know what was yet to come. Tilberthwaite to Little Langdale is perhaps one of the most scenic routes in the Lake District so it was no great surprise to find ourselves in a queue behind three orange 4x4 vehicles at the beginning of the trail. These vehicles belong to the area's only commercial off road tour company. 48 hours later this company was to make national headlines for all the wrong reasons after helping wedding guests make it through the impending floods for what some saw as extortionate fees. Regardless of the fees they certainly missed a huge PR opportunity some would say they were in desperate need of. As we reached Little Langdale we parked the bikes up at the entrance to the abandoned slate quarries. We climbed a stile and took a short walk up to the entrance of a tunnel which led us into what is known as Cathedral Cave. This large 40 feet high cavern is lit by two openings leading off to other workings and a huge column of slate has been left in the centre to help support the roof. As trail riders it's very easy to ride past such points of interest, getting caught up in a 'covering as much ground as is humanly possible' mentality. Riding in a group, even of two, often means the lead rider feels under pressure to keep moving and those behind, to keep up. 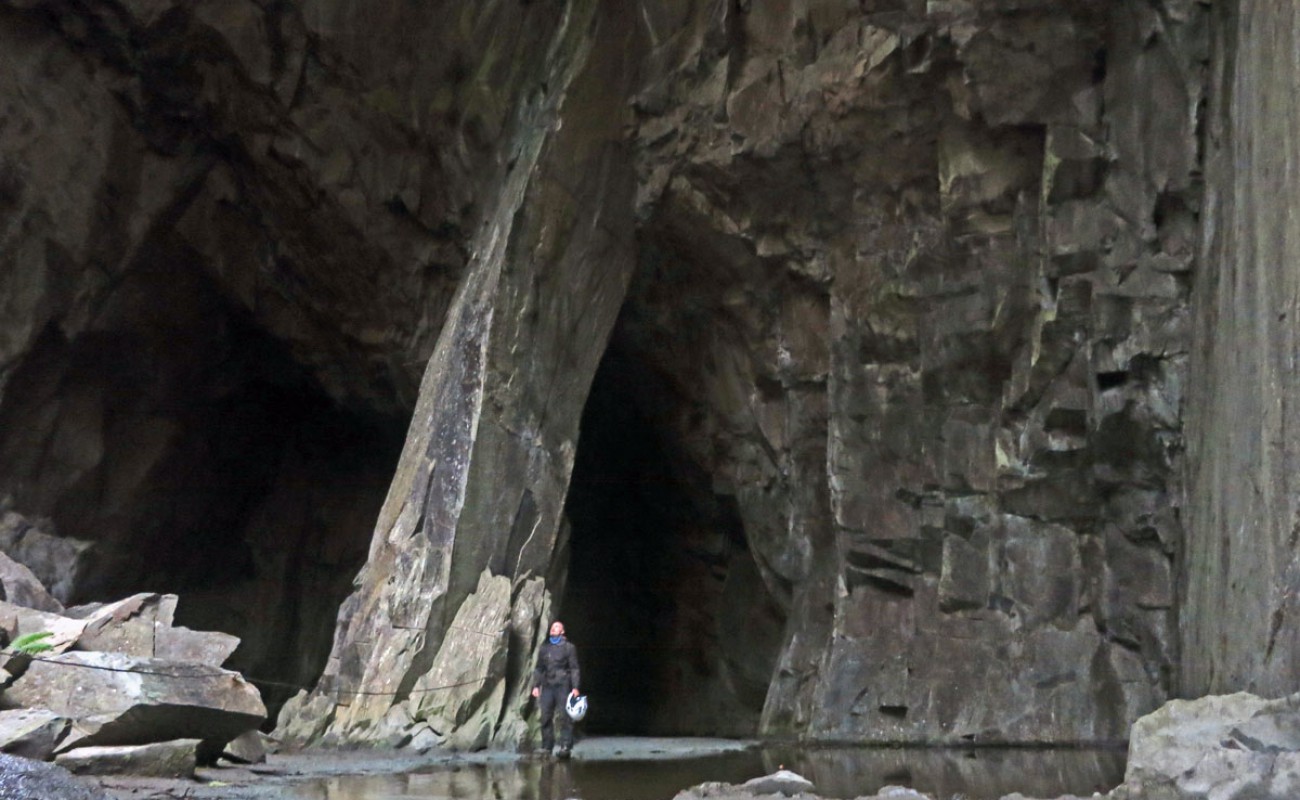 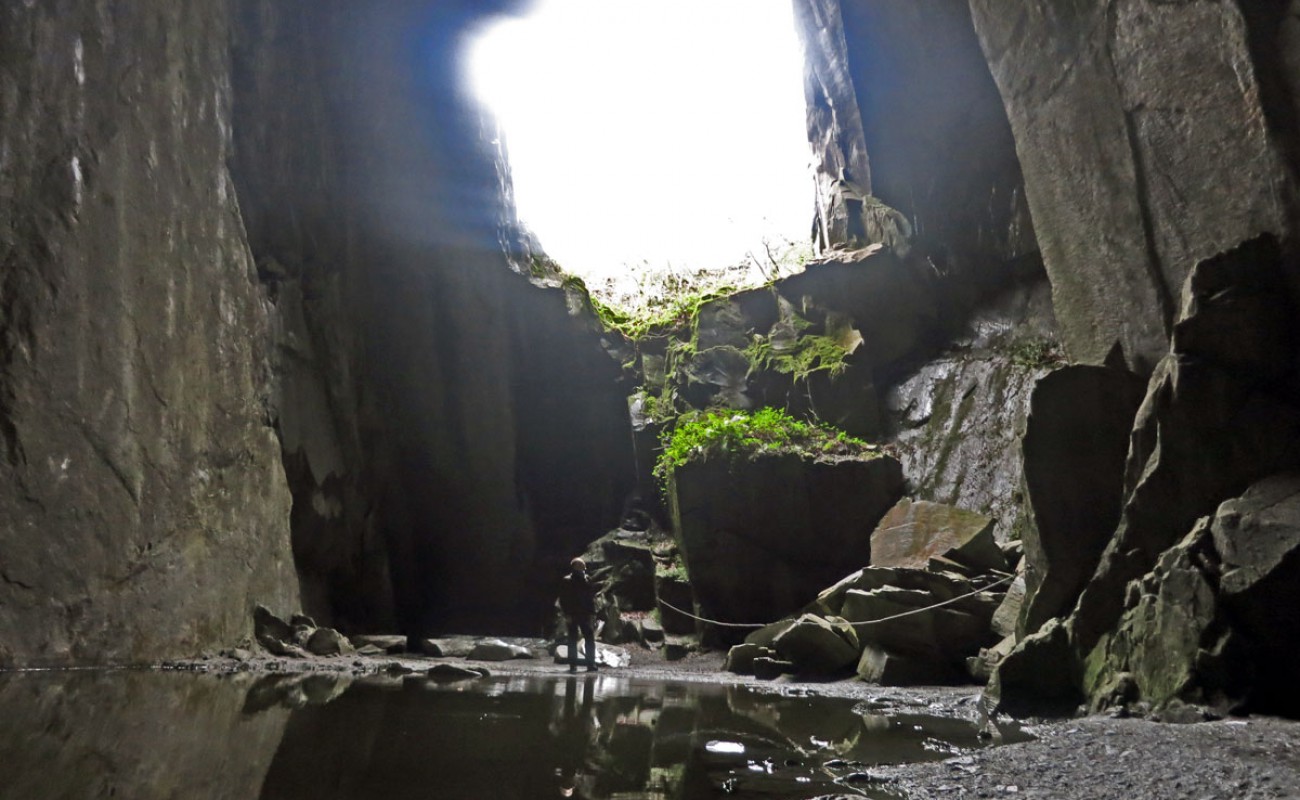 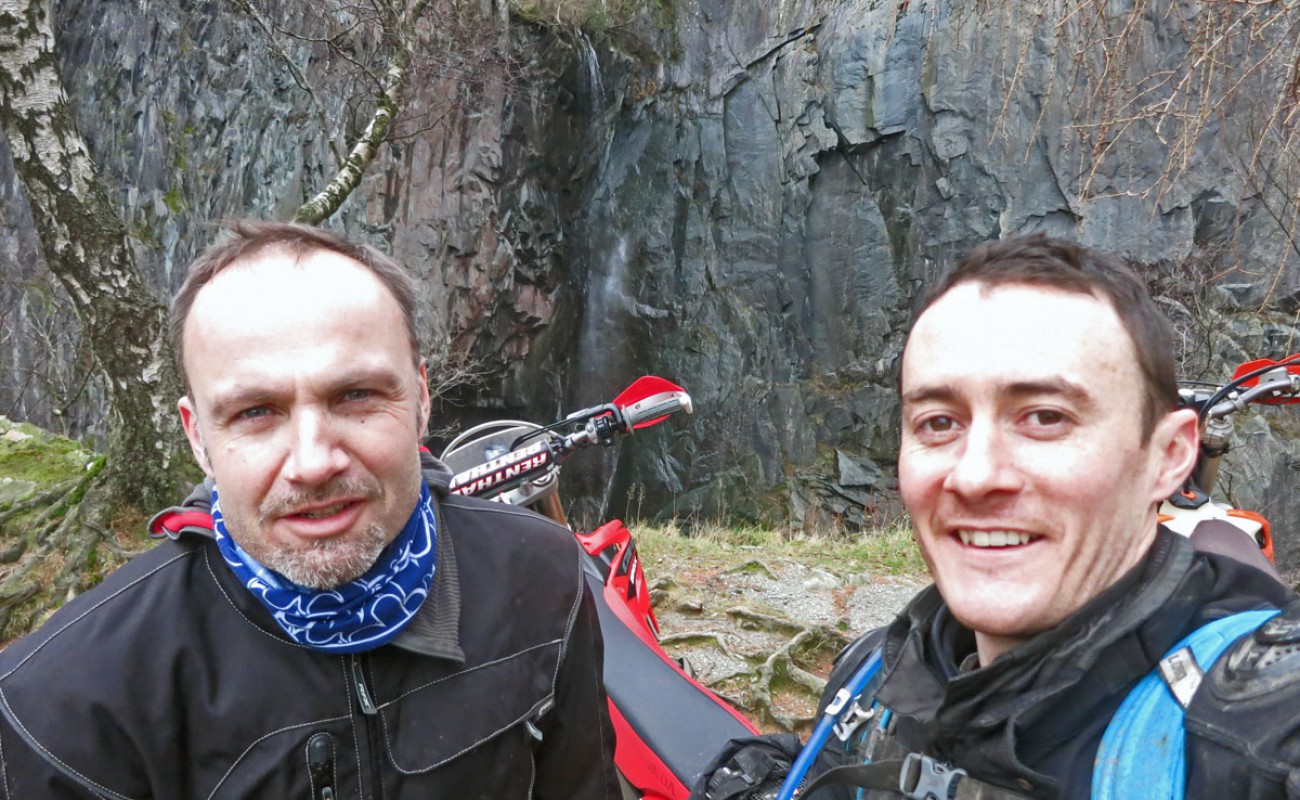 Most trail riders zoom past Cathedral Cave without ever realising it's there.

Personally I think a few scenic stops make for a more memorable day and with this in mind as we reached Hodge Close quarry we stopped again to look down into the impressive workings. This green slate quarry ceased large scale production in the 1960's. A huge 300 feet deep pit now lies redundant, half filled with water. It's an impressive sight and worth taking a few moments to seek out.

Back at the ferry slip way things were not looking good. Storm Desmond was beginning to kick in. The wind was up and the ferry, now at the other side of the lake, was going nowhere. The light was beginning to fade and we were now faced with doubling back on ourselves and taking the long way home via Ambleside. Strangely, Greg looked very happy about this.

He had recently "invested" in some extremely powerful cycling lights which were now strapped to his helmet and ready for action. Getting home in the dark was something he'd secretly been hoping for. By the time we reached the pass from Kentmere to Longsleddale it was dark, very dark indeed. Except in front of Greg, where it was bright, very bright indeed. I was now following his floodlight in the very exiting zone of semi darkness between my front tyre and his number plate. This made a very familiar pass very unfamiliar and I can now see the appeal of riding at night. 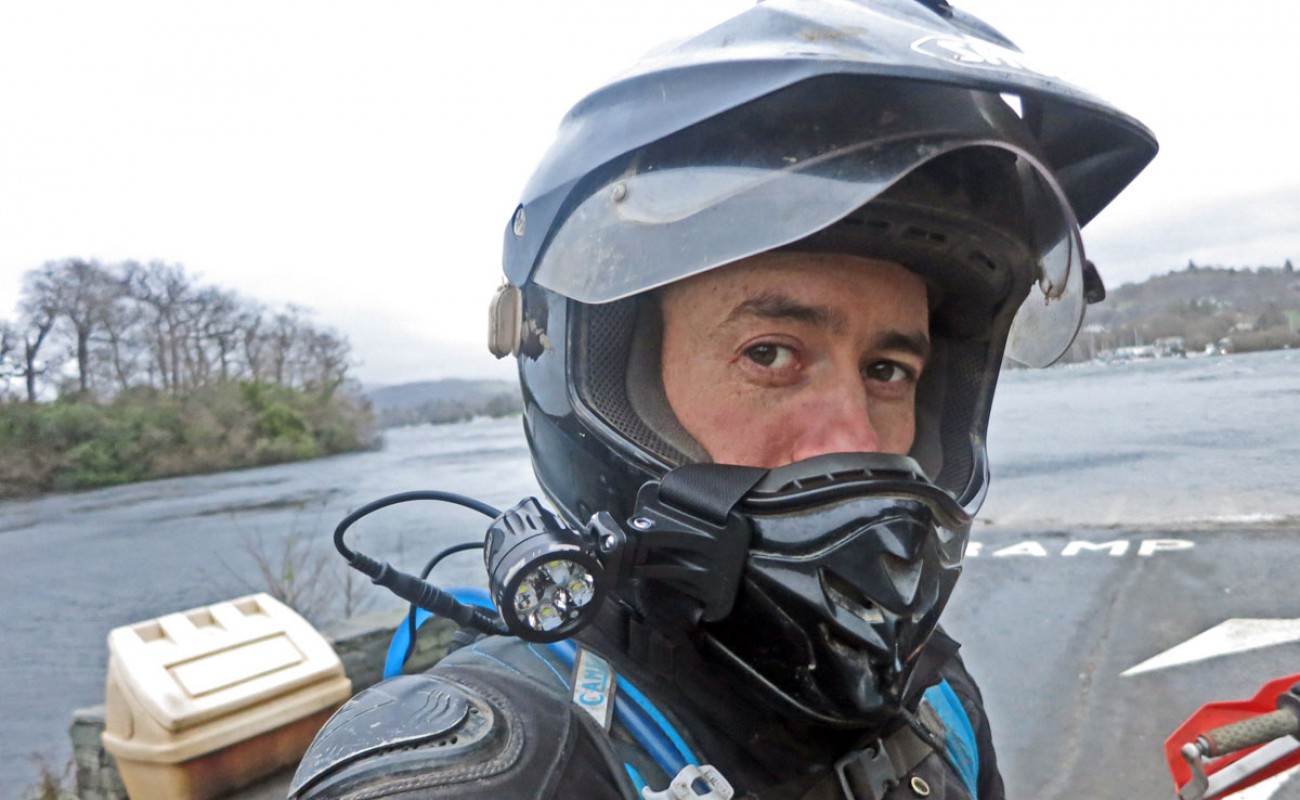 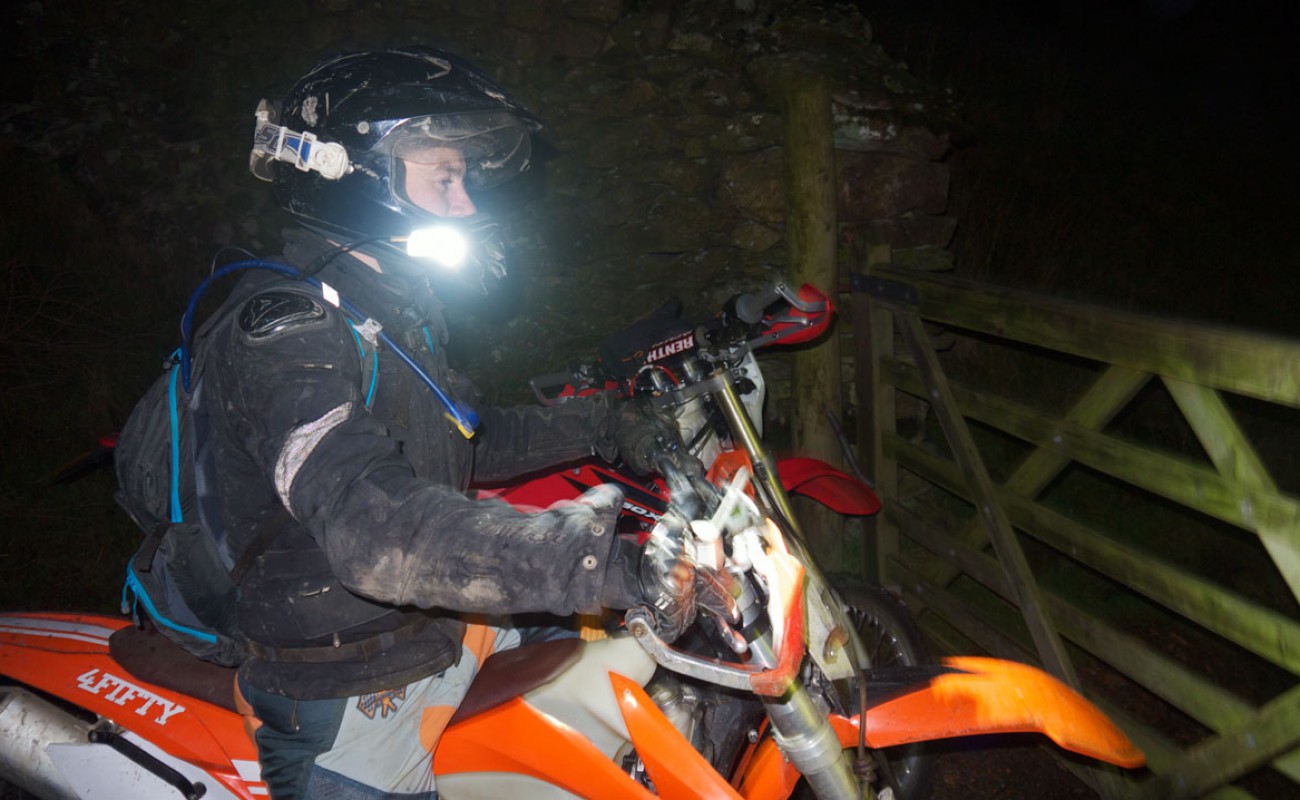 Let there be light... (courtesy of Hope Industries)

It was an exhilarating end to a great day out on my new bike. What the CRF lacks in illumination it certainly makes up for in it's light weight, power and handling. It's easy to see why Honda have been making this great bike for eleven years. By the end of the following day Cumbrian villages, towns and a city were under water. Roads and bridges had been washed away. Lancaster was without power and almost ten thousand cars were never going to start again. Greg , no stranger to epic river crossings, only made it back to Northumberland by pushing his Nissan Micra, trailer and KTM through several floods single handedly. Only to get home to a house with no electricity. Luckily he'd been wise enough to invest in some outstanding auxiliary illumination. The TRF is encouraging all trail riders to ask their local MP to stand up on their behalf in the debate over the future of Green Roads.

We've made it super quick and easy.

Click here to get involved and be part of the future of trail riding in the UK.