The Byway Tour of Great Britain

A beginner’s guide to the TRF

The Yorkshire Coast to Coast Earlier this year, as the winter nights drew close, a plan was hatched by a small team of adventurous fund raisers to put together the UK trail riding journey of a life time. Riding the length of England on as many Green Roads as possible.

The Bike Tours For The Wounded team hoped that the trip would help raise much needed funds and give a select group of trail riders a journey they would never forget. It’s the trip we’ve all dreamed about but few have attempted.

Many, MANY hours of planning later, as the countryside awoke to summer, a plan was in place. 14 members of the Bike Tours For The Wounded expedition team would ride from Northumberland to Wiltshire over 9 gruelling days.

If that weren’t enough, going the full hog, a group of intrepid riders would set off from the tip of Scotland and head south to join the team. Carla McKenzie, Andrew Byatt, and James Higgs were to embark on the full JOGLE (John O’Groats to Land’s End) trip, accompanied for stages by motoring journalist Paul Blezard and Ben Clews from CCM, riding to Wiltshire and finishing on the most southern tip of England.

We caught up with James (Wiltshire TRF) to find out how the trip unfolded.

TRF: How did you get involved in Carla Mckenzie’s Byway Tour of Britain?
James: It seemed like a good idea at the time! Only joking!  Carla and Andrew (Byatt) invited me to join them just two weeks before the start of the adventure, so I stopped work and frantically prepared as best I could in what little time remained.  A great deal of late-night fettling resulted in my (now) trusty KLR650 and I being taken from Wiltshire to Thurso in a Sprinter van booked via the Shipley delivery website.  The journey North took about twelve hours. Prior to being invited I had planned a riding itinerary for a few days of the journey in order to guide the Bike Tours for the Wounded riders, who Carla and Andrew would be accompanying for much of the journey.  I – and many other members of the Wiltshire Group – had also helped Carla learn to ride a motorcycle ‘off tarmac’ and quickly brush up her trail riding knowledge. The routes for the majority of the trip were planned by Bike Tours For the Wounded organiser Martin Wellsted with huge input from TRF members all over the country. Andrew contributed and also planned the extra sections through Scotland and the south coast. 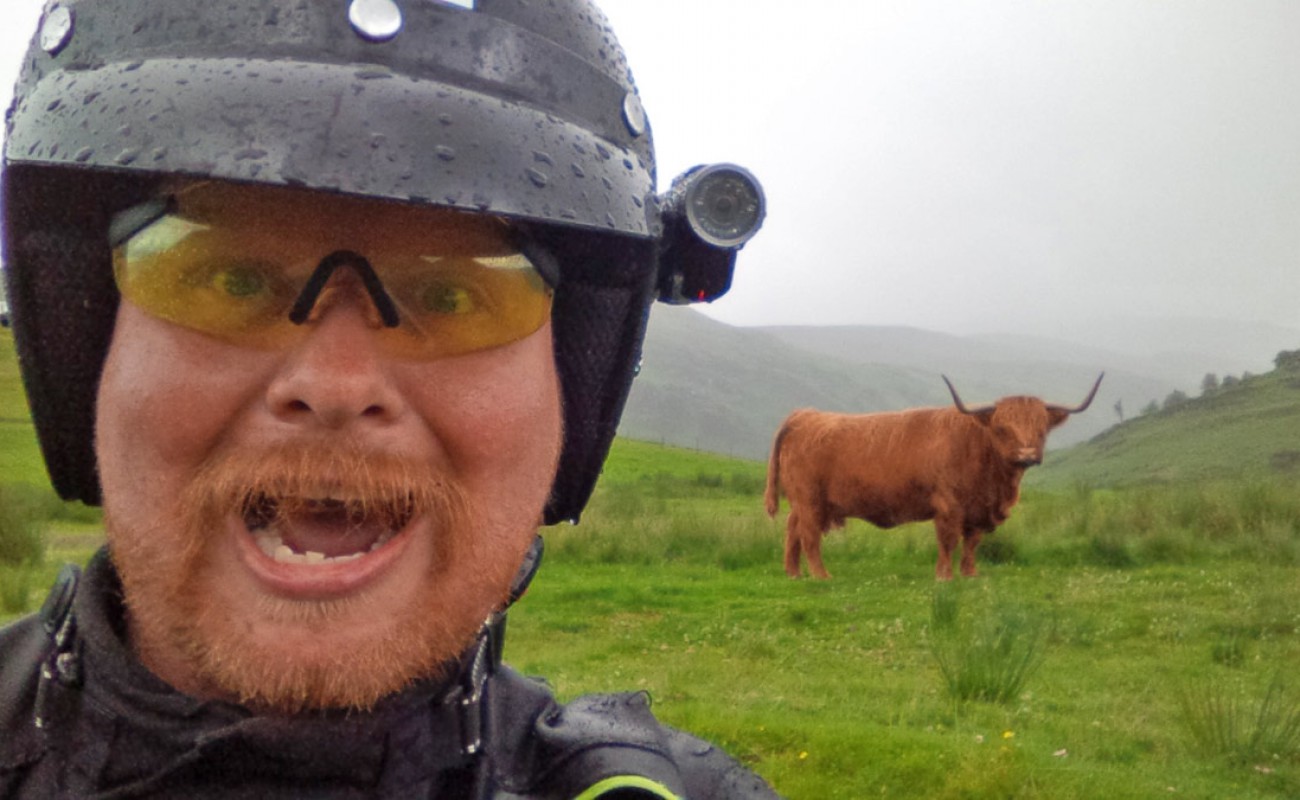 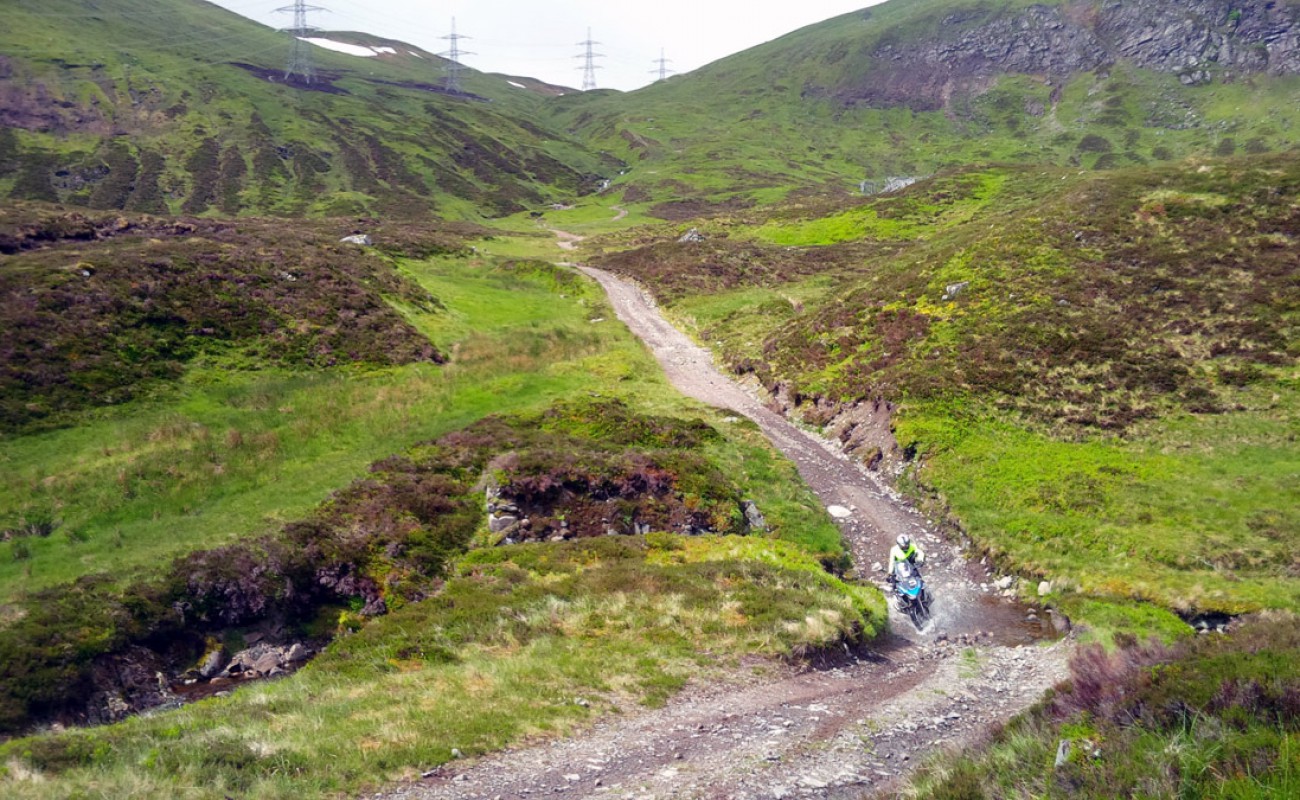 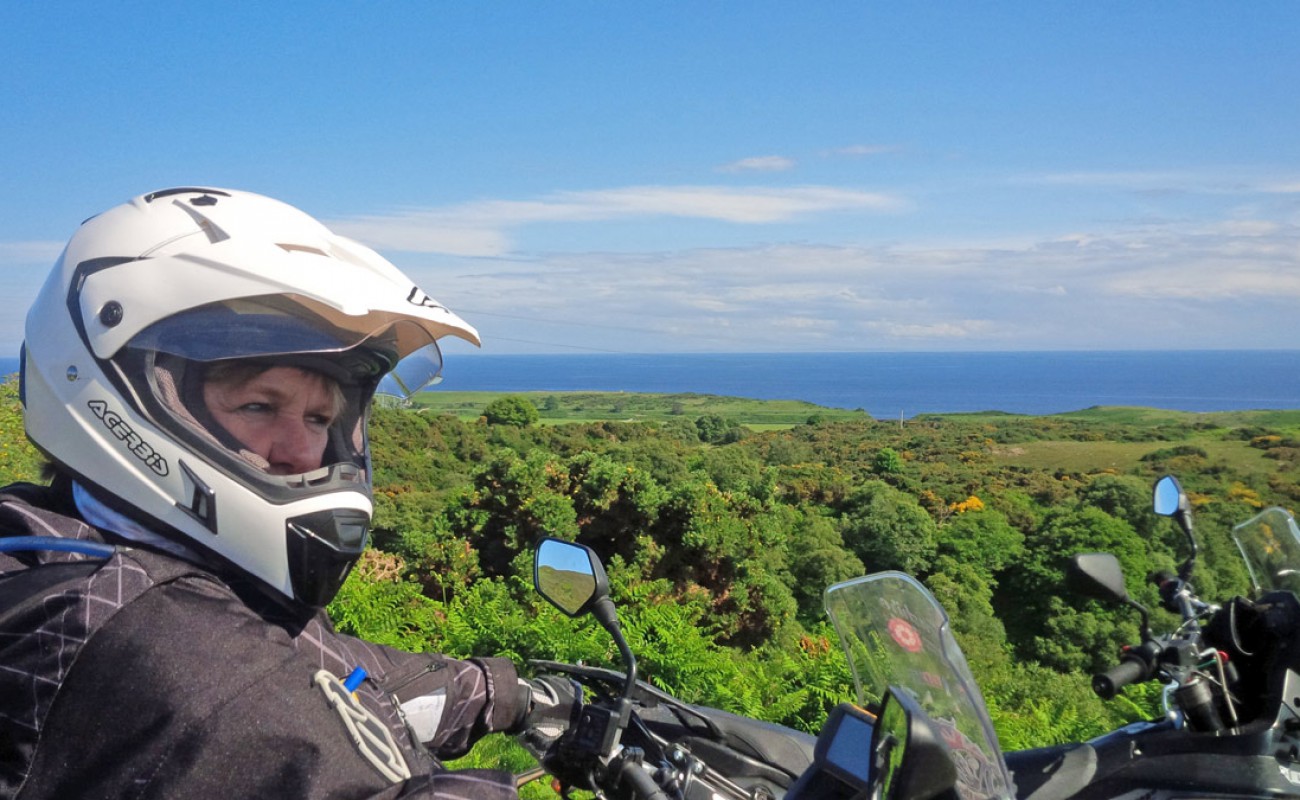 The journey begins. The team head south through Scotland

TRF: You obviously did a lot of miles. Can you outline briefly where you went and how much of it was on Green Roads?
James: About eighteen hundred miles, all in.  I think about a quarter of the non-Scots riding was undertaken on green roads, though this often equated to at least half of each day when the variance in rider ability was taken into account. The first ‘third’ of our journey (through Scotland) was thin on green roads, though Carla and Andrew managed to secure access to some private estates and nature reserves in order to ride the rough, made-up roads that are used for service and access across these great swathes of land.

The highlight of this leg of our journey was an impromptu diversion to Fort Augustus to see if riding the twenty-five mile Corrieyairack Pass was a possibility.  A team charm offensive obtained the requisite permission to access the pass from a private road – something essential for Andrew as his R1200GS was too wide to make it through the initial hundred meters or so of the pass which has been width-restricted.

The second ‘third’ of our journey was a much more conventional trail ride from Haltwhistle to Calne taking in the Lakes, Peaks, Cotswolds and two days in Wales.  We split into two groups during this leg to account for the differences in ability amongst the Bike Tours for the Wounded riders. TRF groups all over the country pitched in and either led us in person or provided GPS routes for us to follow.

We could not have done the journey without the generosity of these TRF members.

The final ‘third’ of our journey from Calne to Land’s End was a slightly less pressing affair though the ride from Calne to Tiverton was both a long and tiring day.  Our morale was greatly improved by the presence of adventure biker Steve Burbidge and motorcycling journalist Paul Blezard.  Paul had returned to the adventure having ridden with us for the first ‘third’ and was very much the ‘wise bard’ of the team, whilst Steve’s formidable trail riding prowess on his 125cc Chinese scooter left us both speechless and amused! 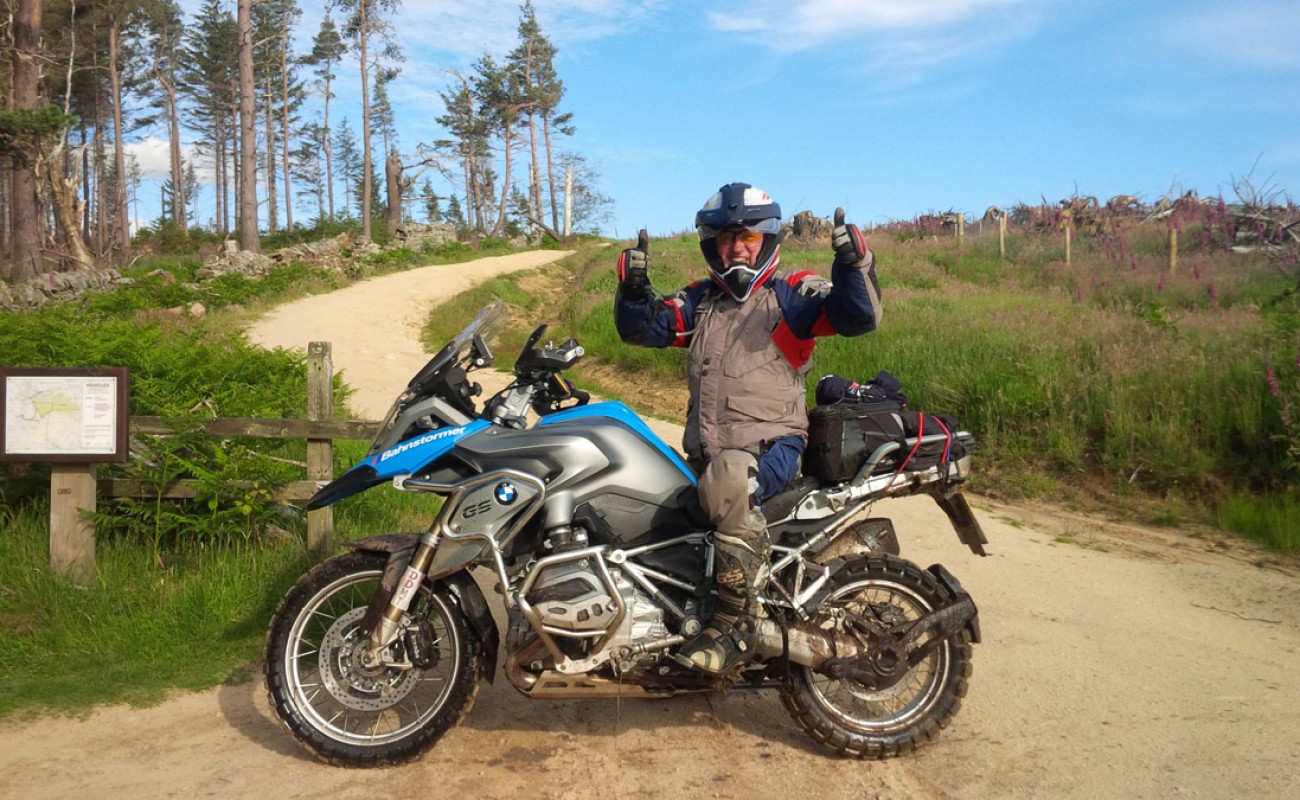 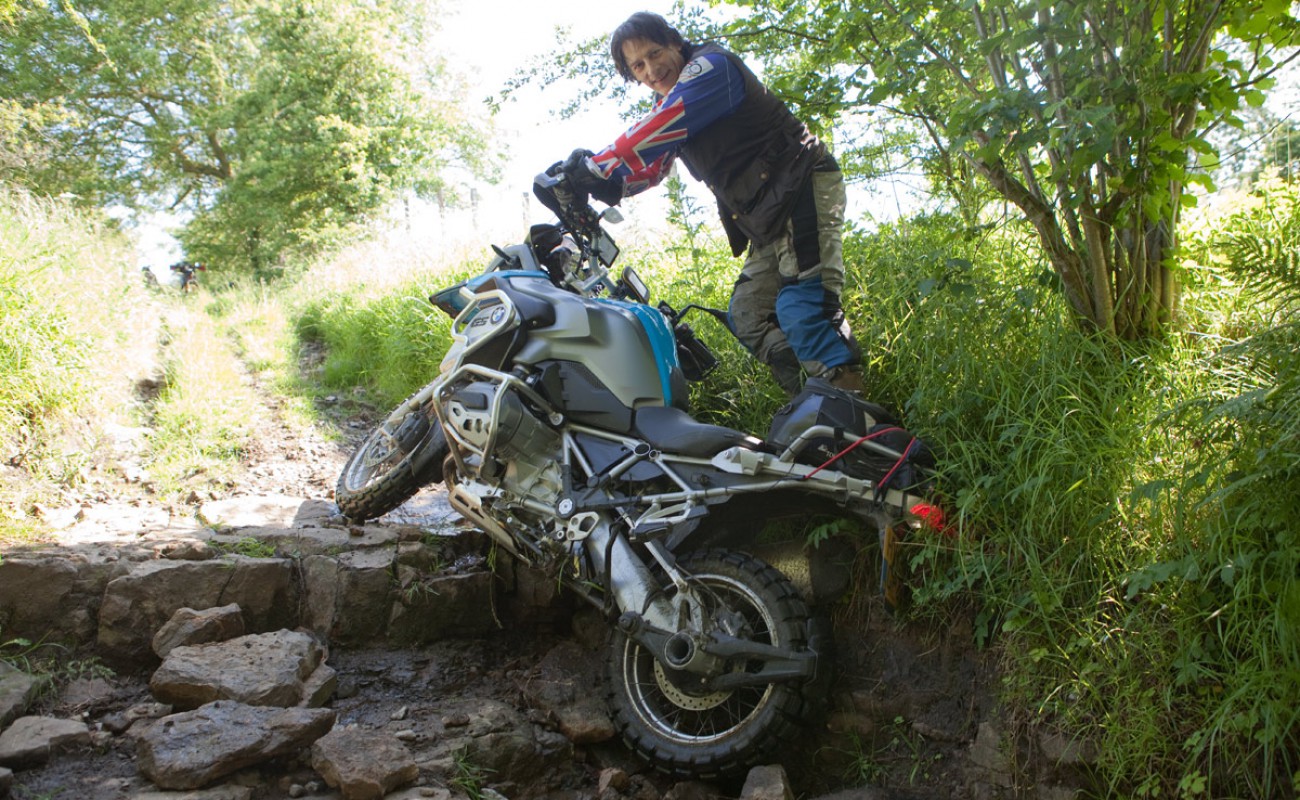 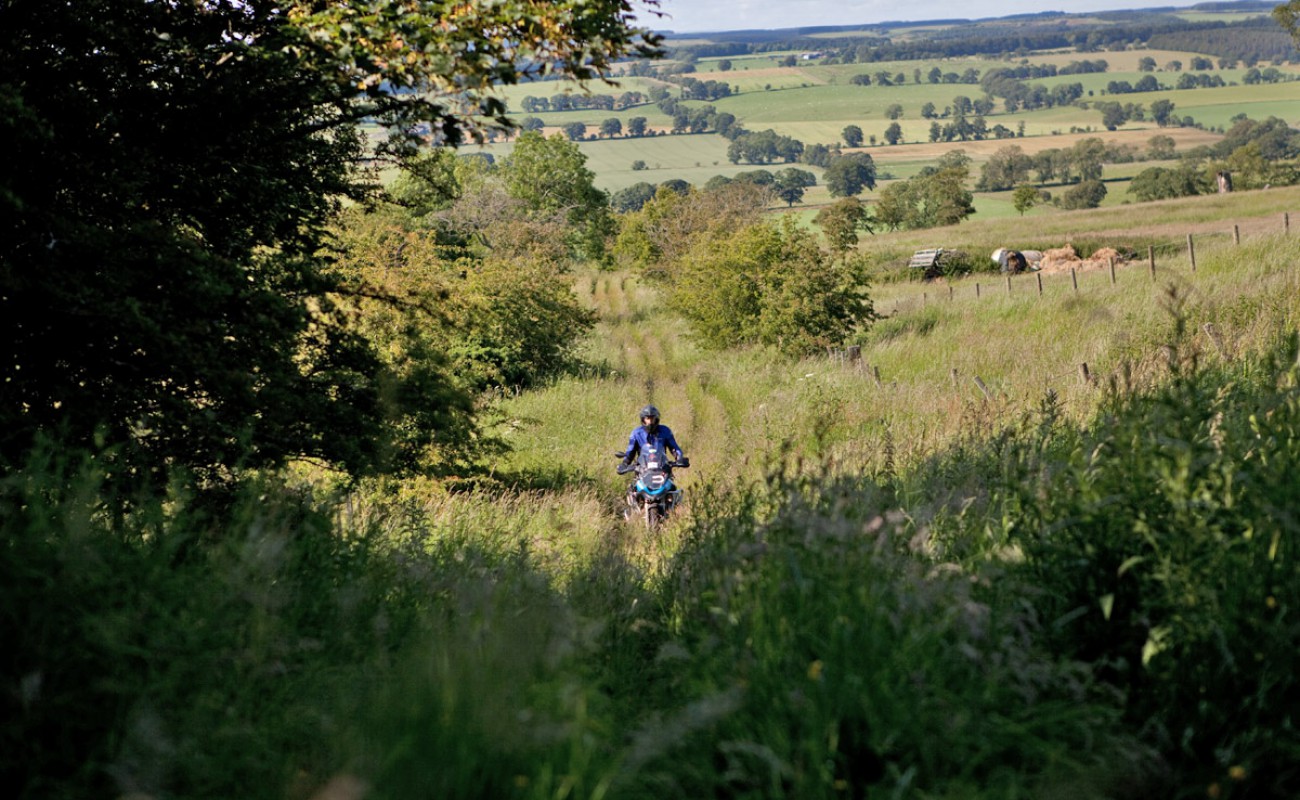 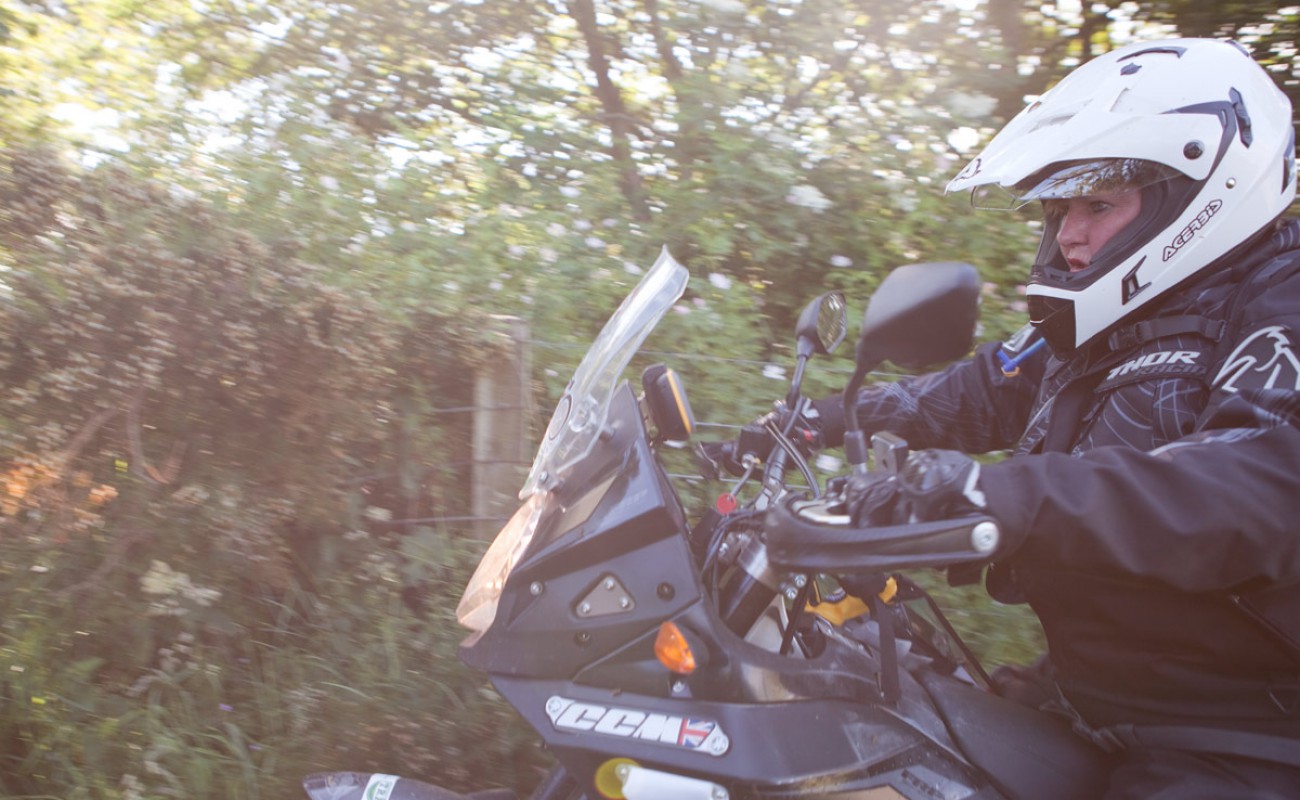 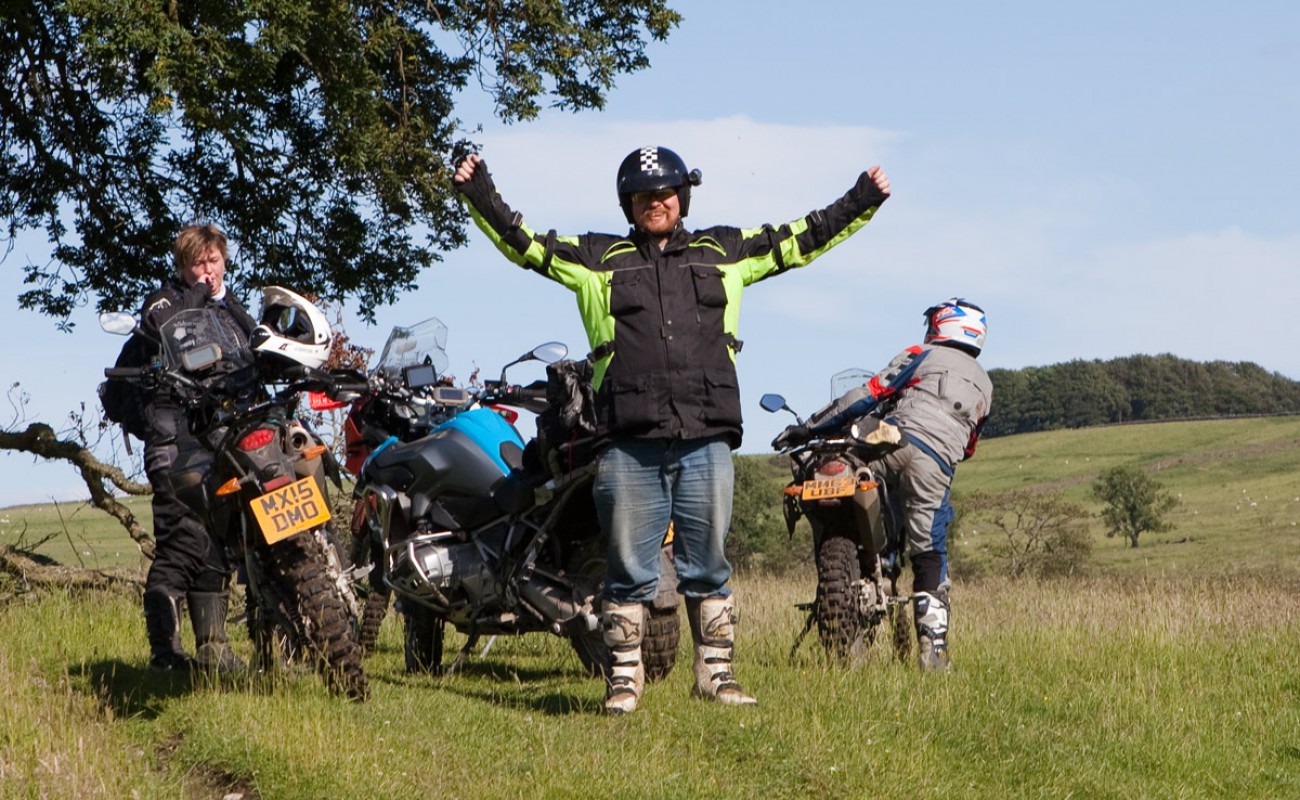 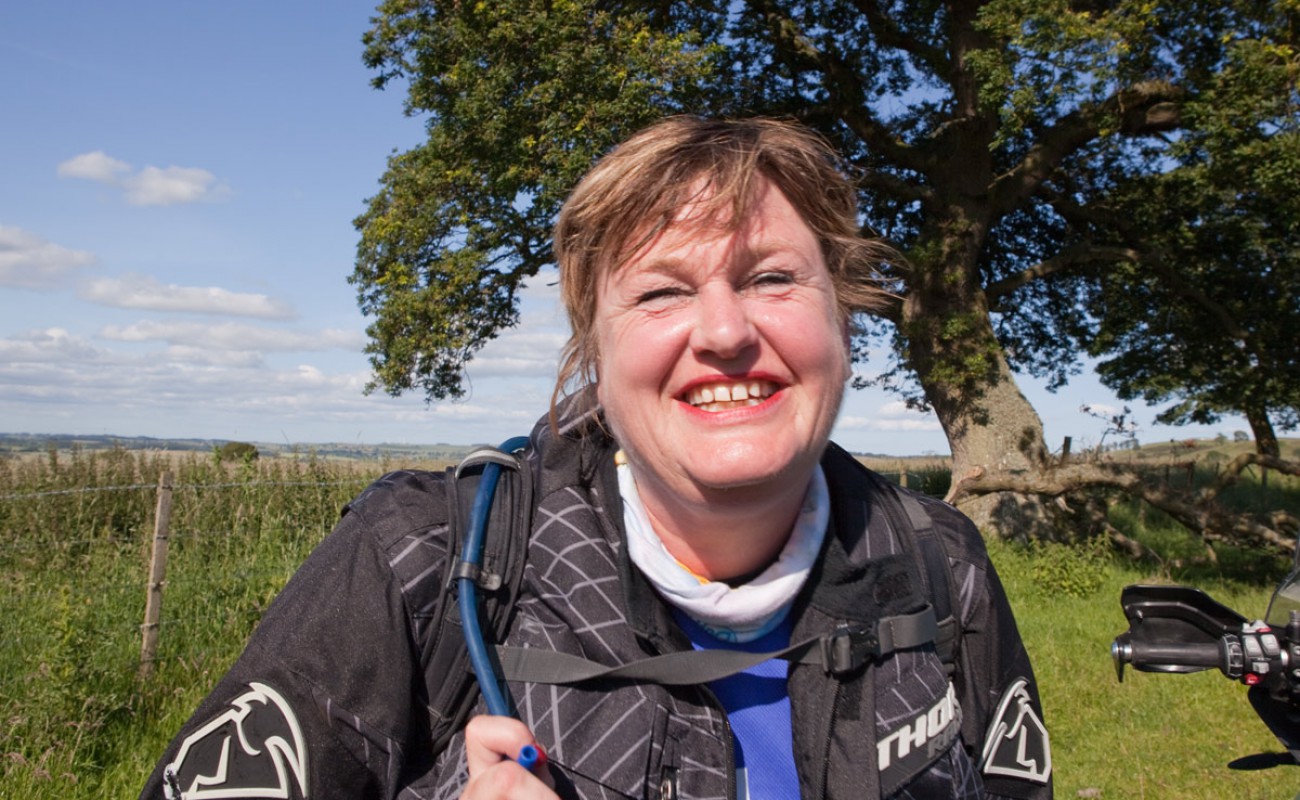 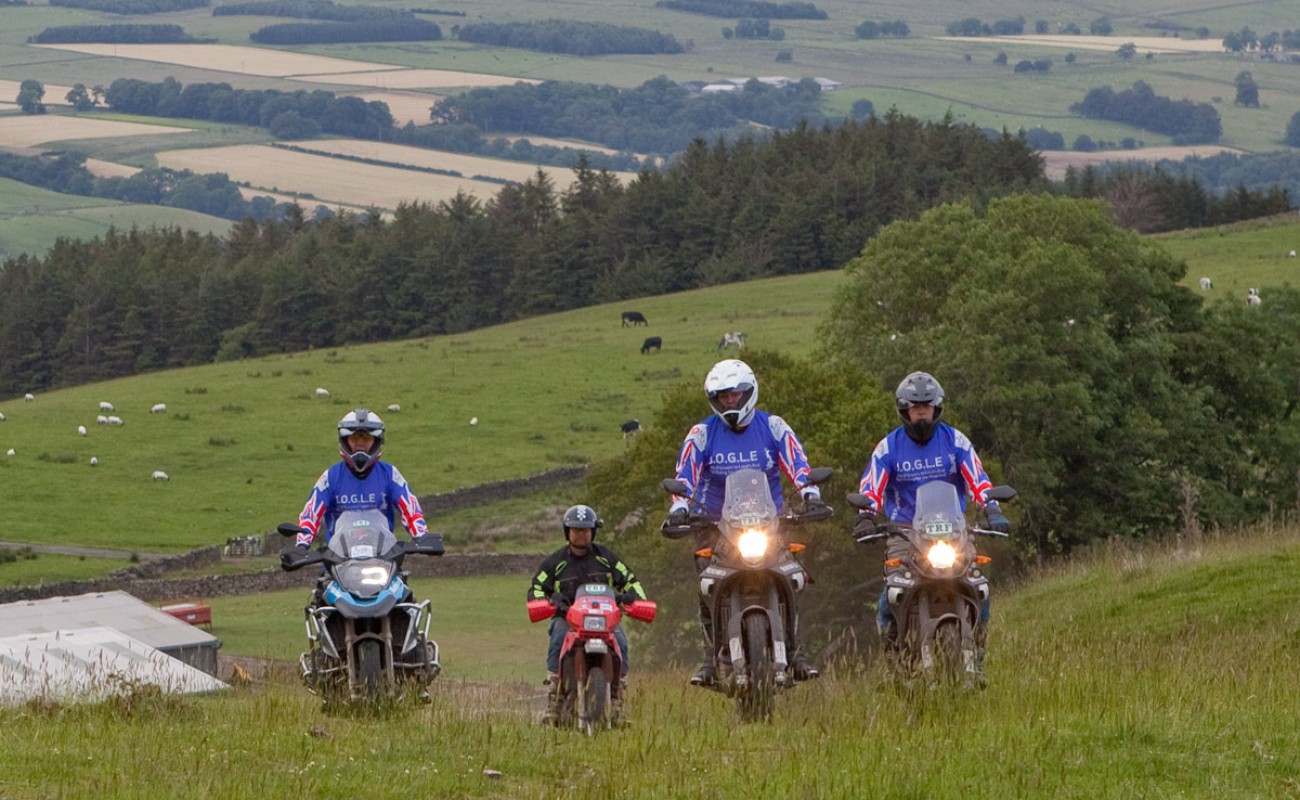 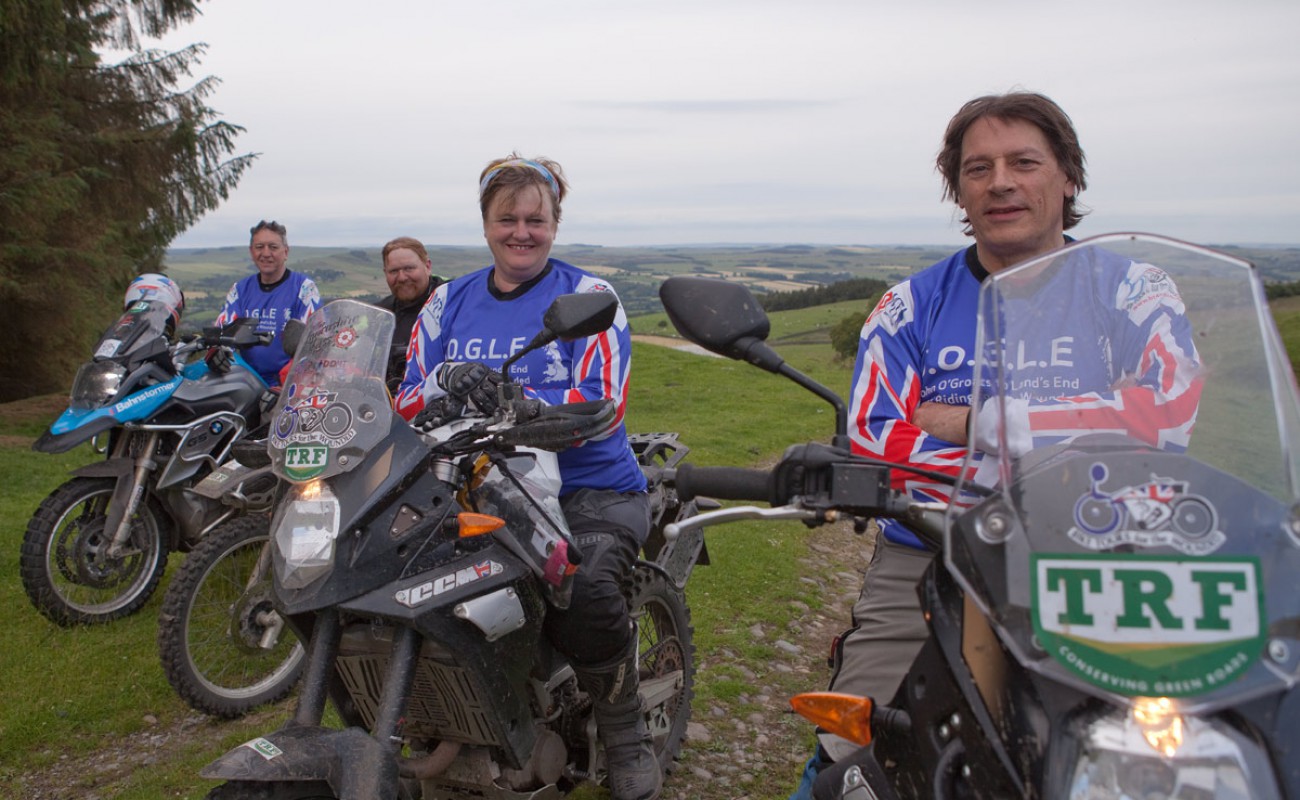 TRF: There must have been some amazing moments on the trip, as well as a few hard ones. What were the highs and lows? Any stand out moments?
James:

My favorite part of the trip was making lots of new friends after having genuinely enjoyed the time I spent riding with them.  It still amazes me how motorcycles and the camaraderie amongst motorcyclists can bring people together.

There were no real lows or disappointments other than the sincere wish that the Bike Tours for the Wounded riders could have continued riding with us to Land’s End (and a few hours of uncertainty when a partially blocked carburetor main jet caused my bike to run poorly). One incident does stand out in my memory of the trip. We rode Coneygarth Lane, an unclassified road located just south of the Lancashire town of Kirkby Lonsdale.  Eventually the lane yielded to one of the most formidable river crossings that I have ever seen, spanning – by my reckoning – roughly one hundred and twenty feet of the River Lune and compounded by a ten-foot sheer riverbank on the far side to further deter anyone foolish enough to attempt the crossing.  I am unsure exactly who said it, (or indeed if they were correct) but at this point it was mentioned that the author of the day’s GPS route was actually riding with the leisurely group.

Naturally, we quickly retraced our tyre prints in order that they too might benefit from the lesson that we had learned twice during the morning’s ride – that there is no substitute for up-to-date local knowledge.

After a stout supermarket lunch we found ourselves on the other side of the river so decided to investigate what lay beyond the vertical riverbank which had previously denied our passage.  A fierce fight through a very overgrown lane eventually led three of us to the perilous riverbank in question, whence we promptly took a group photograph which was later used that evening to gloat to a bemused and dumbstruck leisurely group about our successful crossing of the river! We crossed it. Honest!

TRF: I think John O'Groats to Land’s End is probably a trip that many trail riders dream of. Do you have any words of wisdom for others that might be looking to follow your footsteps? Anything you would have done differently?
James:

My advice is that if you can make the necessary time for such adventure, to go for it!

Many trail riders have now completed the JOGLE/LEJOG and between us we have a valuable bank of information to share.  The ride can be completed for only a few hundred pounds providing you make proper preparation and limit yourself to riding sensible distances each day.  Day-in, day-out riding is a lot easier and more enjoyable when you’re not forcing your body to endure an extra lane or two over what it can take. I was fortunate to join the team when much of the preparation had been done (thanks Andrew!), so all I needed to do was pack my kit and get my bike ready.  My biggest ‘worry’ was that the dozen or so memory cards that I had ordered for my camera would not arrive in time, which would have been in no way prohibitive to my enjoyment of the adventure.
TRF: You must have a good view of the state of the UK’s Green Roads right now. What was your take on it all?
James:

During the adventure we rode on fell, rock, cobbles, slate, grass and dirt through a mixture of forest, mountain, field, water and ancient lane, so encountered a thorough representation of both the diverse geology that constitutes Britain’s green roads and the many different types of people who also enjoy using them.

The different needs and priorities in each area were reflected in the attitudes and actions of any given area’s respective TRF Group, so what might work, or - dare I say it - be acceptable for any given Group might not be well-received by another, to name but one difference. One of the more frustrating uses of green roads

Some absolutes do still sadly persist.  Fly-tipping appears to be more widespread this year – something which can presumably be traced back to the selfishness of people unsympathetic and impatient to the financial constraints of local authorities.  The only positive point to come from this is that TRO’s which exclude motorcycles also appear effective in deterring fly-tippers.  Examples of this include Slaley Forest in Northumberland and the Fosse Way in Wiltshire. As ever, the more remote (and sometimes dead-end) lanes that we rode were often the most interesting and fun.  Many lanes are at risk of being reclaimed by nature because today’s rider only seems comfortable riding the ‘usual’ lanes with which he and his friends are familiar.  If each Group occasionally undertook an ‘old school’ exploratory ride armed with secateurs and folding saws to ‘beat the bounds’ then overgrown lanes might become a thing of the past, with their historical use re-established through adventure, teamwork and camaraderie.
TRF: Finally, why do you think that journeys like this are important? Has it influenced you at all, in terms of your riding, your attitude to green roads or your view of Great Britain.
James: Though testing at times, the ride was always a pleasure and will be a lasting memory for all concerned.  We’ve helped raise nearly £12,000 so far and between us have contributed thousands more to the economy ‘by way’ of motorcycle tourism.  The support we received from local TRF Groups was outstanding, with many volunteering guides, local knowledge and hospitality to us.  This ‘fellowship’ is especially important as the Bike Tours for the Wounded section of the adventure is to become an annual event with riders being encouraged to join the TRF before the event, so is mutually beneficial to both organisations. 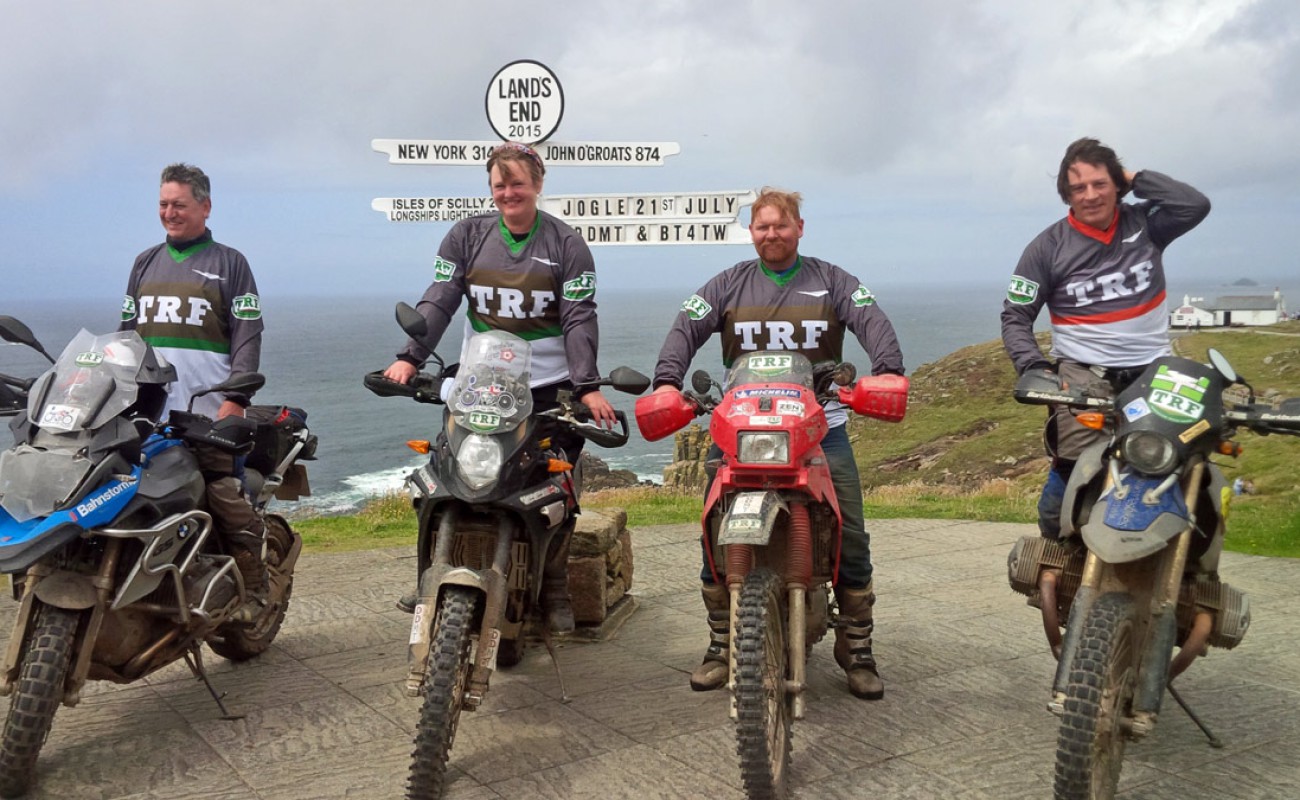 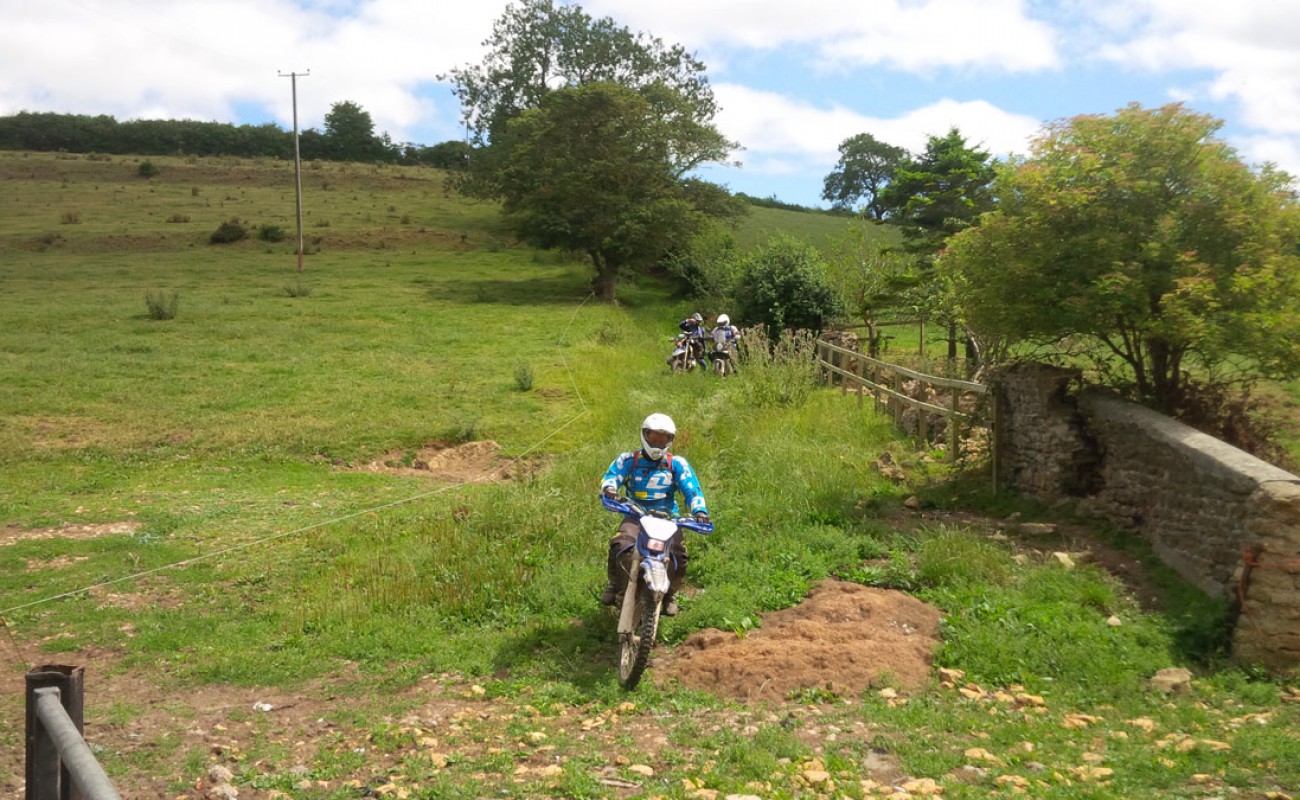 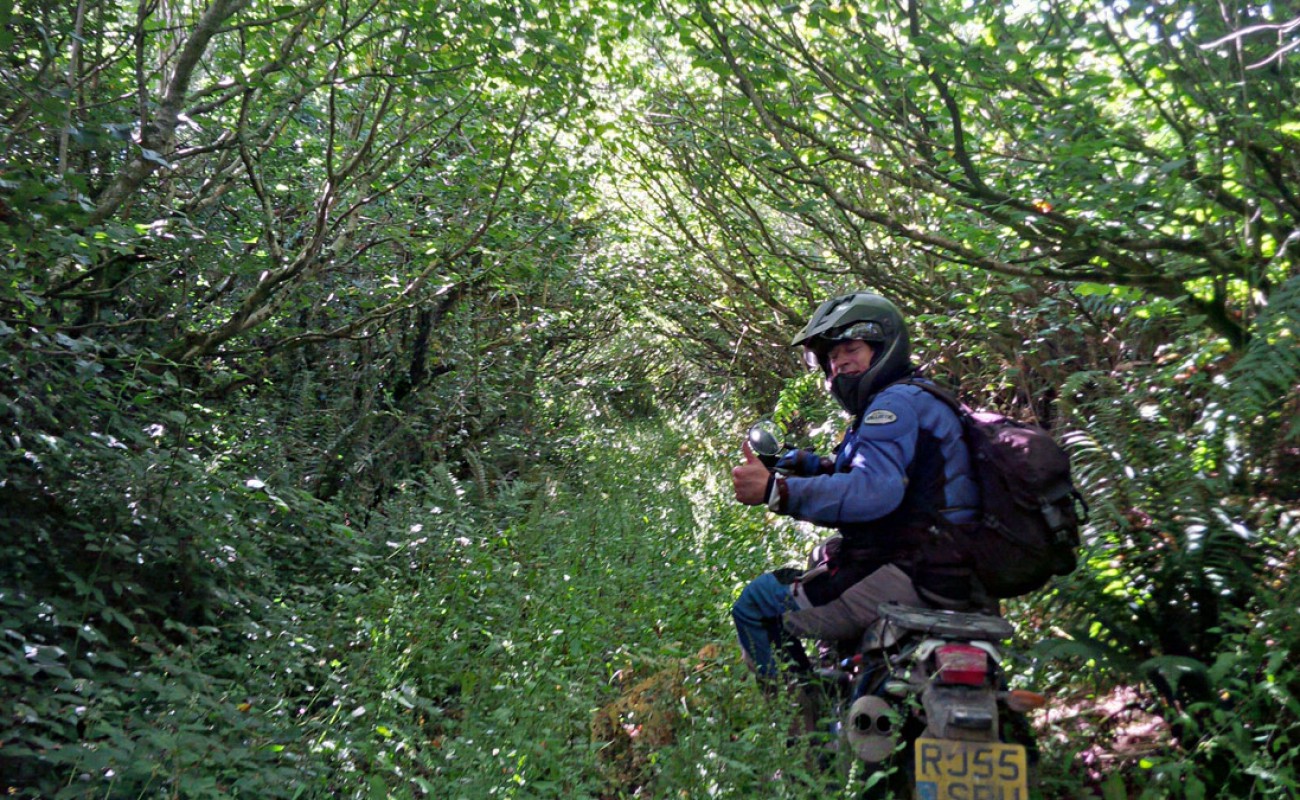 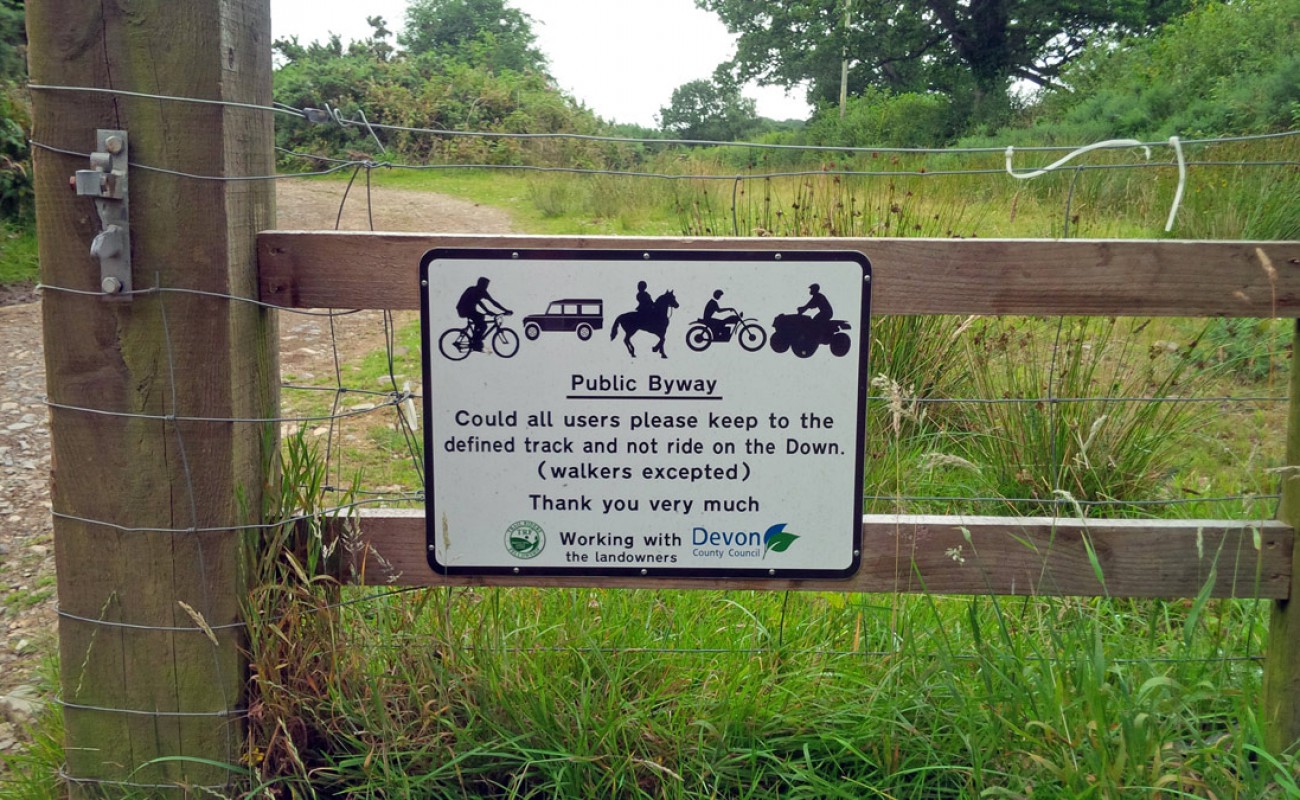 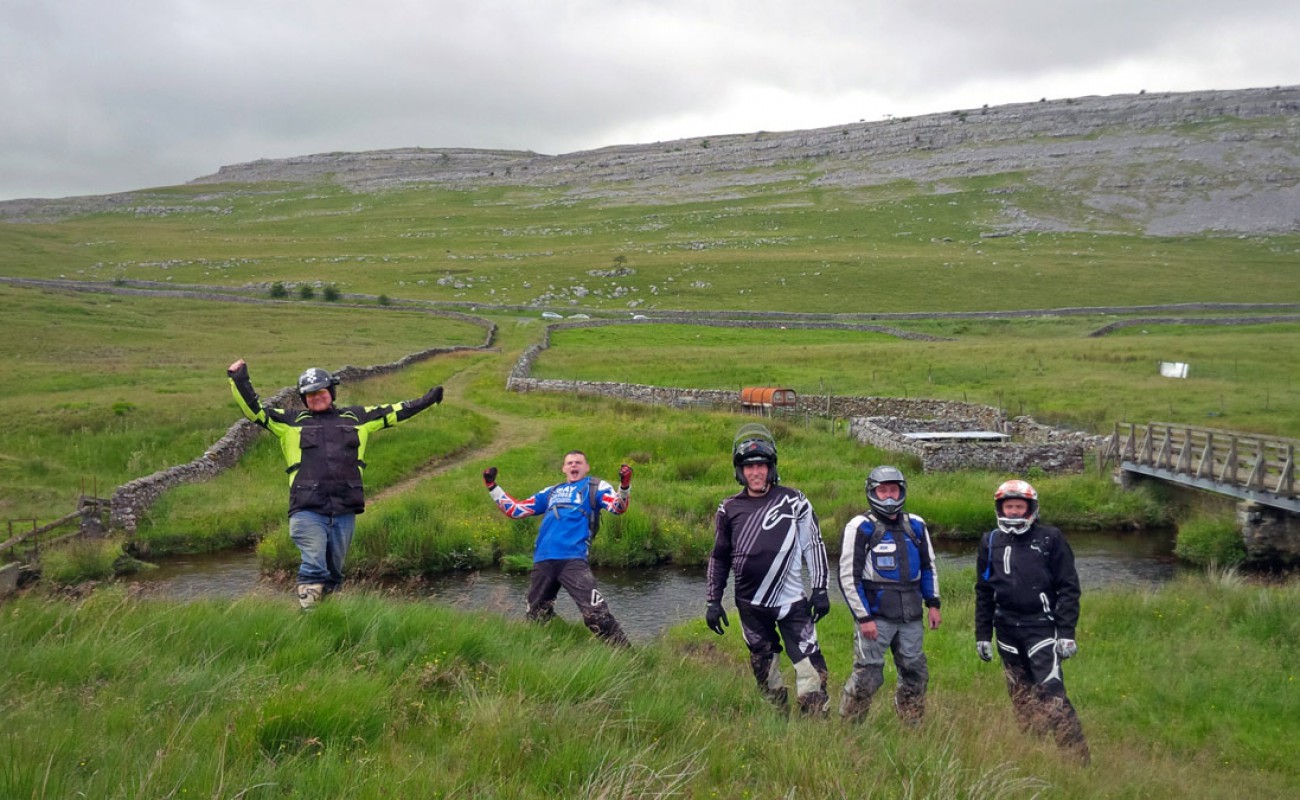 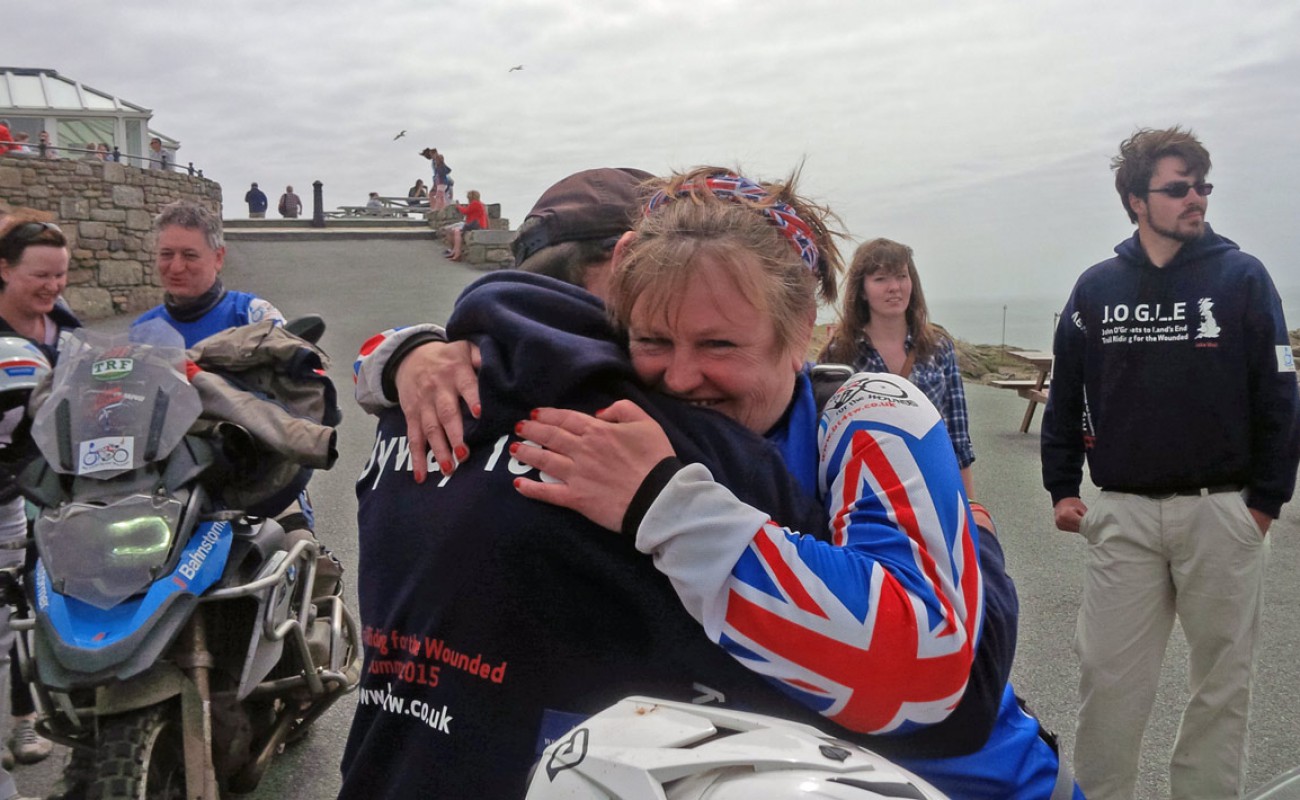 The length of Great Britain and an English trail ride that will be remembered by all. A fantastic achievement. The Byway Tour was initiated and planned by Bike Tours for the Wounded with help from TRF groups and individuals around the country. All funds raised from the trip go towards helping injured service men and women embark on their own week long supported motorcycle tour of route 66 in the USA.

Plans are already underway for the next Byway Tour of Britain adventure which will leave Northumberland on 2nd July 2016. For more information or to book your place, contact Martin Wellsted

In addition to the Byway Tour (Northumberland to Wiltshire) Carla, Andrew and James all completed the full John O’Groats to Land’s End trip. You can read an in depth account of their journey on Carla’s blog.