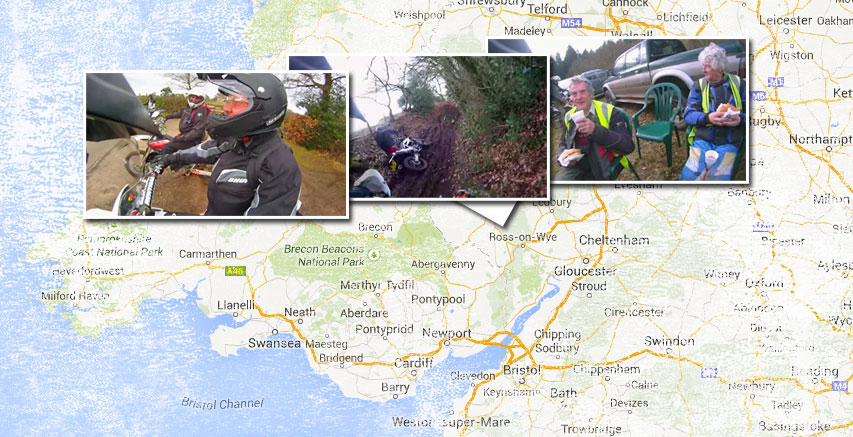 You've got the bike. You've changed the oil, checked the brake pads, polished the plastics and managed to get yourself invited onto your first ride out. "What have I let myself in for?"

We've all been there, excited and nervous in equal measure on the night before venturing out for the first time, worried about making an idiot of ourselves in front of experienced riders. Well, thankfully the TRF is one of the best places you can start out. The club is full of generous, patient and experienced riders who are only more than happy to show you the ropes, members like Graham 'Gray' Hutton from South Wales TRF. He recently took a small group out on their first ride out. Here's what happened. Watch Gray's film of the ride

Two new members Stu and Russell came along to our South Wales Trail Riders Fellowship, April meeting. Stu being a complete novice on the trails, had bought a nice and shiny AJP 250 PR5 to try out his new found pastime. Russell was on his bargain buy of a Yam WR250, and a very tidy bike it was too. He used to ride a while ago and has now come back itching for more. I think Mike and I gave plenty of advice on what too wear on the day, and most newbie’s tend to over do it on the coats jackets and scarf’s plus the woolly jumpers ?!!

You will get hot very quickly trail riding, so the advice is always - one breathable race shirt, your body armour , and then your jacket. Lower half padded shorts, knee pads, enduro jeans and waterproof socks and your choice of enduro/motocross/trials boots.

So the plan was formed, Mike would also bring his mate Dave along again, who rides Mikes spare road registered CR250 for the day. Dave has a little experience of this unwieldy little beast and has the sole of the foot bruises to prove it. We did constantly remind Dave that a bike with an electric start is so much easier, and I think he got the message….Or shall we remind him again ….??? And again…??

We meet in sunny Ross on Wye, and make final adjustments to Stu’s tyre pressures to get him under way. He had mistakenly dropped all the air out to 4.5psi due to a sticky pen pressure gauge. We pumped it up to a healthy 14psi.

He admitted his nerves were a little frayed, and we assured him that we all used to get like that, and no need to worry at all. The days riding would progress at a very leisurely pace with plenty of stops, and all geared towards Stu and Russell.

After a brief stop for a top up fuel we were on our first BOAT of the day, which was a nice flat and horse trodden short lane that meandered and snaked along nicely. All made it through safe and sound, so a quick pause and bit of pre warning on the next BOAT too be taken. This one was a long downhill section on nice and soft horse trodden loamy ground. The steep section at the top had Stu’s feet dangling off the pegs, but he made it down with a tight hold on the bars and probably clenched butt cheeks??!

A thumbs up was given to show all was well, so I then led them onto the next Byway just a mile up the road. The reasonably flat and wooded trail was a bit of a tester, as there were a few branches on the surface, and at eye level in places, to watch out for. In places it was also a little rutted and boggy from tractor use, which had broken the surface enough to cause a few hairy moments for our newbies. A quick cross rutting had Stu tumbling to the side but nothing dramatic, and we quickly picked him up and gave him some recovery time. His face had changed like a chameleon to Honda red by then, and I think a cig break was calling!

Russell, alongside Dave, had made good progress along the lane. and even had time for a brief discussion with the farmer regarding the byway. Nice chap but alas still adamant that vehicular traffic shouldn’t be on a BOAT! So a well earned pit stop was due as I led them to the Offas Dyke Horse Endurance Event near Coleford, for a chat with some of the Gloucester TRF group over a warm coffee and a burger or two (Mike!).

The Gloucester TRF group, had plenty of volunteers in the end, to help mark out the two day event on their trail bikes. Ready, for some 160 horse riders to test their skills and nerves on the newly laid out route. Orange plastic ribbons are hung temporarily for the two days along the route at intervals and strategic points of deviation, to guide the riders along their respective routes. Checking of the routes needs to be done quickly and efficiently, hence the request from the horse events organisers for the TRF’S involvement.

We said our goodbyes to Mark,Simon,Jackie,Richard and Vic,and thanked them for their hospitality and were on our way. The CR seemed to now need  a top up again, so a trip to Cloeford was undertaken. Whilst I was filling up, and in the near distance I could see Mike being spoken to by a lady patrol car officer. I think it’s the dark shades that makes him look rough n tough, so we might have to start calling him Starsky or Hutch ? Anyway, the advice she handed out was that we shouldn’t be on the roads, because our bikes are muddy and we have no indicators. Well, enough said really. She turned around and headed back to her station office for her tea and hob nobs. We hope that she researches the TRF and the next time we meet her, she will have a full understanding of who we are, and what we represent. I hope?

We then headed onto Redbrook and the fantastic Wyegate lane, which almost runs parallel with famous Offas Dyke path. The Wyegate is a rocky and well canopied trail, which runs for around a mile. It’s a well used old road with mountain bikers, walkers and the 4x4’ers on occasions, although a little narrow at times. I always stop at the end for the fantastic view down towards Bigsweir, and the stunning Wye valley.

A good little climb over a few polished low lying rocks got us nearer to our objective, Tintern Abbey. Ok, yes, another café and bacon sarnie then if you insist! Whilst we were sat there we heard the 'ring ding ding' of the MODS, on their highly polished and tricked up scooters. A short clip of film catches their departure too  far away lands, like…err..Brighton maybe? Bacon eaten, pictures taken, we headed out and the clouds came upon us. The heavens opened whilst I pondered which lanes to avoid, and which we could ride. Lime Kiln lane was avoided this time, as it’s far too tricky for our victims… I mean beginners.

Cold and hard rain pebble dashed our faces as we traveled the tarmac trying to work out which lane next. So I headed for a nice long lane that’s tricky enough to catch you out, due to interspersed and embedded rocks along the way. All riders made it to the end safely apart from a brief pause on a very tricky climb at the start, a really good effort though Stu. Well done mate.

Tiredness and fatigue began to roll in quickly and the cold blast wasn’t helping. So one last lane brought us down a very steep and knarly descent nice and slowly until a nice big plasma telly sized rock blocked the lane and we were forced to slither up a slippery bank to the left high side to pass it. Loss of balance left Stu falling to the downhill side, but he was quickly up again and on his way with assistance.

A few miles and smiles had us all back to Ross on Wye in one piece. A hot cup of coffee for all, before they all head off home in their warm cars. Russell apparently was the the first one to nod off, and only ten minutes into the journey.

Well done ALL, and I seriously thought the newbie’s did really well, for your first baptism into trail riding. Also thanks go to Dave for helping with guidance for Russell, which helped the day along nicely. Mike you’re a star as well, for all the advice and support given throughout the day. The bonus was also that your Husky ran fine, which was definitely good news. I hope we can encourage you all along for another  ride out sometime soon, I know I enjoyed it and hope too see you all again soon.

Contact your local group to get invited out on your first trail ride.