The Teesside & North Yorkshire TRF coast to coast journey has become a classic in the TRF calendar. Two days of riding from one side of the country to the other taking in the rugged rolling landscape of northern England. It pulls in riders from all corners of the country, but this year it was local East Yorkshire TRF member Martyn Field who decided to find out what makes it so special.

I set off Tuesday morning in no great rush to arrive in Morecambe and planned a leisurely run across the Dales. Pateley Bridge, Kirkby Malham, Giggleswick, Low gill were a few of the places I passed through, the roads were lovely and quiet, the sun was shining and I had a big grin on my face thinking to myself ‘this definitely beats work’. I wanted to recce the start point for the following morning so headed into Hest Bank to find the little café on the shoreline. It was still only 3 o'clock so I pulled in had a coffee and piece of carrot cake taking in the views across Morecambe bay trying my hardest to spot the statues but failed to see them. Morecambe is a town I hadn’t visited for over 40 years, it’s certainly showing its age and decline from its hay day. I had placed a thread on the TRF forum a couple of days earlier asking if any other riders were planning to stay in Morecambe but didn’t have any replies so it was a “billy no mates night out” for me. I couldn’t fault the B & B I was booked in and the owner kindly steered me in the right direction to a lovely little steakhouse used mainly by the locals away from the candy floss and silly hats brigade. The next morning I was ip bright and early and with a hearty breakfast inside me I headed back to the Shore café for the 08:30 meet time. As I arrived around 08:15 there were around 25 or so bikes already in the car park. I recognised 2 faces from our group, Tim and Phil, so headed over to say hello and find out what was going on. Over the next 15–20 minutes more bikes and vans arrived. Leo the (organiser) started barking some orders and riders began forming various groups, 4 in all. Group 1 - Adventure bikes wishing to do a road route only Group 2 - Adventure bikes wishing to do the trails, which I joined Group 3 - Smaller trail bikes Group 4 - hard core enduro machines Leo was our lead on his big 990 adventurer. Quick brief of do’s and don’ts and a head count of the group in total and we were away. Heading across the black stuff Within 10 minutes of riding Leo turned off the country lane down a byway that, obviously due to the amount of undergrowth, hadn’t seen any traffic be it walkers or bikers for some time. I was second in line behind Leo as he bulldozed his way through the bushes and long grass. The track was steep in places heading down and down, my thoughts at the time were that we were heading into the abyss. After about 15 minutes we popped back out onto a road section, Leo was grinning from ear to ear as one by one we emerged from the track, sweat poring from our helmets and bike cooling fans going full blast.

Leo was still laughing then made the comment that we lost 3 bikes in that section last year with overheating clutches. It certainly grabbed our attention to what else was in store over the next 8 hours. The next challenge we came across was Doven Gill - a 100 meter length of bubbling brook, not deep but with some slippery boulders to negotiate. The first dipping of the day went to Chris on his Suzuki V Storm, unfortunately we did not get it on film. Next came a stretch of Lady Ann Clifford way from Outhgill to Askrigg with stunning scenery. The heavens decided to open just as we reached the iconic water cut sculpture so it was a very quick stop for a photo and away to find a little shelter from the heavy downpour back down in the valley below. After a pleasant lunch stop in Hawes where we met up with the other groups, the sun reappeared and we all quickly dried off from the earlier down pour. The remainder of the days riding consisted of un-kept roads, byways and single width country lanes, reaching our overnight stop at Scotch corner around 17:15Hrs. 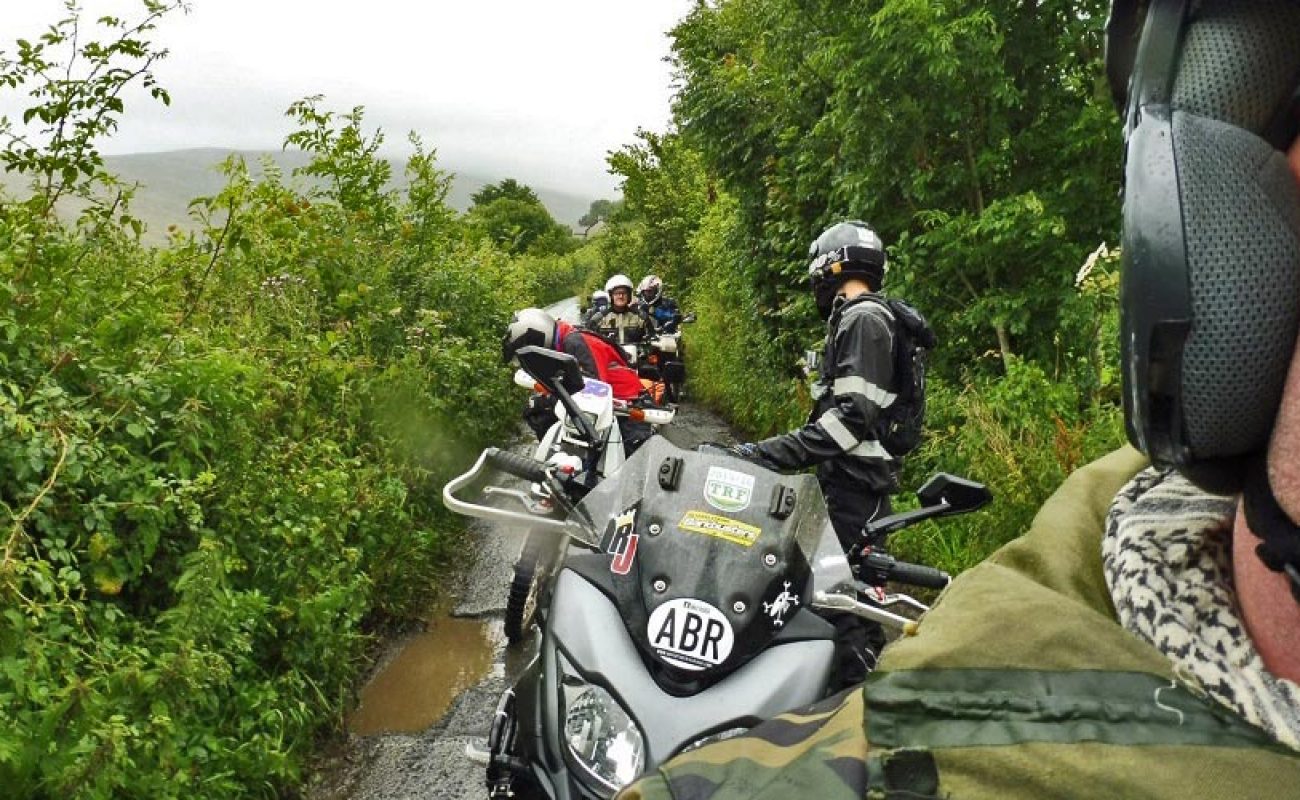 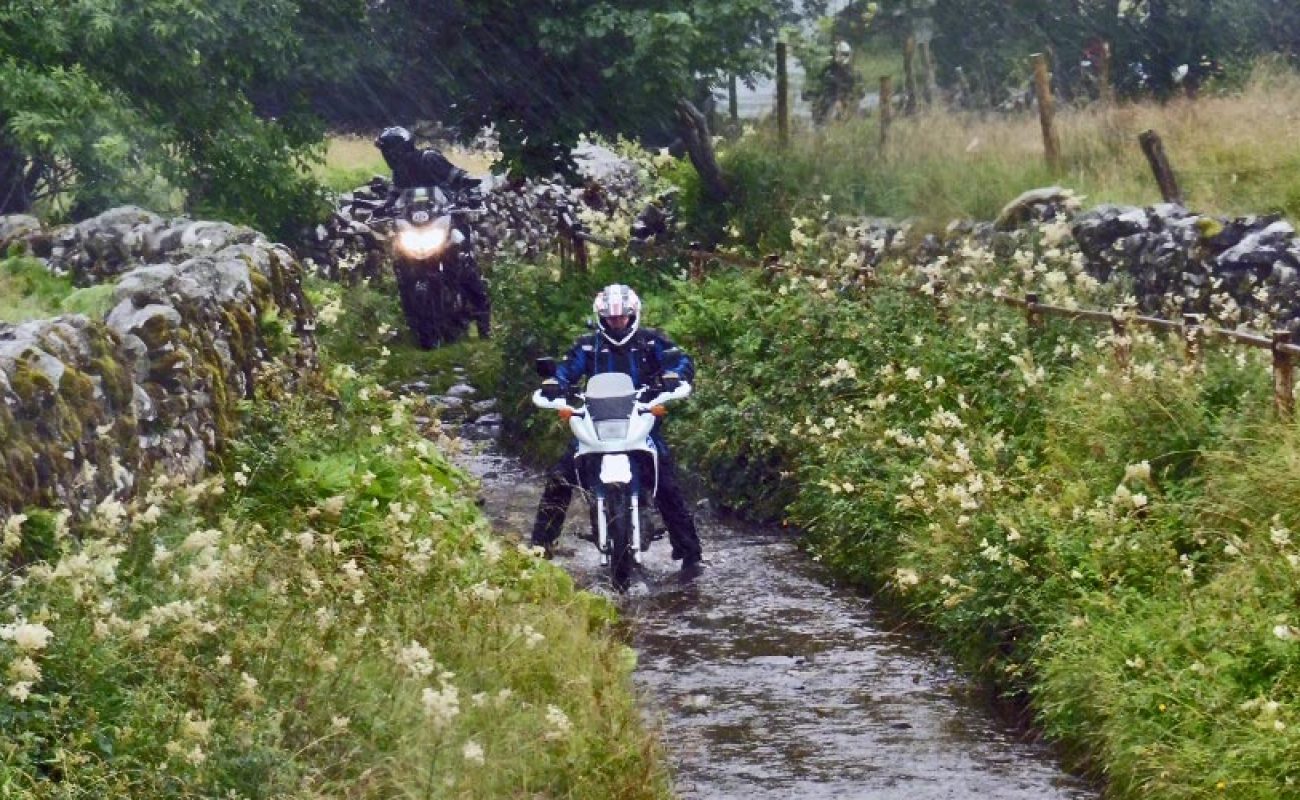 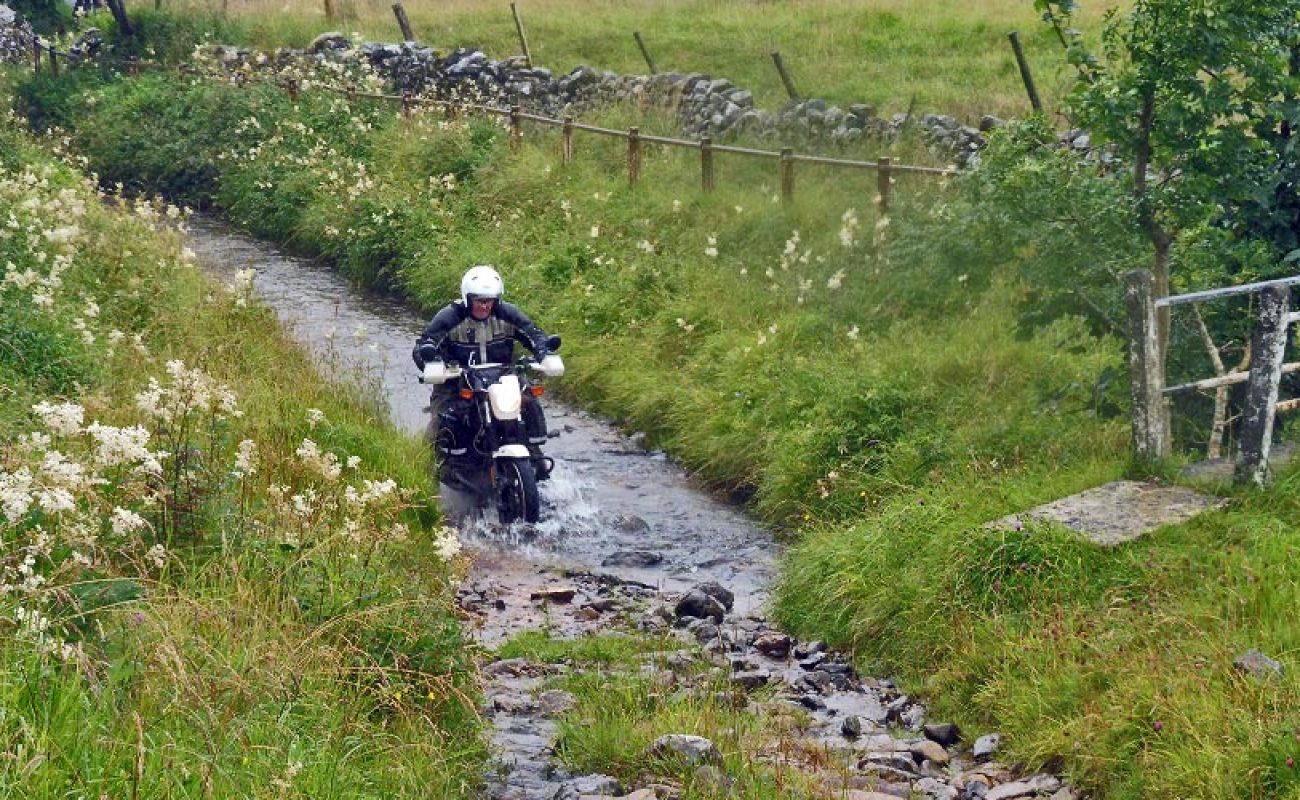 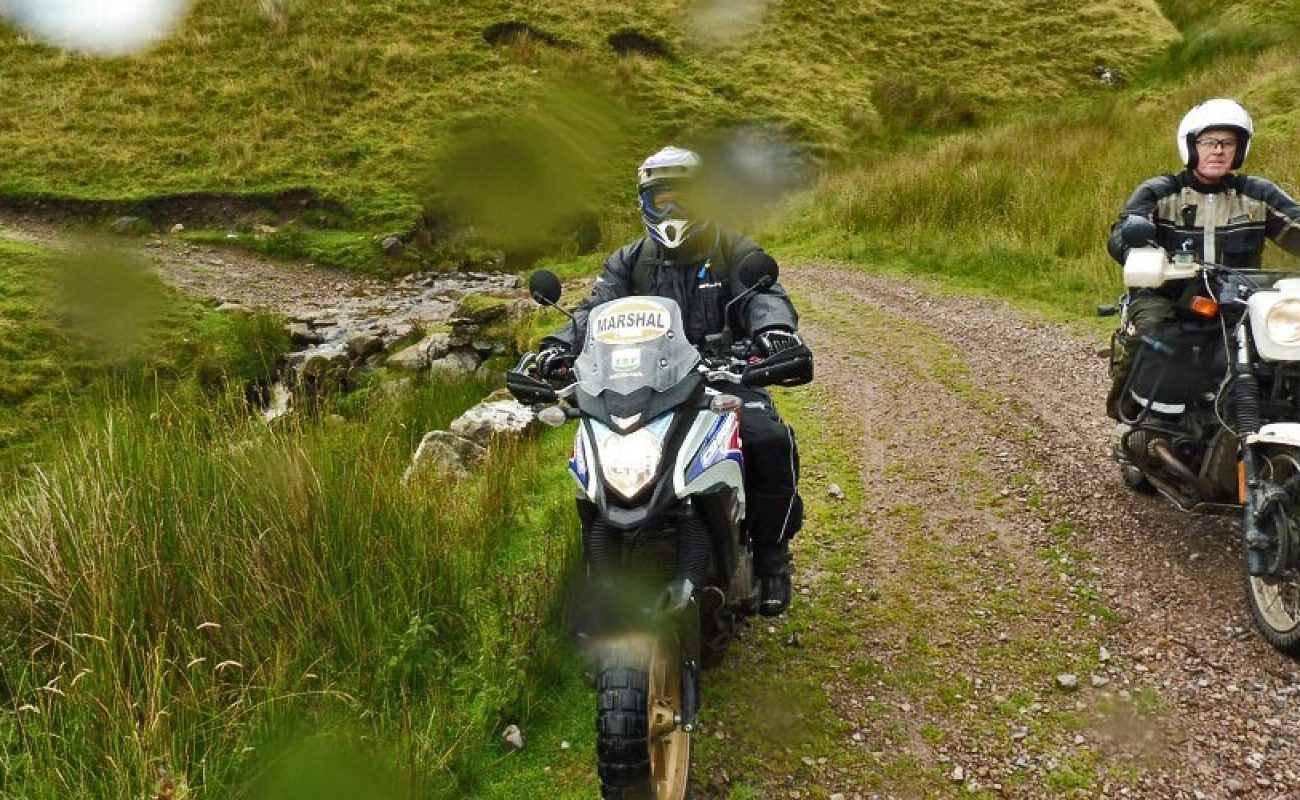 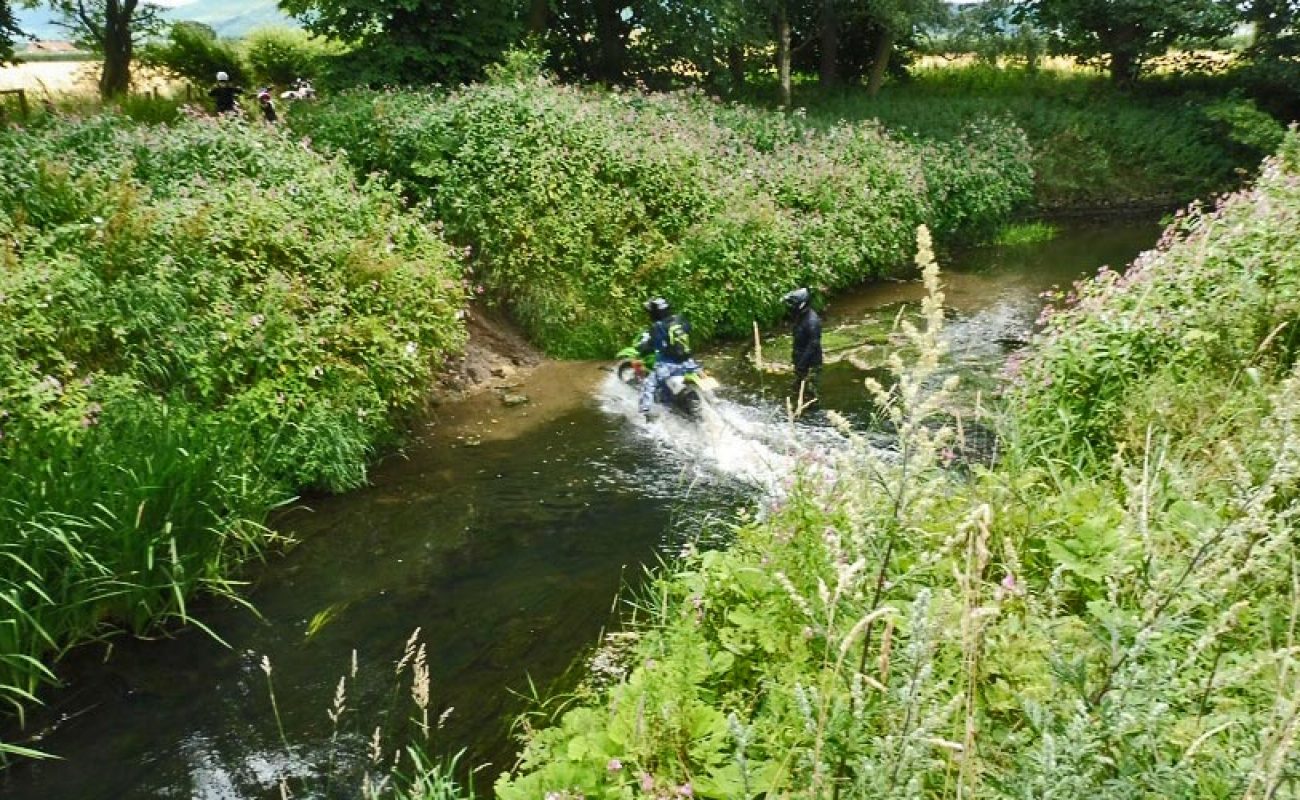 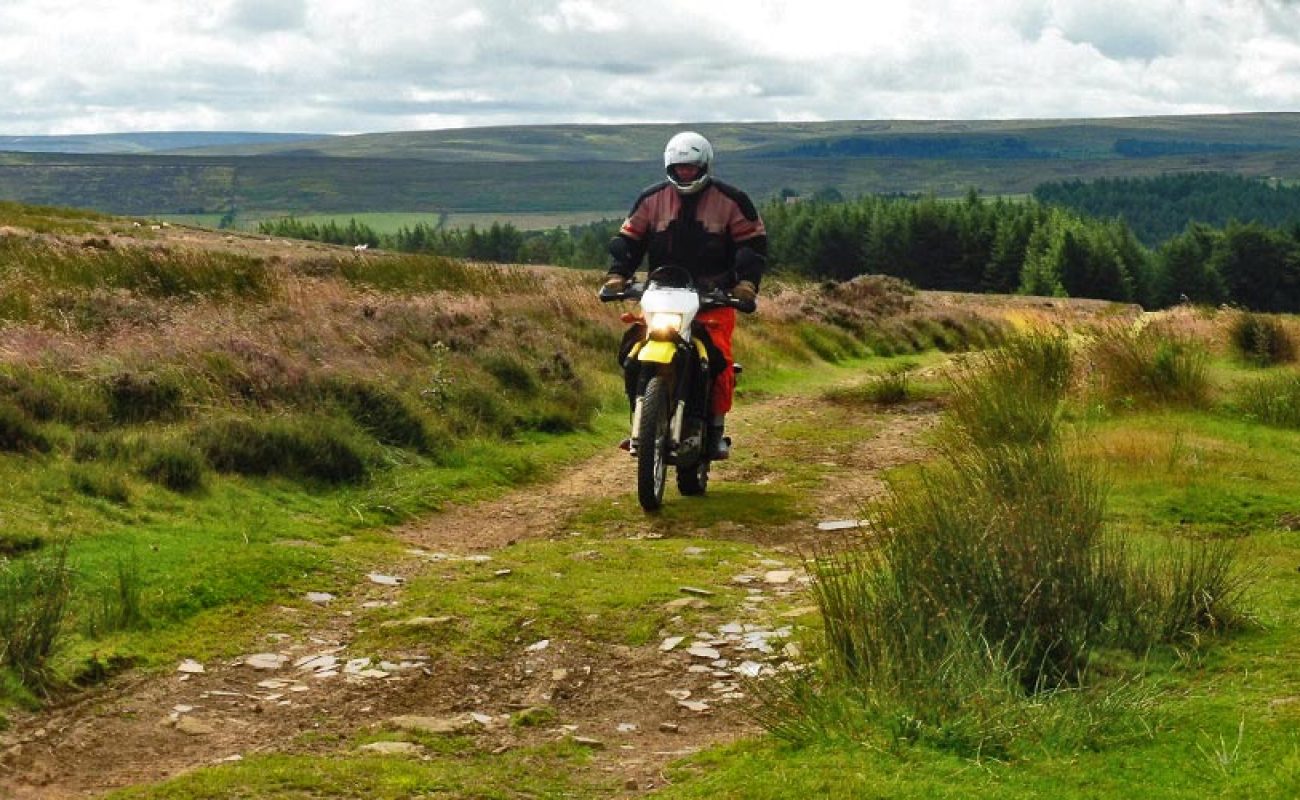 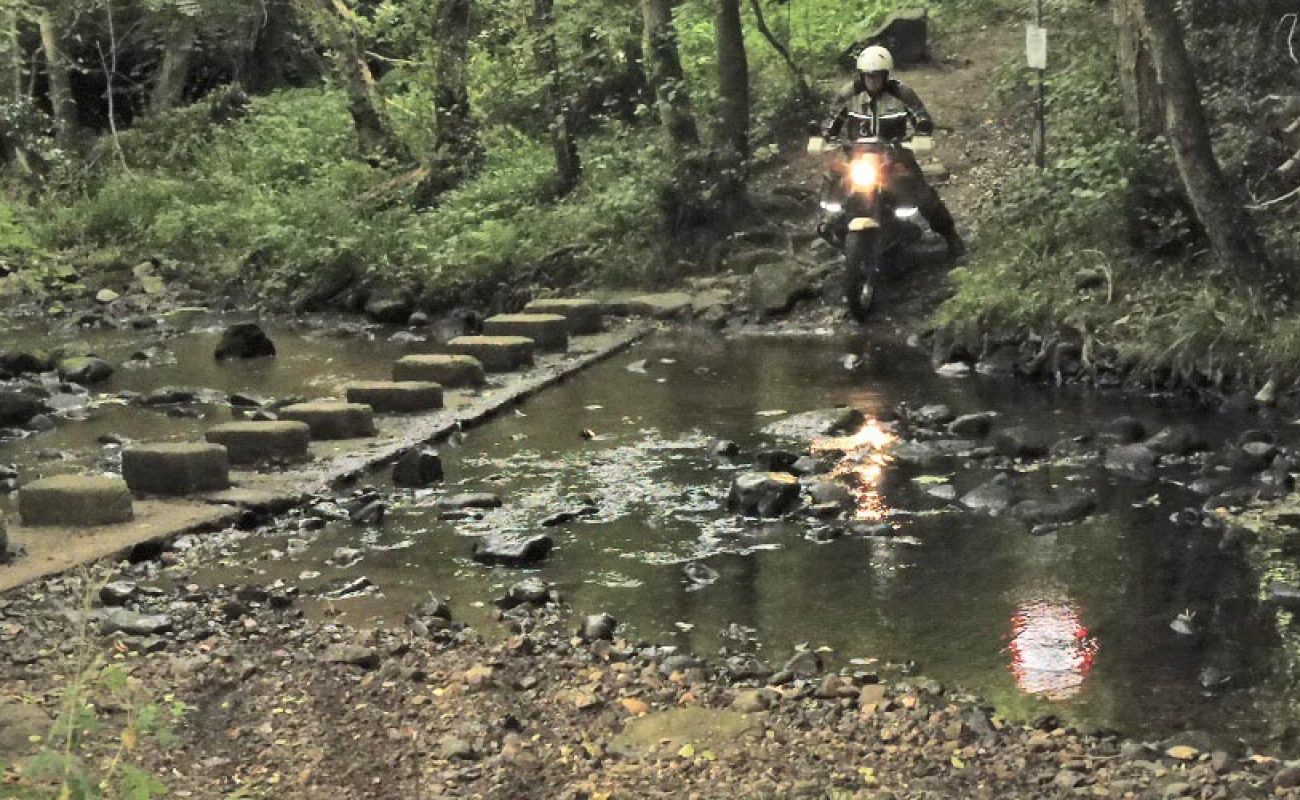 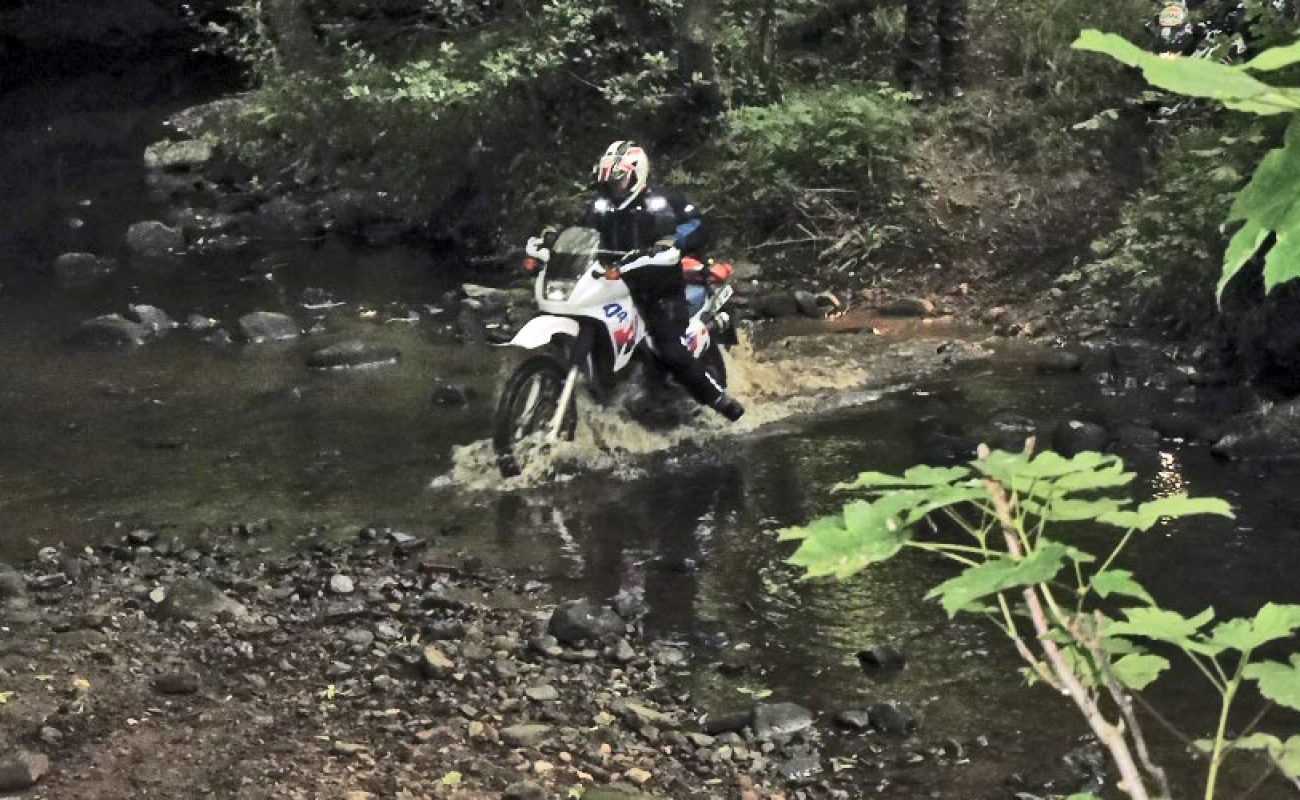 We hit the pub for a bite to eat and a pint which gave the group time to share a few interesting stories. Simon who was riding a 26 year old BMW R80 had only days earlier wheeled it out of this garage having not used it for over 10 years. He changed the battery put in some fresh fuel, 2 cranks on the button and she fired up. He continued his story saying 10 years earlier he and his wife had toured through India, China and Japan on the bike clocking up over 90000 miles.

Another character was Rob from Norwich in his late 60's who only started riding motorcycles in his mid 50’s. Happy chugging along on his DR 350 with a very strange choice of footwear, a pair of old wellies with duct tape wrapped round and round the top of them. When quizzed on his choice of footwear he replied “my feet never get wet”. A fair point but I think I will stick to boots. Two of the lads were over from Northern Ireland this being their 2nd trip on the C to C. Last year on their big GS 1200’s they found the going hard work and swapped for 2 nicely fettled XT 600’s this time round. The second day began bright and sunny, again a quick briefing from Leo on the ride heading towards the North York Moors and finishing in Scarbrough. Busby house Ford was the first wet challenge of the day and we were all safely across. We continued east across Goathlan Moor, Tom Cross Rigg, Thompsons Rigg, Brickley Gate Farm and Broxa Forest. At some point we rode a stretch of byway with a water crossing which I can’t remember the name of, Leo informed us that it had only recently reopened after winning an appeal in court. The day flew by and before we knew it we were riding along North Bay and our 2 day adventure was at an end. After a quick stop to collect our overnight gear from the van, we said our goodbyes and we were off our separate ways with the 2 Irish lads having to make a quick dash back across country to Liverpool to meet the ferry back to Belfast. For me it was a 30 minute ride back down the coast road and I was home, showered and beer in my hand sat in the garden getting the last of the sun planning the next adventure.

Fancy getting yourself on the next Coast to Coast? Keep an eye on the TRF Facebook Events Page to find out what's coming up... 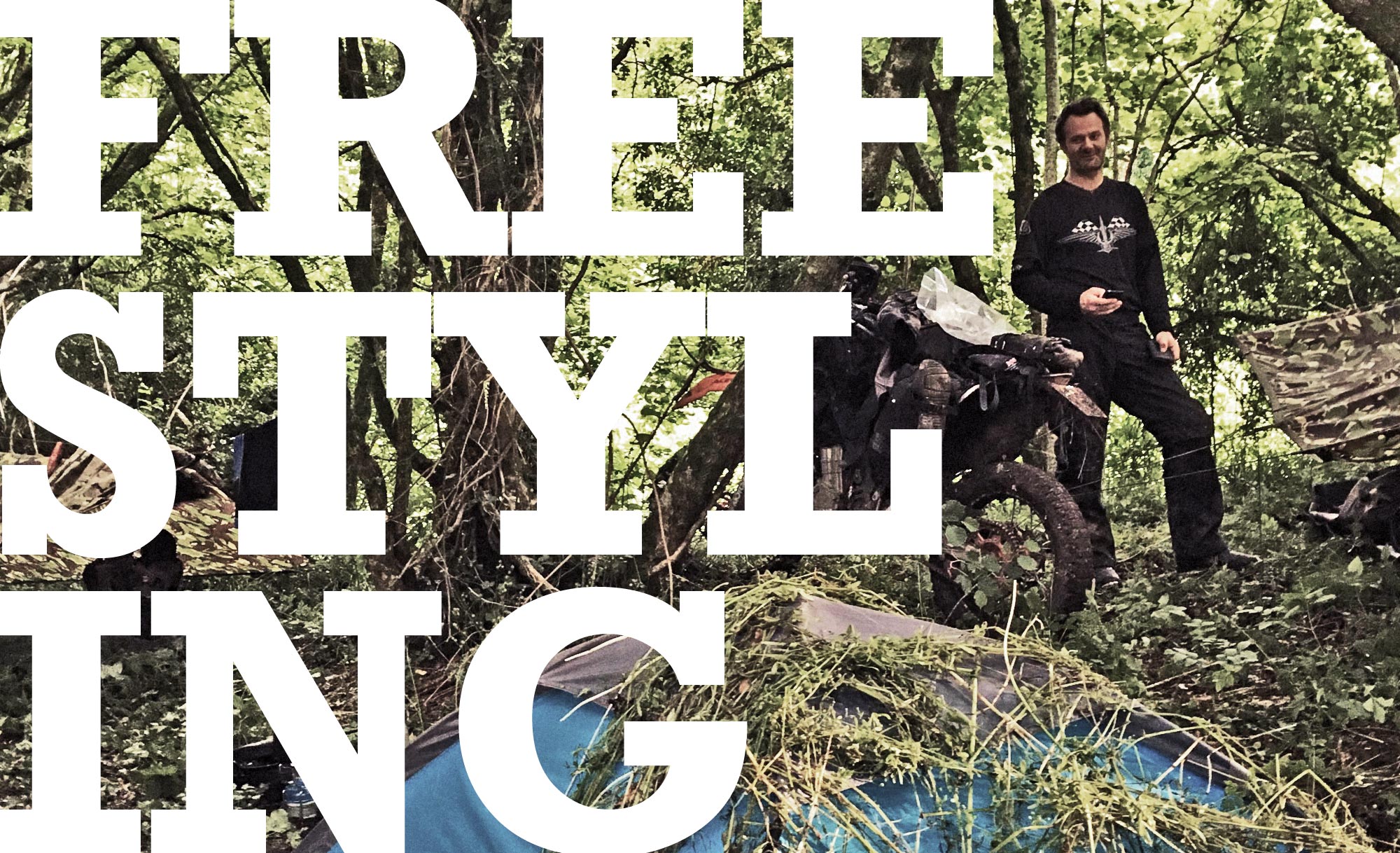